World Pompeo in London: Brexit Britain Is at Front of the Line for U.S. Trade
World 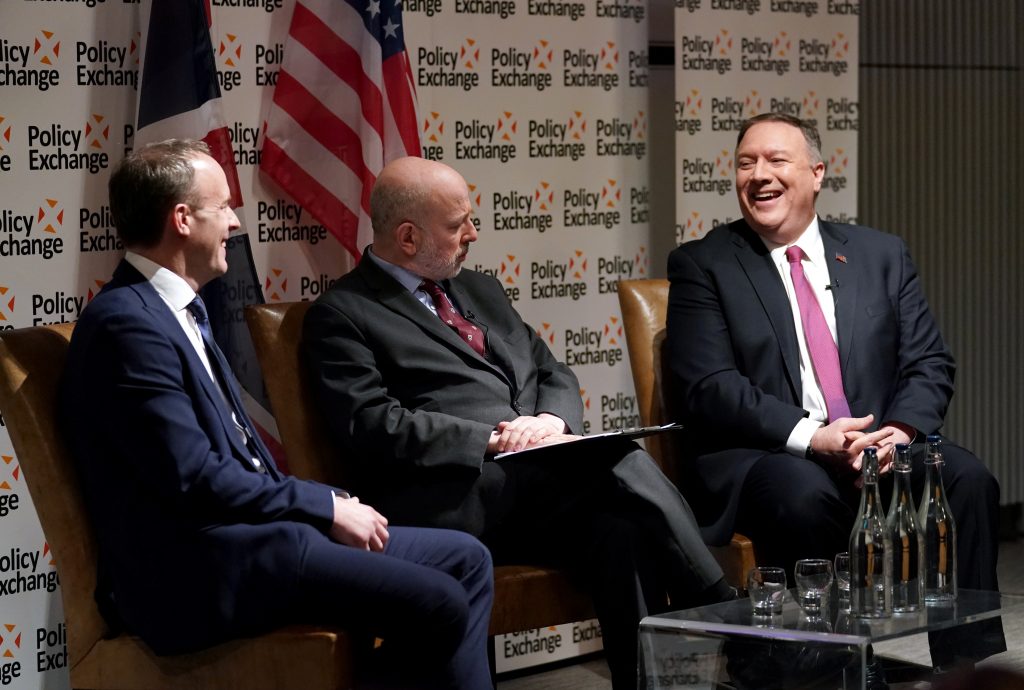 U.S. Secretary of State Mike Pompeo said Thursday that the U.S. and Britain would retain and enhance their special relationship once the U.K. leaves the European Union this week. He also said that American unhappiness with the British decision to allow the Chinese tech company Huawei to play a role in the country’s high-speed wireless network would not affect broader ties.

As President Donald Trump’s Senate impeachment trial neared a close in Washington, Pompeo met with British Prime Minister Boris Johnson to re-register American concerns about Huawei. But he stressed that he expected they could be addressed as more details emerge on what limits will be placed on the company and with advances in communications technology.

“That relationship is deep. It is strong, it will remain,” Pompeo said at an event with British Foreign Secretary Dominic Raab before meeting Johnson. “I am confident that as we work together to figure out how to implement this decision that we’ll work to get this right.”

“We were trying to make the case, as we made the case with every country in the world, that we think putting Huawei technology anywhere in your system is very, very difficult to mitigate and therefore not worth the gamble,” he said.

“But as we move forward together to make sure that next generation of technology is right, is secure and operates a under a Western set of values and system, we’ll get to the right place,” Pompeo said.

A State Department spokesman said the talks with Johnson focused on “strengthening bilateral ties” and “the importance of maintaining the integrity of communications networks.”

The U.S. has been lobbying European allies to ban Huawei over concerns it could be compelled to help with electronic eavesdropping after Beijing enacted a 2017 national intelligence law. U.S. officials also worry that 5G networks would rely heavily on software, leaving them open to vulnerabilities, and have repeatedly warned they would have to reconsider intelligence sharing with allies that use Huawei. The company has denied the allegations.

On Tuesday, Britain decided to let Huawei have a limited role supplying new high-speed network equipment to wireless carriers, ignoring Washington’s warnings that it would sever intelligence sharing if the company wasn’t banned.

Britain’s decision was the first by a major U.S. ally in Europe, and follows intense lobbying from the Trump administration as the U.S. vies with China for technological dominance.

Huawei is not expected to greatly affect negotiations on a post-Brexit free trade deal that Britain is counting on after its divorce from the EU on Friday. Trump has pledged that the U.S. and Britain will negotiate a major free-trade deal as soon as Brexit is complete and officials have already begun discussions on the plan.

Pompeo said that the U.S. would put Britain “at the front of the line” in its trade relationships and that the Trump administration had great confidence in the British people as they move ahead outside of the EU framework. He said he expected U.S.-British trade ties to exponentially increase once Britain is freed from EU commercial restrictions.

Pompeo is in London on the first leg of a trip to Europe and Central Asia that will also take him to Ukraine, Belarus, Kazakhstan and Uzbekistan.

The centerpiece of the trip will be a two-day stop in Ukraine that begins later Thursday when Pompeo will become the most senior U.S. official to visit Kyiv and meet with President Volodymyr Zelenskiy since the impeachment process began last year.

Pompeo has twice postponed earlier planned trips to Ukraine, most recently in early January when developments with Iran forced him to cancel. In Kyiv, Pompeo said he plans to discuss the issue of corruption but demurred when asked if he would specifically raise the Bidens or the energy company Burisma for which Hunter Biden worked.

“I don’t want to talk about particular individuals. It’s not worth it,” he told reporters aboard his plane to London. “It’s a long list in Ukraine of corrupt individuals and a long history there. And President Zelenskiy has told us he’s committed to it. The actions he’s taken so far demonstrate that, and I look forward to having a conversation about that with him as well.”