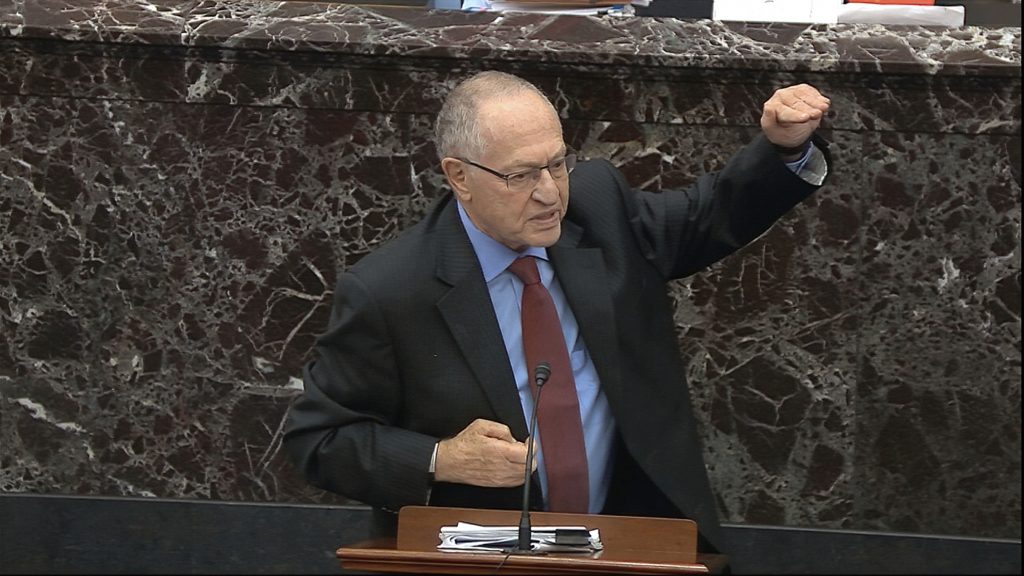 Meanwhile, President Trump’s Senate trial headed into a final day of questions and answers before a vote on whether or not to call witnesses — a decision that could send the proceedings to weeks of further action or a relatively abrupt acquittal.

In a day-after tweet, Dershowitz complained Thursday about the portrayal of his testimony Wednesday night that a president, if he believes his re-election is in the “national interest,” is essentially immune from impeachment for actions in support of that idea.

That argument left even some of Trump’s top allies backing away from the criminal attorney’s claim, though Dershowitz was testifying on Trump’s behalf at the Senate trial.

“They characterized my argument as if I had said that if a president believes that his re-election was in the national interest, he can do anything,” the retired professor said Thursday. “I said nothing like that, as anyone who actually heard what I said can attest.”

Dershowitz testified to the Senate jurors late Wednesday that the quid pro quo charge at the heart of Trump’s impeachment — a trade of U.S. military aid for political favors — even if proven, could not be grounds for his impeachment.

That argument was an abrupt turnaround from Trump’s own claim of “perfect” dealings with Ukraine.

One key Republican, Sen. Susan Collins of Maine, said only: “Yesterday was very interesting. That’s all I’m going to say.”

Meanwhile, Democrats are pressing hard to force the Senate to call more witnesses to testify, but Republicans appear intently focused on bringing the impeachment trial to a vote of acquittal, possibly in a matter of days. New revelations from former national security adviser John Bolton are being countered by the president’s lawyers, who used Wednesday’s unusual question-and-answer session to warn off prolonging the proceeding.

House Speaker Nancy Pelosi warned Trump on Thursday that a sham trial is not acquittal of the impeachment charges against him.

“You can’t be acquitted if you don’t have a trial,” said Pelosi, arguing anew that Trump will be “impeached forever.”

Said Pelosi, ‘I just pray that the senators will have the courage and the ability to handle the truth — rather than blocking the truth.”

Democrats argued Bolton’s forthcoming book cannot be ignored. It contends he personally heard Trump say he wanted military aid withheld from Ukraine until it agreed to investigate Joe Biden and his son, Hunter Biden — the abuse of power charge that is the first article of impeachment. Trump denies saying such a thing.

The vote on calling witnesses is expected by Friday.

At one point Wednesday night, as Chief Justice John Roberts fielded queries, Texas Republican Ted Cruz asked if it mattered whether there was a quid pro quo.

Simply, no, declared Dershowitz, who noted that politicians often equate their re-election with the public good. “That’s why it’s so dangerous to try to psychoanalyze a president,” he said.

“All quid pro quos are not the same,” he retorted. Some might be acceptable, some not. “And you don’t need to be a mind reader to figure out which is which. For one thing, you can ask John Bolton.”