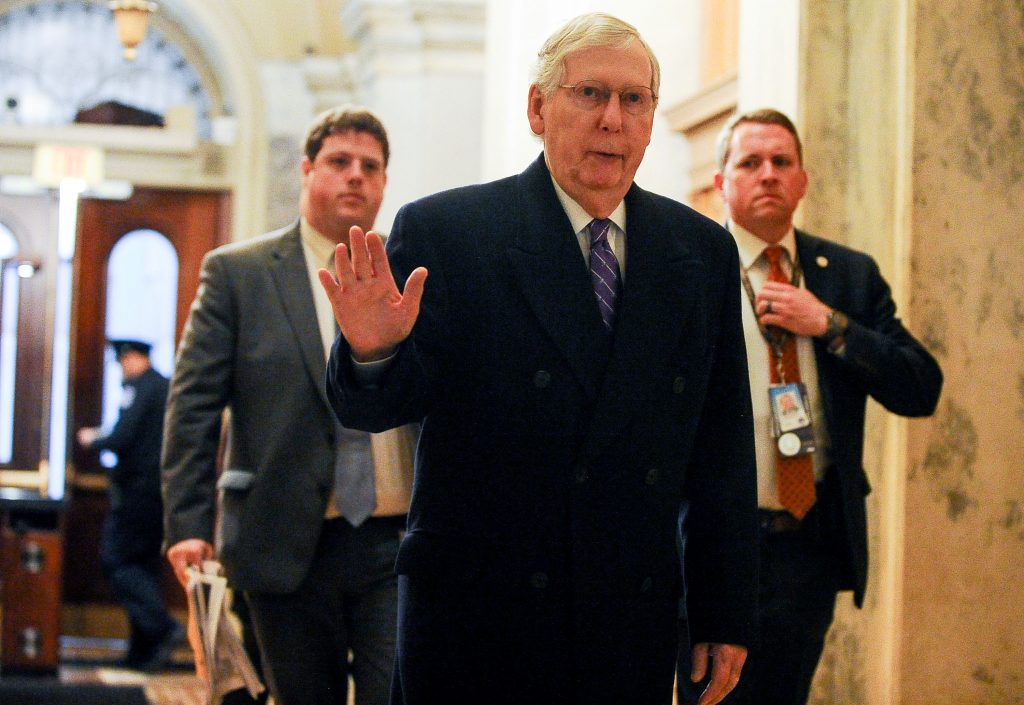 The White House on Wednesday objected to the publication of a book by President Donald Trump’s former national security adviser John Bolton depicting Trump as playing a central role in a pressure campaign on Ukraine, while members of the U.S. Senate asked a spree of questions in the impeachment trial.

A letter from the White House National Security Council to Bolton’s attorney said the manuscript, based on a preliminary review, appeared to contain “significant amounts of classified information.”

Some material was deemed top secret and could “cause exceptionally grave harm to the national security,” according to the letter dated Jan. 23 to Bolton’s lawyer. The letter surfaced with the Senate in the midst of a pitched battle over whether to remove Trump from office in part due to conduct described by Bolton in the manuscript.

Contradicting Trump’s version of events, Bolton wrote in the unpublished book manuscript that the president told him he wanted to freeze $391 million in security aid to Ukraine until Kiev pursued investigations into Democrats, including Biden and the former vice president’s son Hunter Biden, The New York Times reported.

The manuscript was submitted to the White House for pre-publication review, a process that civil libertarians have said gives the government too much power to censor speech.

Democrats view Bolton as a figure who could help them solidify their case against the president. Reports about the book’s contents appear to boost their arguments in the trial. Democrats want to call Bolton, a Republican foreign policy hawk, and a small number of other officials to testify. Trump’s fellow Republicans in the Senate have resisted the idea of having any witnesses.

The letter said the White House would be in touch with Bolton’s lawyer with “detailed guidance” for manuscript revisions.

Senators began the first of two planned days of posing questions to both Trump’s legal team and the Democratic lawmakers in the House of Representatives who have served as prosecutors in the trial on charges of abusing power and obstructing Congress arising from his alleged request that Ukraine investigate political rival Joe Biden.

The Senate is expected to acquit Trump but allowing witnesses such as Bolton could inflict political damage on him as he seeks re-election on Nov. 3. Biden is a leading candidate for the Democratic nomination to challenge Trump.

Bolton’s allegations go to the heart of the impeachment charges. Democrats have said Trump abused his power by using the security aid – passed by Congress to help Ukraine battle Russia-backed separatists – as leverage to get a foreign power to smear a political rival. Trump’s legal team has argued that the evidence supporting that allegation is based on hearsay.

A Bolton spokeswoman had no comment on the White House letter. Neither his publisher nor lawyer immediately responded to requests for comment.

A Vote on Witnesses

The Senate is expected on Friday to vote on whether to call witnesses. Democrats need four Republicans to join them to get a majority in the 100-seat Senate. Republican leaders are hoping to vote as quickly as possible to acquit Trump, leaving him in office.

Removing Trump from office would take a two-thirds majority. There are 53 Republican senators and none has publicly advocated removal. The Democratic-led House impeached Trump last month.

Trump added that Bolton, who left his White House post in September, “goes out and IMMEDIATELY writes a nasty & untrue book. All Classified National Security. Who would do this?”

Trump, who has denied Bolton’s account, has said he fired Bolton. Bolton, a foreign policy hawk who served as a temporary “recess appointee” as American ambassador to the United Nations under Republican former President George W. Bush, has said he quit.

Responding to a question by top Senate Democrat Chuck Schumer, lead House prosecutor Adam Schiff said there would be no way to have a fair trial without witnesses.

“And when you have a witness as plainly relevant as John Bolton who goes to the heart of the most serious and most egregious of the president’s misconduct, who has volunteered to come and testify — to turn him away, to look the other way, I think is deeply at odds with being an impartial juror,” Schiff said.

Democratic questions prompted answers from House prosecutors that Trump did not need to have committed a statutory crime to be convicted. Republicans asked Trump’s lawyers questions aimed at convincing senators that the House impeachment process was illegitimate from the start.

Senators submitted questions in writing to be read aloud by Supreme Court Chief Justice John Roberts, who is presiding over the trial.