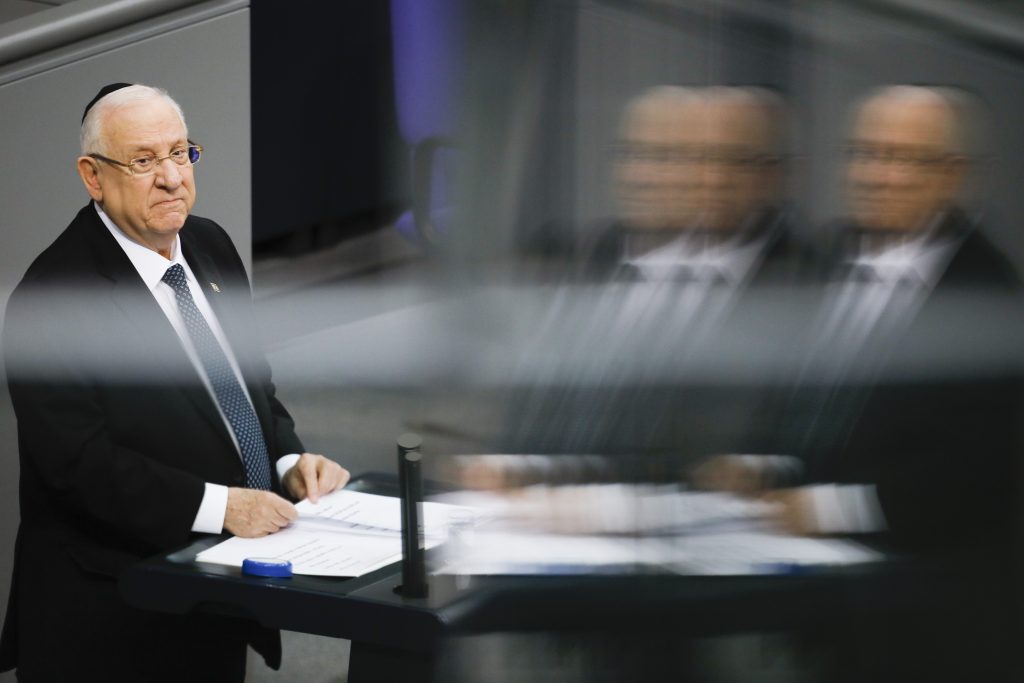 Lamenting rising anti-Semitism in Europe, Israel’s president said Germany “must not fail” in fighting it as he addressed German lawmakers Wednesday to mark the 75th anniversary of the Auschwitz death camp’s liberation.

President Reuven Rivlin’s address to parliament capped a three-day visit to Germany that started when he flew to Berlin from anniversary events at the Auschwitz site on Monday with German counterpart Frank-Walter Steinmeier.

Rivlin, who recalled protesting when West Germany sent its first ambassador to Israel in 1965, praised today’s Germany as “a beacon for democracy, for liberalism, for responsibility and moderate forces.” He said that gives Germany “enormous” responsibility at a time when there are “other trends” in Europe and elsewhere.

“Today, Europe is being haunted by the ghosts of the past — racial purity, nationalism, xenophobia, anti-Semitism,” said Rivlin, who spoke through an interpreter. “Ugly and extreme anti-Semitism is wafting over all of Europe, from the far-right to extreme left-wingers.”

“It is important to me to bear in mind that we are certainly not in the 1930s — we are not on the threshold of a new Shoah, and we are not even close to that,” he said. But, he said, the stirring of anti-Semitism and xenophobia must not be ignored.

Rising concern in Germany about anti-Semitism was intensified by an incident in October in which a man tried to force his way into a synagogue in Halle on Yom Kippur, then killed two passers-by before being arrested. The suspect posted an anti-Jewish screed before the attack.

On Sunday, Germany’s foreign minister called for stepped-up efforts to ward off the possibility that many Jews could decide to leave the country.

Rivlin said the fight against anti-Semitism must be fought “persistently, generation for generation.”

Germany “has taken responsibility for the protection of international liberal values,” Rivlin added. “If this attempt fails in Germany … it will be condemned to fail everywhere.”

In his speech, Rivlin also acknowledged differences over Iran. Germany is one of the countries trying to keep alive Iran’s nuclear deal with world powers that the U.S. abandoned in 2018.

“Such a regime is a risk to world peace,” he said. “There is only possibility: we must isolate this regime.”

Rivlin also addressed the newly released U.S. plan to end the Israeli-Palestinian conflict that has already been rejected by the Palestinians. He said both sides must examine the plan carefully and he hopes it will be implemented.