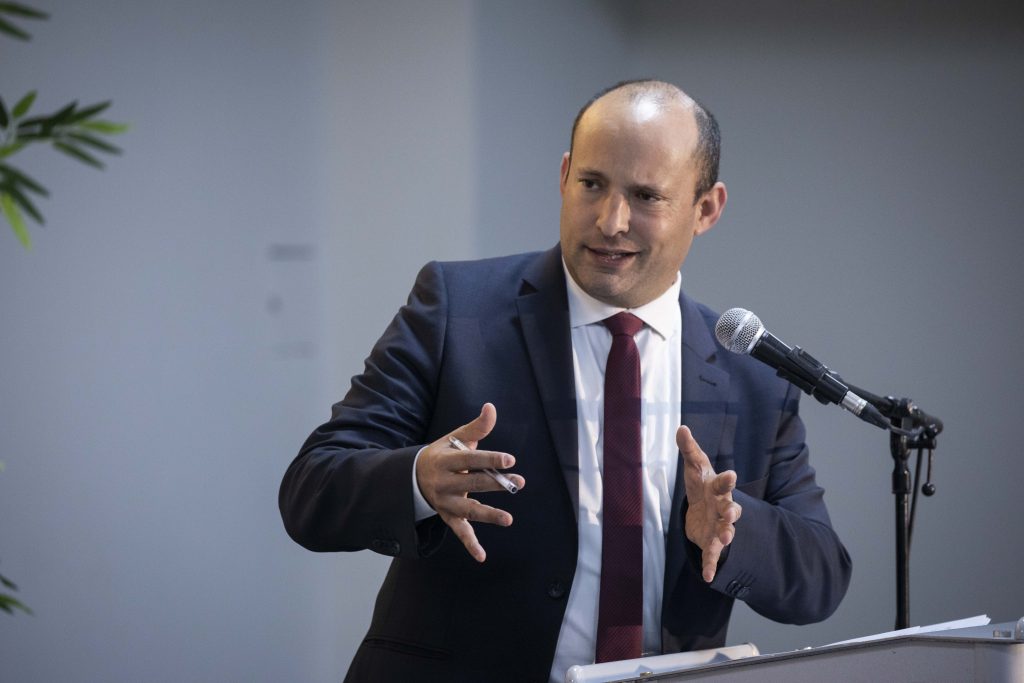 Defense Minister Naftali Bennett said Wednesday that a special panel would be established in the coming days to examine specific issues relating to the imposition of Israeli sovereignty on areas of Yehudah and Shomron and on the Jordan Valley. “History knocked on our door Tuesday and gave us a one-time opportunity to impose Israeli law on all settlements,” Bennett said at a speech he gave at the Institute for National Security Studies. “I have ordered the establishment of a panel that will work toward achieving this goal. The panel can start working immediately and it will include members of the security establishment.”

At a ceremony introducing details of President Donald Trump’s “deal of the century” peace plan Tuesday, Netanyahu said that “Israel will apply its laws to the Jordan Valley, to all the Jewish communities in Judea and Samaria, and to other areas that your plan designates as part of Israel and which the United States has agreed to recognize as part of Israel.”

Bennett insisted that that take place at the next Cabinet meeting on Sunday. “Seven years ago I realized that there was a problem on the right, that we always said what we didn’t want [a Palestinian state] and not what we do want. I published my sovereignty plan, which gives Israel sovereignty over 60% of Yehudah and Shomron. Back then it wasn’t so relevant, it was a distant dream. The Trump plan allows us to impose sovereignty on half of the area, and united Yerushalayim will be a part of this. This is the greatest diplomatic opportunity we have ever had, but it is an opportunity that can pass. It’s like a train that reaches the station – if you don’t get on, you miss it. The big question is if we will take the opportunity or miss it.”

The latter is a distinct possibility if, as some have implied, implementing the plan waited for after the elections. “On Tuesday, advisors to the prime minister said that the sovereignty issue would be decided Sunday, but today there are already different voices, with some saying that the plan has to be implemented in stages, some of them after the elections. Some have said that sovereignty will be imposed on buildings first and then on the land and towns. The problem would then be that the houses and buildings would be isolated. If we leave these decisions until after the elections they will never happen. Any land that does not become part of Israel now will remain outside for 50 years,” Bennett said.