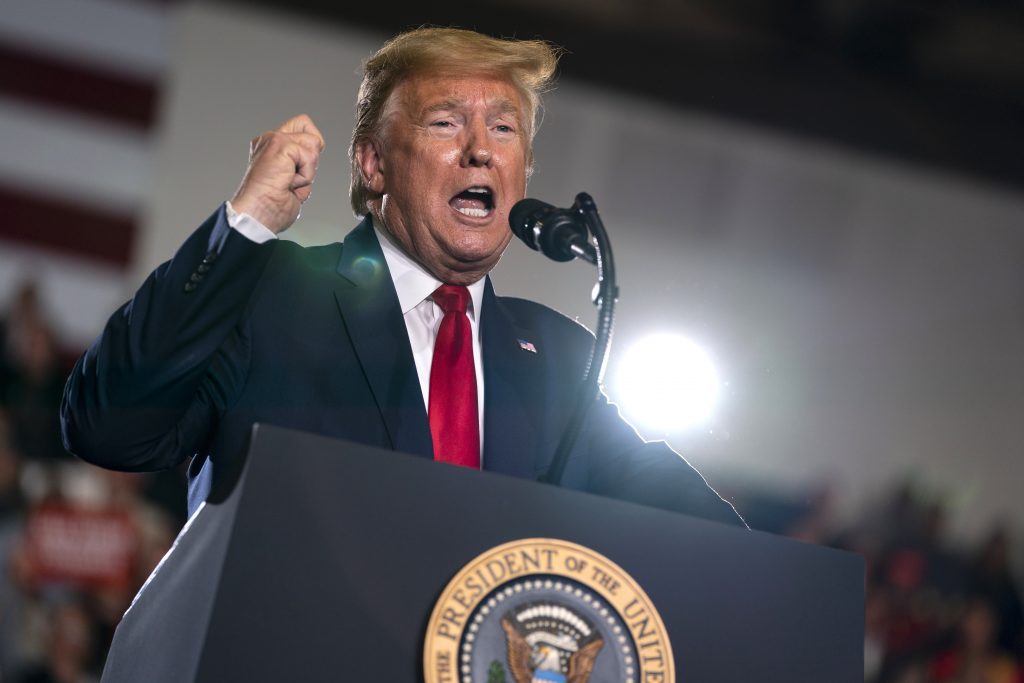 Moving on several fronts toward shoring up support for his reelection bid, President Donald Trump capped off a busy Tuesday by heaping praise on the newest Republican member of Congress and savaging Democrats he said are engaged in “demented hoaxes” like his impeachment trial.

On the day his legal team wrapped up its opening arguments on the Senate floor, Trump spoke to an enthusiastic audience in New Jersey in support of Rep. Jeff Van Drew, who recently switched from the Democratic Party to the GOP after breaking ranks over impeachment.

“While we are creating jobs and killing terrorists, the congressional Democrats are obsessed with demented hoaxes, crazy witch hunts and deranged partisan crusades. That’s all they know how to do,” Trump said.

Trump’s visit to Democratic-leaning New Jersey generated a boisterous audience that lined the streets to greet him during a critical moment in his presidency. He called Van Drew on stage, saying, “Jeff had the guts to defy the left-wing fanatics in his own party.”

Trump highlighted the economy during much of his speech, noting that 7 million jobs have been created since his election. He also continued to boast of the U.S. drone strike in Baghdad that killed Iran’s most powerful general, Qassem Soleimani, on Jan. 3. He cited the strike while attacking his political rivals with language that was incendiary even for a Trump rally.

“We stopped him cold, yet Washington Democrats like crazy Bernie Sanders and nervous Nancy Pelosi, they opposed our actions to save American lives. They opposed it,” Trump asserted to a roar of boos.

Pelosi and other Democrats have questioned the strategy behind Trump’s order to kill Iran’s general, which was made without prior approval from Congress. They pointed to potential consequences of heightened tensions that could endanger U.S. troops and lead to war with Iran.

On Tuesday, Trump sought to push past the ongoing impeachment trial that has cast a shadow over the White House. Earlier in the day, he released a Middle East peace plan that was immediately met with skepticism that it would go anywhere without Palestinian buy-in. But Trump’s proposal was about more than how the plan would play out in the troubled region. It was also an effort to keep his promises to some of his most ardent supporters at home.

Trump’s strong pro-Israel position has brought him support from Zionist Jews and evangelical Christians. Trump enjoys robust support from evangelicals, and his first campaign event of 2020 was a speech to conservative Christians in Miami.

Minutes after Trump finished unveiling his plan, the president’s impeachment trial resumed at the other end of Pennsylvania Avenue, where his legal team was wrapping up its defense presentation. Trump had demanded that his legal team use its three days to offer a robust televised defense of his actions and play not just to the 100 senators in the chamber but also to the millions watching at home.

Although Trump’s acquittal by the Republican-controlled Senate is all but assured, his team has tried to minimize the political damage. And the president is hoping to use impeachment to motivate his political base and independents disenchanted with impeachment to turn out in greater numbers this fall.

Jay Sekulow, one of his lawyers, used his time before the Senate to offer a greatest-hits list of attacks against Trump’s perceived foes — from ousted FBI agents to secret federal courts — and to highlight what he saw as politically driven maneuvering by the Democrats to oust the president.

“Danger, danger, danger,” he told senators. “That’s politics. You’re being called upon to remove the duly elected president of the United States. That’s what these articles of impeachment call for.”

White House counsel Pat Cipollone, also part of the defense, added: “What they are asking you do is to throw out a successful president on the eve of an election, with no basis, and in violation of the Constitution.”

While Trump’s lawyers argued that the Democrats were trying to undo the last election, the president’s focus on Tuesday night was on the next one. For his first rally since the Senate trial began, Trump was traveling not to a 2020 battleground state but instead to the Democratic stronghold of New Jersey.

Remaining largely disciplined, Trump avoided the specifics of the impeachment trial and did not mention the name of his former national security adviser John Bolton, whom Democrats want to call as a witness in the case. But Trump mused at the rally about competing in New Jersey this election — he lost by double-digit percentage points in 2016 — and polled the crowd about whether he should hold a rally at the state’s famed Meadowland Sports Complex over the summer

The setting was atypical for Trump: a Jersey shore town where people camped out overnight on the beach to get a spot in line for the rally being held at a boardwalk convention center. Van Drew, who attended the rally, said Trump has helped restore the military and protect the economy. “Do we want to keep it that way?” he asked the crowd.