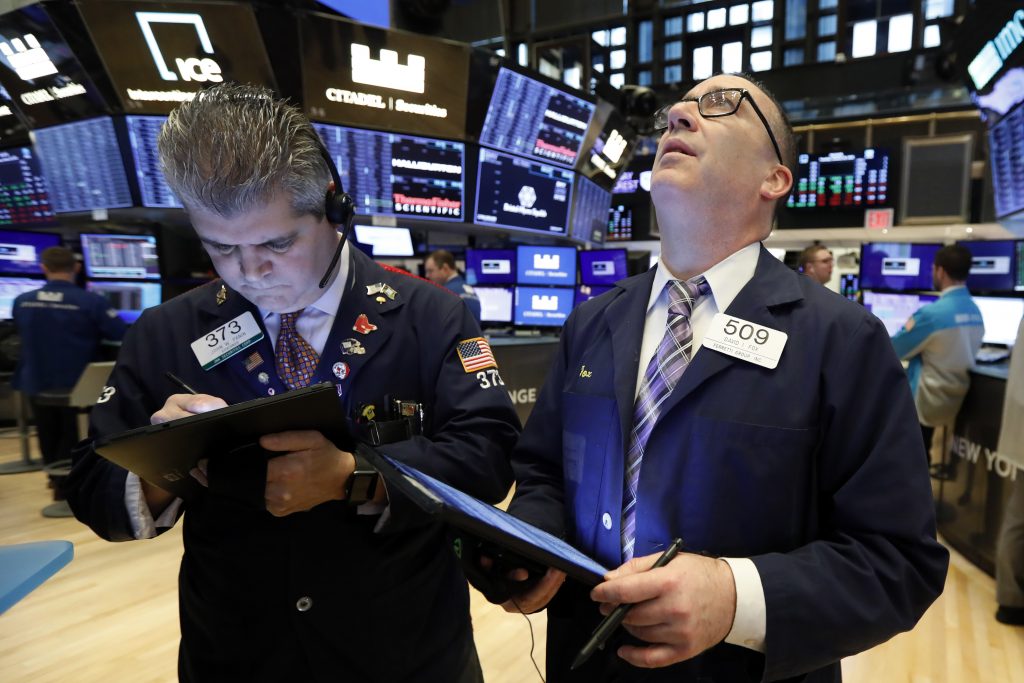 Stocks are closing broadly higher on Wall Street, reversing most of their losses from a sell-off the day before. The gains on Tuesday snapped a two-day skid driven by fears that the spread of a new virus in China could hamper global economic growth. Technology stocks rose the most. Banks and other financial companies also climbed, along with communications stocks. The S&P 500 index rose 32 points, or 1%, to 3,276. The Dow Jones Industrial Average added 187, or 0.7%, to 28,722, and the Nasdaq rose 130, or 1.4%, to 9,269. Bond prices fell. The 10-year Treasury yield rose to 1.65%.

Stocks moved broadly higher on Wall Street in afternoon trading Tuesday, reversing most of the indexes’ losses from a sell-off the day before.

The gains placed the market on track to snap a two-day skid fueled by fears that the spread of a new virus in China could hamper global economic growth.

The rebound comes as the United States and several other nations prepared Tuesday to airlift citizens out of a Chinese city at the center of the outbreak, which has killed more than 100 people.

Technology stocks were the biggest gainers. Apple, which reports earnings later Tuesday, climbed 2.9% and was one of the biggest gainers in the tech sector. Chipmakers including Intel also made solid gains. Many of those companies are affected by China’s economy because they rely heavily on that nation for sales and supply chains.

Wall Street is in the midst of a heavy week for corporate earnings and investors have some key companies to assess. Starbucks will report its results later Tuesday. Boeing, McDonald’s, Facebook and Microsoft will all report results on Wednesday. Other big names reporting this week include Coca-Cola, Amazon, Caterpillar and Exxon Mobil.

VIRUS STATUS: More than 4,500 people have been confirmed ill with the virus and 106 have died in the outbreak of a new coronavirus centered in the Chinese city of Wuhan, an industrial hub along the Yangtze river. The virus has now spread to more than a dozen countries.

Hong Kong has joined much of China in seriously restricting travel by cutting all rail links to the mainland. China’s containment efforts began with the suspension of plane, train and bus links to Wuhan and has now expanded to 17 cities with more than 50 million people in the most far-reaching disease-control measures ever imposed.

MORE HOSPITABLE: Shares in casino operators, hotel chains, cruise lines and other travel-related companies recouped some of the losses over the past few days as worries about the virus outbreak’s impact on tourism hammered the stocks.

WEAK DOSE: Pfizer slid 5.3% after the biggest U.S. drugmaker reported disappointing fourth-quarter earnings. The company’s revenue fell during the quarter as it continues to slim down and focus on developing new drugs. It moved its huge stable of nonprescription medicines into a new joint venture with GlaxoSmithKline last year.

BUYING PARTS: Auto parts supplier BorgWarner sank 8% after saying it will buy Delphi Technologies for about $3.3 billion. The deal will help strengthen the company’s power electronic products, but it comes along with a warning to investors about potentially weak sales in 2020, particularly for light and commercial vehicles.

THIN HOG: Harley-Davidson dropped 2.6% after the storied motorcycle maker reported weak fourth-quarter earnings and revenue. The company had a tough quarter for U.S. sales, which led the overall worldwide drop.