Amid heightened attention to violent attacks on Orthodox Jews in and around New York City, Attorney General William Barr paid a visit to Boro Park to discuss the ongoing threat with leaders of major Jewish organizations.

In the sprawling meeting that lasted around an hour and a half, the Attorney General made strong pledges of support to use the power of his office to address the issue.

“I am extremely distressed by the upsurge in hate crimes against the Jewish community,” he said in his opening remarks. “This department will have zero tolerance for this type of violence…[which] strikes at the core of what our country is about.”

Attorney General Barr discussed several practical steps that the Department of Justice (DOJ) would take, aimed at combatting the trend. He said that he had instructed each of the regional U.S. Attorney offices to initiate outreach to local Jewish communities and to establish a hub for the reporting and investigation of anti-Semitic incidents.

The Attorney General also announced that Tiffany Harris, a Brooklyn woman who was arrested this past December for several assaults on Jewish women, has been charged with federal crimes. This story attracted more attention than many other similar incidents, as the suspect was initially arrested after the first assault, only to be quickly released and commit similar crimes days later – shining a critical spotlight on New York State’s recently enacted criminal justice reform laws.

While it is not typical for a relatively low-level crime to warrant charges from the DOJ, the Attorney General said that under the circumstances, the action would send a necessary message of the seriousness with which his department is taking such incidents. 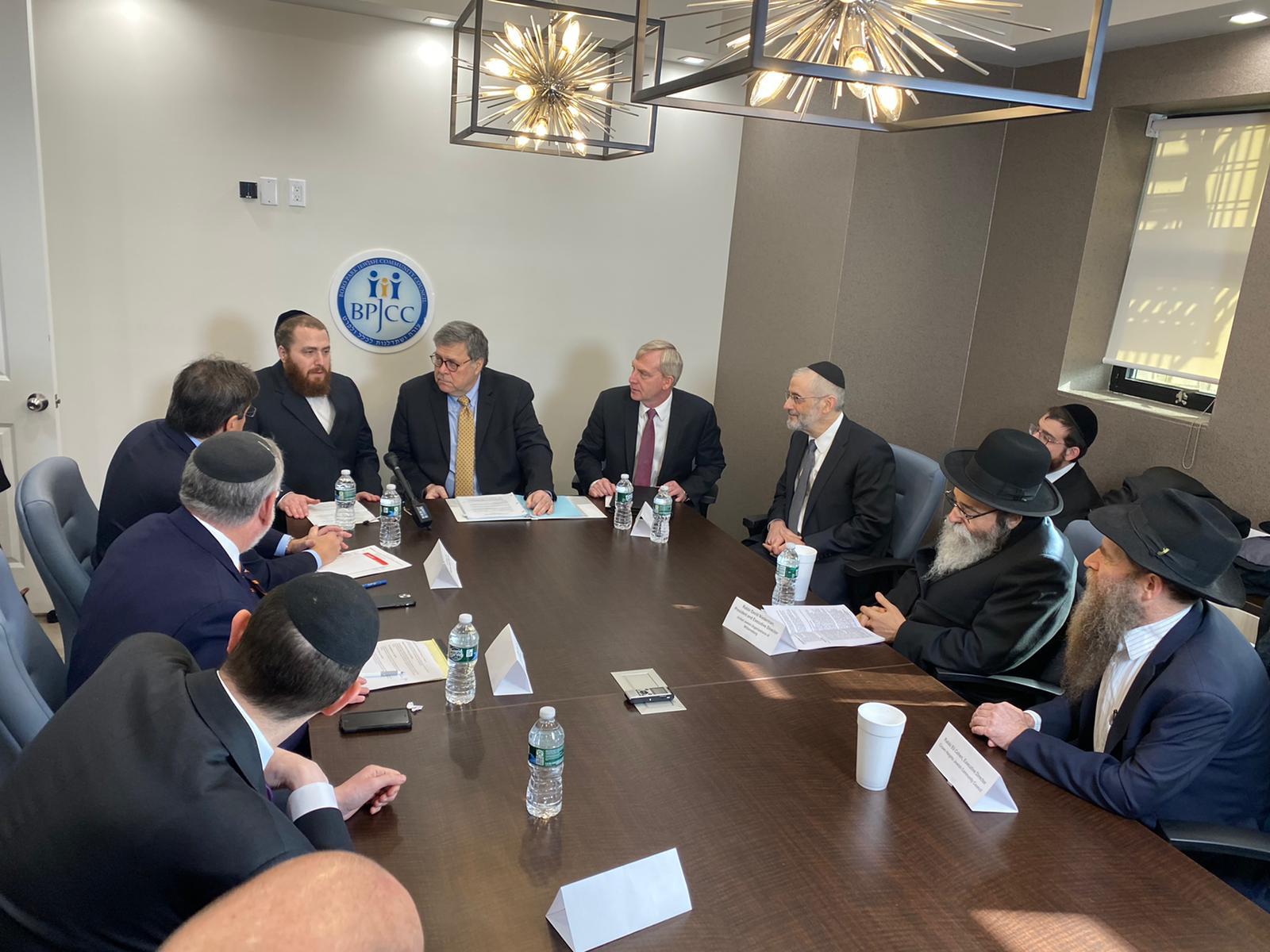 Held at the offices of the Boro Park Jewish Community Council (BPJCC), the meeting was conducted as a roundtable, with representatives of each organization airing their specific concerns over the increase in anti-Semitic attacks and other threats facing the community.

Attorney General Barr, a New York native, has a long history of defending the rights of religious groups, and specifically the Orthodox community.

While serving in the administration of former President George H.W. Bush, he was the key player in the Department of Justice (DOJ) decision to sue the Village of Airmont, which borders Monsey, over moves widely seen as attempts to prevent Orthodox Jews from moving to the area.

The decades-old working relationship was apparent as the Attorney General, in his signature low-key tone, exchanged views comfortably with the assembled group. 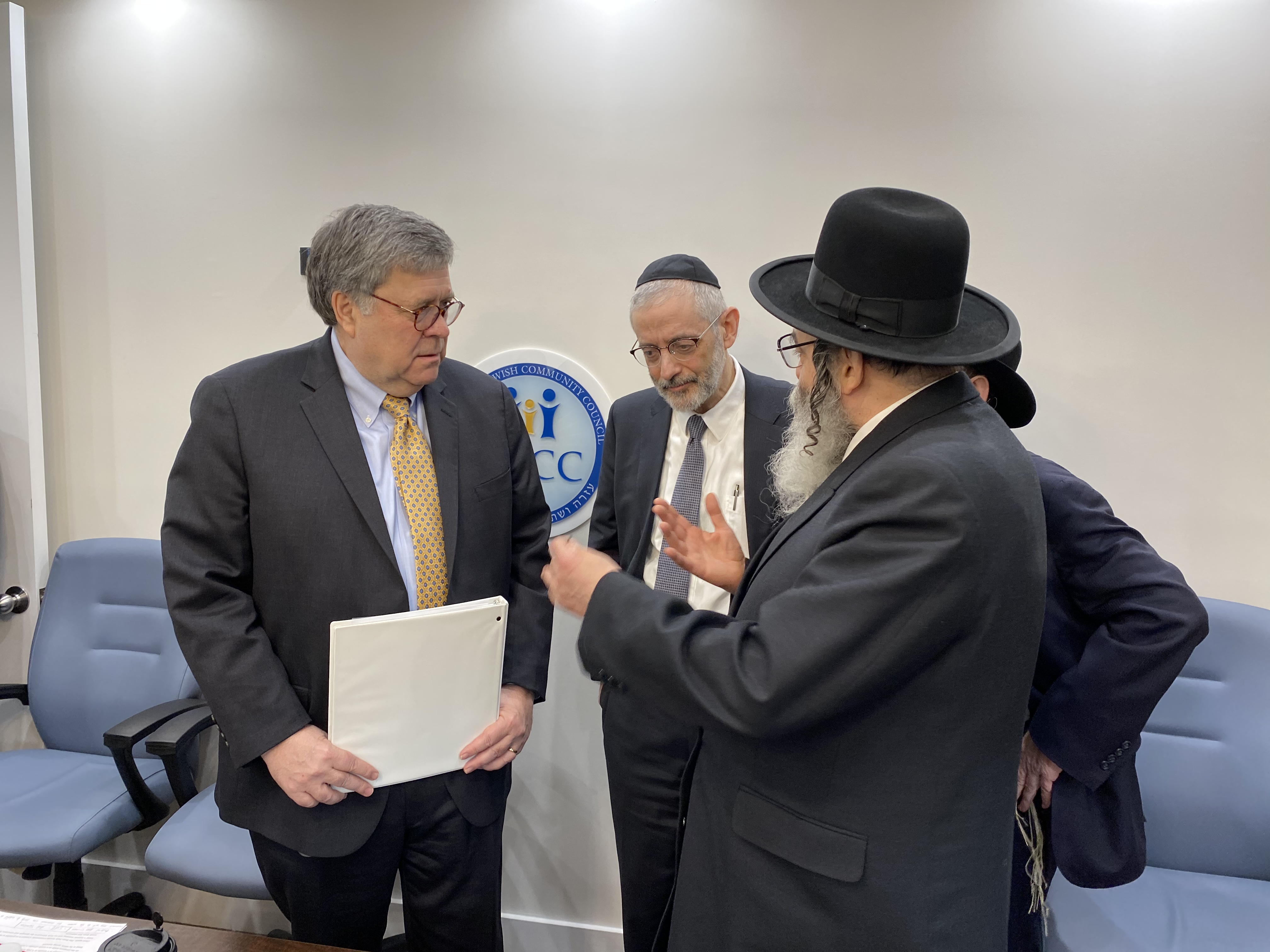 Several attendees voiced concerns that a widening gap between the values of Orthodox Jews and those of social progressives had contributed to a targeting of the community. Some pointed to an ongoing campaign to introduce extensive regulations governing yeshivos and other private schools in New York State as contributing to this phenomenon and identified the efforts themselves as an assault, albeit non-violent, on the community’s core values.

The point was one that seemed to resonate with Attorney General Barr, himself a devout Catholic. He said that he was “worried about pressures on religious education,” and that the end result could be efforts to punish institutions espousing traditional “Judeo-Christian values,” and pledged to investigate the issue of efforts to regulate the state’s private schools.

Each attendee expressed deep appreciation to the Attorney General for his attention to the threats facing the community and voiced hope that the discussion now initiated would be an ongoing one. It was a point that Attorney General Barr reiterated in his closing remarks.

Muslim Man Interested in Judaism Behaved “Belligerently” in Miami Shul, Does Not Pose a Terror Threat