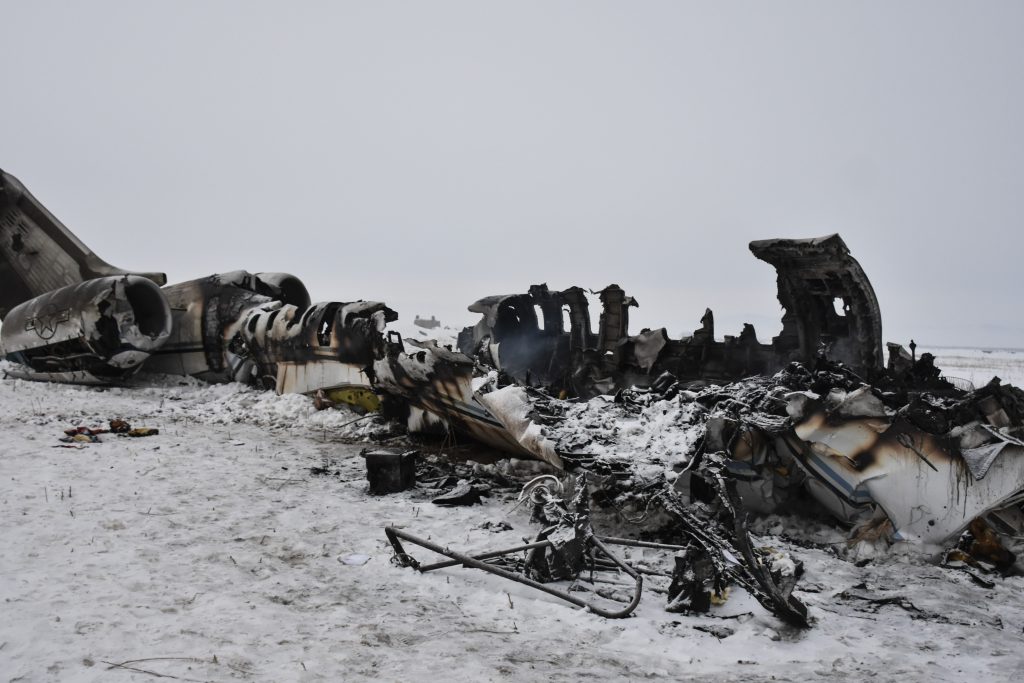 An American military aircraft crashed in eastern Afghanistan on Monday, the U.S. military said, adding that there were no indications so far it’d been brought down by enemy fire.

The spokesman for U.S. forces in Afghanistan, Col. Sonny Leggett, said that the military plane, a Bombardier E-11A, crashed in the Ghazni province and an investigation of its causes was ongoing.

Monday’s plane crash is not expected to derail U.S.-Taliban peace talks if it turns out to have been an accident.

The Bombardier E-11A is a U.S. Air Force electronic surveillance plane. Video from the crash site circulating on social media appeared to show its charred ruins.

A Taliban spokesman and Afghan journalist affiliated with the terrorist group had earlier said the mystery crash was a U.S. military plane.

Tariq Ghazniwal, a journalist in the area, said that he saw the burning aircraft. In an exchange on Twitter, he told The Associated Press that he saw two bodies and the front of the aircraft was badly burned. He added that the aircraft’s body and tail were hardly damaged. His information could not be independently verified.

Ghazniwal said the crash site was about 6.2 miles from a U.S. military base. Local Taliban have been deployed to protect the crash site, he said, and several other terrorists were combing the nearby village for two people they suspect may have survived the crash.

The Taliban hold much of Ghazni province and have total control over the local area of the crash.

Ghazniwal said the site was near a village called Sado Khelo, in the Deh Yak district. He also said the crash occurred soon after 1 p.m. local time, but residents in the area did not report a loud crashing noise. He couldn’t say whether the aircraft had been shot down, but “the crash was not loud.”

The so-called Battlefield Airborne Communications Node can be carried on unmanned or crewed aircraft like the E-11A. It is used by the military to extend the range of radio signals and can be used to convert the output of one device to another, such as connecting a radio to a telephone.

Colloquially referred to by the U.S. military as “Wi-Fi in the sky,” the BACN system is used in areas where communications are otherwise difficult, elevating signals above obstacles like mountains. The system is in regular use in Afghanistan.

The U.S. and Taliban are negotiating a reduction in hostilities or a ceasefire to allow a peace agreement to be signed that could bring home an estimated 13,000 American troops and open the way to a broader post-war deal for Afghans. The Taliban currently control or hold sway over around half the country.

The conflicting accounts could not immediately be reconciled.

Arif Noori, spokesman for the provincial governor, said the plane went down around 1:10 p.m. local time (8:40 a.m. GMT) in Deh Yak district, some 80 miles southwest of the capital Kabul. He said the crash site is in territory controlled by the Taliban. Two provincial council members also confirmed the crash.

But the acting director for Ariana Airlines, Mirwais Mirzakwal, dismissed reports that one the company’s aircraft had crashed. The state-owned airline also released a statement on its website saying all its aircraft were operational and safe.

The mountainous Ghazni province sits in the foothills of the Hindu Kush mountains and is bitterly cold in winter.