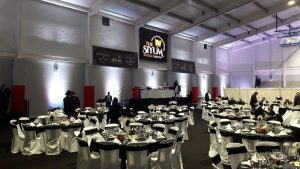 Last Wednesday, the Gibraltar community celebrated the 13th Daf Yomi siyum. The highlight of the siyum was the presence of the Rishon LeTzion Harav Yitzchak Yosef, author of the Yalkut Yosef and son of Hagaon Harav Ovadia Yosef, zt”l. Harav Yosef spoke about how the learning of Daf Yomi connects all Jews regardless of whether they are Sephardi, Ashkenazi, chareidi, dati or of different political beliefs.

Harav Yosef also recounted a time when he met the Russian President, Vladimir Putin, who asked him how is it that all of the ancient civilizations such as the Greeks and Romans are gone, but the Jewish people are thriving. The Rav answered him by quoting Rav Saadiah Gaon, who said that the Jews are a nation only by merit of us having the Torah. The Torah is our life force, constantly breathing into us a renewed energy and making us grow.

The Rav also praised the ladies of the community, saying that much of the success of the Daf Yomi learners is as a result of their encouragement in pushing their husbands and children to learn even at the expense of assistance in running the home.

Besides attending the siyum, the Rishon LeTzion spent time visiting four local shuls, the Talmud Torah, and the old Jewish cemetery, and spoke to the boys and girls of the two Jewish secondary schools.

In Maseches Brachos, Rabi Yehuda says that upon seeing the Yam Hagadol, one recites, “She’asah es HaYam Hagadol.” There is a machlokes among the Poskim whether this refers to the Mediterranean or the Atlantic Ocean. Harav Yosef was excited to recite the brachah from Gibraltar, where one can see both simultaneously, and consequently say the brachah with the Shem and Malchus.

During his time in Gibraltar, the Rishon LeTzion met with the Chief Minister, Fabian Picardo, and with the Acting Governor, Lieutenant General Edward Davis.

Both the Daf Yomi Siyum and the fact that the small Gibraltar community merited to host such a great Talmid Chochom in our midst left an indelible impression on the community – the Daf Yomi shiurim are bursting to the seems and the beis Hamedrash is now packed daily before Shachris. 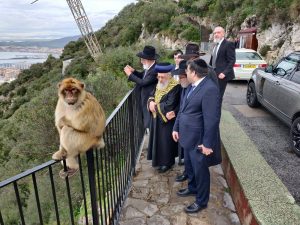