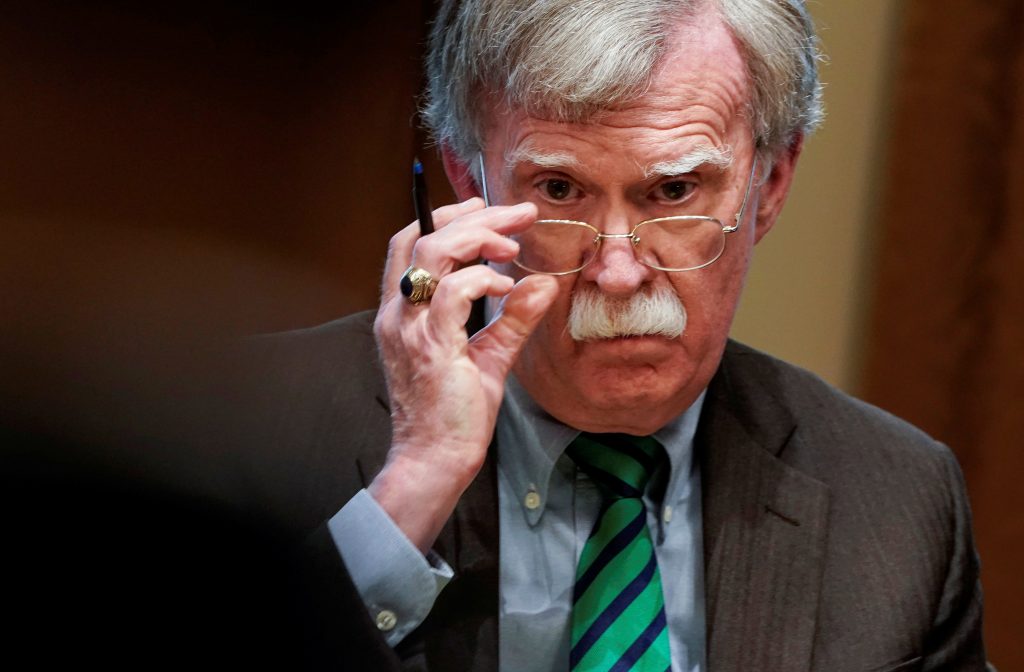 President Donald Trump’s fellow Republicans in the U.S. Senate came under fresh pressure on Monday to allow witnesses and new documents in his impeachment trial, while Trump’s defense team argued that policy differences were a crucial reason that Democrats have sought to remove him from office.

A New York Times report that former national security adviser John Bolton has written in an unpublished book manuscript that Trump told him he wanted to freeze security aid to Ukraine until Kiev helped with politically beneficial investigations prompted fresh calls by Democrats for Bolton and other witnesses to testify at the trial.

Republican Senator Mitt Romney, a sometime critic of Trump, said there was a growing likelihood that at least four Republican senators would vote to call for Bolton to testify, which would give Democrats the votes necessary to summon the former national security adviser.

Senate Republicans so far have refused to allow any witnesses or new evidence in the trial that will determine whether Trump is removed from office. Trump’s legal team on Monday resumed its presentation of opening arguments in the trial, including remarks by Ken Starr, the former independent counsel whose investigation paved the way for the impeachment of former President Bill Clinton, a Democrat, in 1998.

The New York Times cited the manuscript by Bolton as saying that Trump told him he wanted to freeze $391 million in security aid to Ukraine until it helped with investigations into Democrats, including former Vice President Joe Biden and his son, Hunter Biden.

Bolton left his post in September. Trump said he fired him. Bolton said he quit.

If confirmed, the report would add weight to Democrats’ accusations that Trump used the aid – approved by the U.S. Congress to help Ukraine combat Russia-backed separatists – as leverage to get a foreign country to help him dig up dirt on a domestic political rival.

Biden is a leading contender for the Democratic nomination to face Trump in the Nov. 3 presidential election.

Trump on Monday denied telling Bolton that he sought to use the aid to pressure Ukrainian President Volodomyr Zelenskiy to investigate the Bidens on unsubstantiated corruption allegations. Hunter Biden worked for a Ukrainian energy firm while his father was U.S. vice president.

“I think it’s increasingly likely that other Republicans will join those of us who think we should hear from John Bolton,” Romney told reporters.

Another moderate Republican senator, Susan Collins, said the reports regarding Bolton’s book “strengthen the case for witnesses.” Senate Judiciary Committee Chairman Lindsey Graham, a Republican ally of Trump, said he would support issuing a subpoena to obtain Bolton’s manuscript to see if it should be added to the record, a CNN reporter said on Twitter.

Trump denied telling Bolton he was seeking something in return for unfreezing the Ukrainian aid, which eventually was provided in September after the controversy became public.

“I haven’t seen the manuscript, but I can tell you nothing was ever said to John Bolton,” Trump told reporters outside the White House.

In its second day of its opening arguments, Trump’s defense team said a crucial reason that House Democrats impeached Trump was not due to misconduct by the president but because of deep political differences.

“We live in a constitutional republic where you have deep policy concerns and deep differences. That should not be the basis of an impeachment,” Jay Sekulow, one of Trump’s lawyers, told the senators.

“It is our position, as the president’s counsel, that the president was at all times acting under his constitutional authority, under his legal authority, international interest, and pursuant to his oath of office. Asking a foreign leader to get to the bottom of issues of corruption is not a violation of an oath,” Sekulow added.

The issue of whether to call witnesses might be resolved in a Senate vote on Friday or Saturday. Democrats said the Bolton report made it all the more pressing for the Senate to call Bolton as a witness in what is only the third presidential impeachment trial in U.S. history.

“It completely blasts another hole in the president’s defense,” said Representative Adam Schiff, the head of the House Democratic team of “managers” who are presenting the prosecution case against Trump, told CNN.

Many Republicans want a speedy trial without witnesses or any evidence beyond the material amassed in the House impeachment inquiry. But Republican senators and staff spent Monday morning getting up to speed on how the witness process would work, according to a senior Republican aide, in case the trial goes in that direction.

The White House directed current and former administration officials not to provide testimony or documents in the House inquiry, leading the House also to charge him with obstruction of Congress as well as abusing his office.

Starr, a former federal judge and Justice Department official, said there were ways short of impeachment for the House to force an administration to comply with its oversight obligations.

“Go to court. It really is as simple as that, I don’t need to belabor the point,” Starr said.

“The Senate is being called to sit as the high court of impeachment all too frequently,” Starr said. “How did we get here with presidential impeachment invoked in its inherently destabilizing and acrimonious way?”

According to the Times, Trump was pressed for weeks by senior aides including Bolton and Secretary of State Mike Pompeo to release the aid.

But in an August 2019 discussion with Bolton, Trump said he preferred sending no aid to Ukraine until officials there turned over all materials they had about the investigation that involved Biden, as well as Hillary Clinton backers in Ukraine, according to the Times.

If senators do not allow new witnesses and evidence, the Senate could vote as soon as the end of this week on whether to remove Trump.