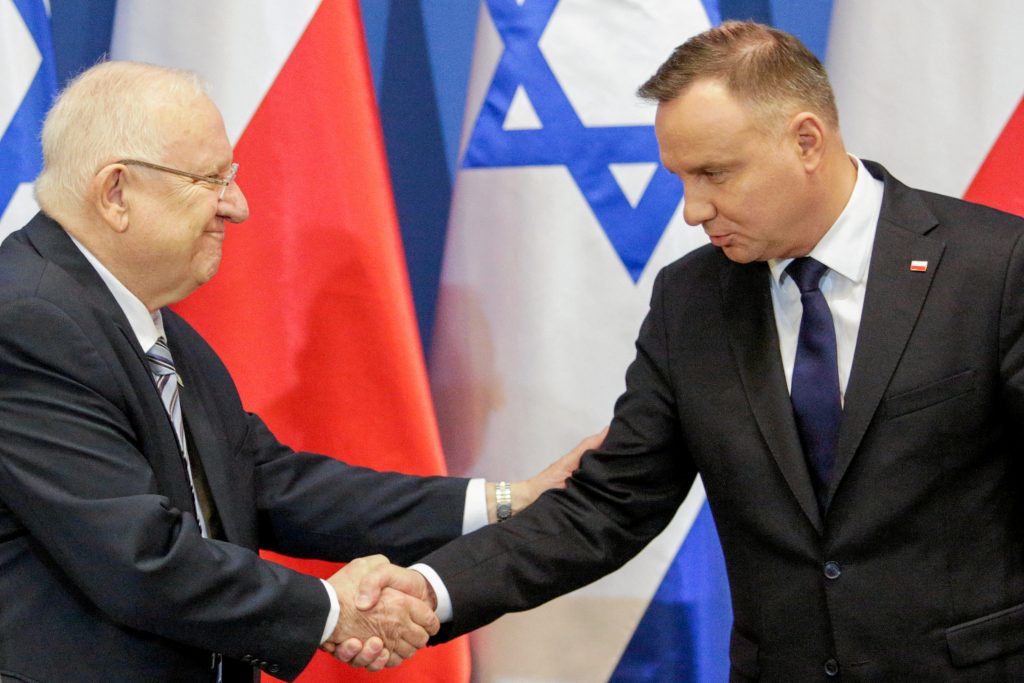 The presidents of Israel and Poland called on Monday for greater global efforts to combat anti-Semitism as the world marked 75 years since the liberation of the Auschwitz death camp amid concerns over a resurgence of anti-Jewish prejudice.

More than 1.1 million people, most of them Jews, Hy”d, were killed in the camp’s gas chambers or died from starvation, cold and disease.

“Today we hear voices which spread hate, on the internet, on the street and in the centers of political power… Our duty is to fight anti-Semitism, racism and fascist nostalgia, those sick evils that… threaten to eat away at the foundations of our democracies,” Israeli President Reuven Rivlin told a news conference at a venue near the camp, which is now a museum.

“This presence is a sign of remembrance, it is a visible sign of opposition to inhuman treatment, hatred, against all forms of hate, especially racist hate,” Duda told the same news conference.

Set up by Nazi Germany in occupied Poland in 1940, at first to house Polish political prisoners, Auschwitz became the largest of the extermination centers where Adolf Hitler’s plan to kill all Jews – the “Final Solution” – was put into practice.

Studies show that despite the experiences of those who suffered and died in the Holocaust anti-Semitic attitudes still persist.

A 2019 survey by the U.S.-based Anti-Defamation League showed that about one in four Europeans harbor “pernicious and pervasive” attitudes towards Jews, compared with 19% of North Americans.

In Germany, 42% agreed that “Jews still talk too much about what happened to them in the Holocaust,” it said. Two people were killed in a shooting near a synagogue in eastern Germany in October, in what officials called an anti-Semitic attack.

German President Frank-Walter Steinmeier and Israel’s Rivlin are among more than a dozen heads of state who will take part in ceremonies on Monday at the “Gate of Death,”where rail tracks led trains packed with victims into the camp.

The commemorations take place as Poland seeks to highlight its own suffering during World War Two, in which six million Poles, including three million Polish Jews, were killed and Warsaw was razed to the ground.

For many non-Jewish Poles, Auschwitz remains the place where the Nazis jailed and killed Polish resistance fighters, the intelligentsia, Roman Catholic priests and innocent civilians.

Critics say the nationalist Law and Justice (PiS) government is not doing enough to counter anti-Semitism and is instead focusing on what it sees as Polish heroism during the war and downplaying Jews’ claims to postwar restitution of property seized from them.

PiS says the West fails to grasp the extent of Poland’s pain and bravery.