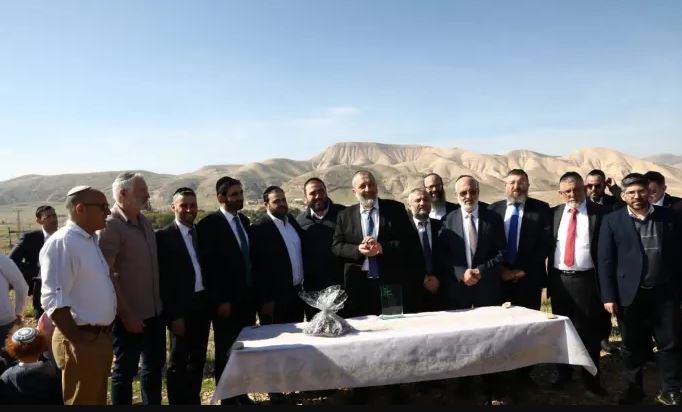 The Interior Ministry is working on solutions for issues that will arise in the event that Israel annexes areas of Yehudah and Shomron, Interior Minister Rabbi Aryeh Deri said Monday. On a tour of the Jordan Valley – the first time since 1994 that a member of Shas has officially toured the region, Channel 13 reported – Deri said that declaring sovereignty over areas like the Jordan Valley “is a mitzvah that has come to our hands, and we are not allowed to miss the opportunity to miss doing a mitzvah.”

On the tour, Rabbi Deri met with local officials and visited farms and some of the small communities that dot the area, as well as conferring with IDF officials. “Our forefathers were here, this marks the spot where the Jews entered Eretz Yisrael, and this is where the great return by our people to their land began,” Rabbi Deri said. “This is our land and the land of our forefathers. We have already begun working on installing Israeli law here. The mayors here will be mayors not by order of the military government, but by the jurisdiction of the Interior Ministry.

Israeli diplomats who have been involved in discussions regarding the plan say that Israel is not going to be required to make many more concessions than it has already made. Channel 12 said that the plan includes recognition of Yerushalayim as Israel’s capital, and gives the option for Israeli sovereignty on all the settlement blocs, at the very least. The plan does not call for the establishment of a Palestinian state at this time, but reserves the option for one to be established in the future – if the Palestinians accept the conditions of the plan, which almost undoubtedly will include recognizing Israel as a Jewish state, something the Palestinian Authority has refused to do until now.

Details on President Donald Trump’s “deal of the century” peace plan are expected to be released Monday. Both Binyamin Netanyahu and Benny Gantz will meet with Trump Monday afternoon Israel time, with the prime minister conferring with the president before the Blue and White head. Afterwards, details of the plan will be released. Netanyahu will again meet with Trump Tuesday at noon, Washington time.