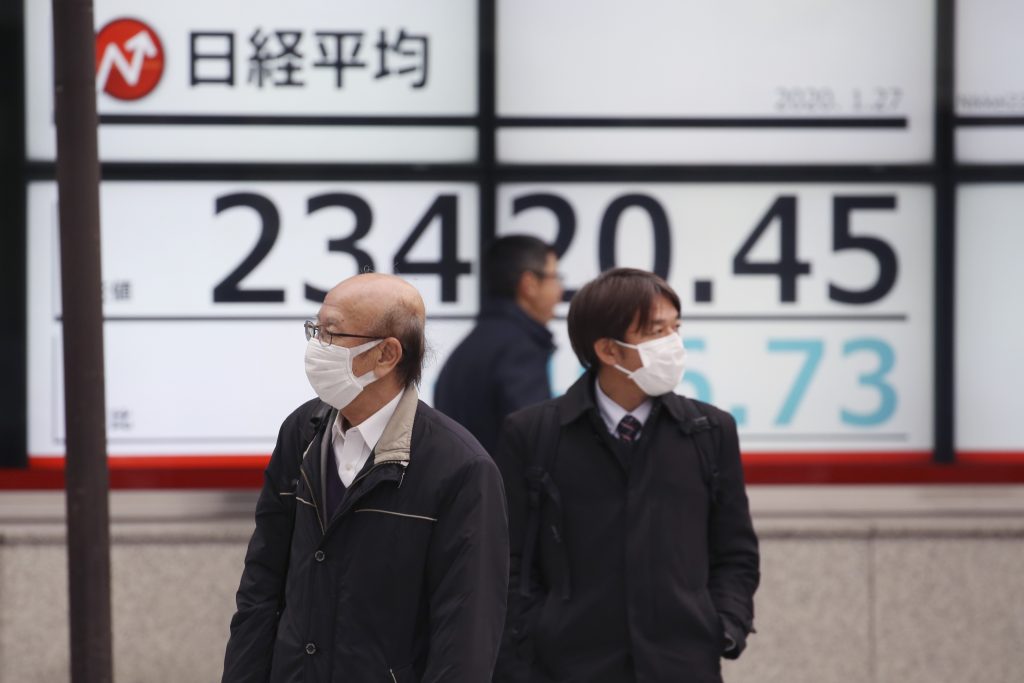 Shares tumbled Monday in the few Asian markets open as China announced sharp increases in the number of people affected in an outbreak of a potentially deadly virus.

China announced it was extending its week-long public holiday by an extra three days as a precaution against having the virus spread still further. By midnight Sunday, the National Health Commission said 80 people had died out of 2,744 cases that were confirmed.

Various governments have announced plans to evacuate people from Wuhan, the central Chinese city at the center of the pandemic. China halted outbound tours and Wuhan and some other cities stopped public transport, obliging tens of millions of people to stay where they are at the time of the country’s peak travel season.

The virus can cause pneumonia and other severe respiratory symptoms. The World Health Organization has so far held off on declaring the situation a global emergency, which would bring more money and resources to fight it, but could trigger economically damaging restrictions on trade and travel.

“Traders who would be typically discussing the weekend football results are now sadly focusing on mortality scores this morning,” Stephen Innes of AxiCorp said in a commentary.

Apart from the direct impact on tourism and travel, “any economic shock to China’s colossal industrial and consumption engines will spread rapidly to other countries through the increased trade and financial linkages associated with globalization,” he said.

In other developments in Asia, the Indian government said it plans to sell its entire stake in the national carrier Air India to shore up falling revenues and privatize the airline.

A government document issued Monday invited initial expressions of interest in the airline, after an initial attempt to sell the carrier last year failed to attract a single bidder. Air India operates both domestic and international routes, has a debt burden of more than 580 billion rupees ($8 billion) and has been operating at a loss for years.

On Friday, the S&P 500 had its worst day since early October, dropping 0.9% as health care stocks saw steep losses. The sell-off followed news that a Chicago woman had become the second U.S. patient diagnosed with the new virus from China.

Airlines and several other companies in the travel and tourism industries fared poorly amid worries about the potential economic impact of the virus. United Airlines fell 5% and American Airlines dropped 5.6%. Cruise line operator Carnival fell 4.4%.

Investors have been shifting money into safe-play, high-dividend stocks and U.S. government bonds.The surge in bond-buying has sent yields lower. The yield on the 10-year Treasury note fell to 1.67% from 1.74% late Thursday, a big move.

Investors also are digging through the latest batch of company earnings reports, including strong results from chipmaker Intel and American Express. Next week is shaping up as the busiest week for earnings reports, with roughly 40% of the companies in the S&P 500 due to issue their results for the last three months of 2019.