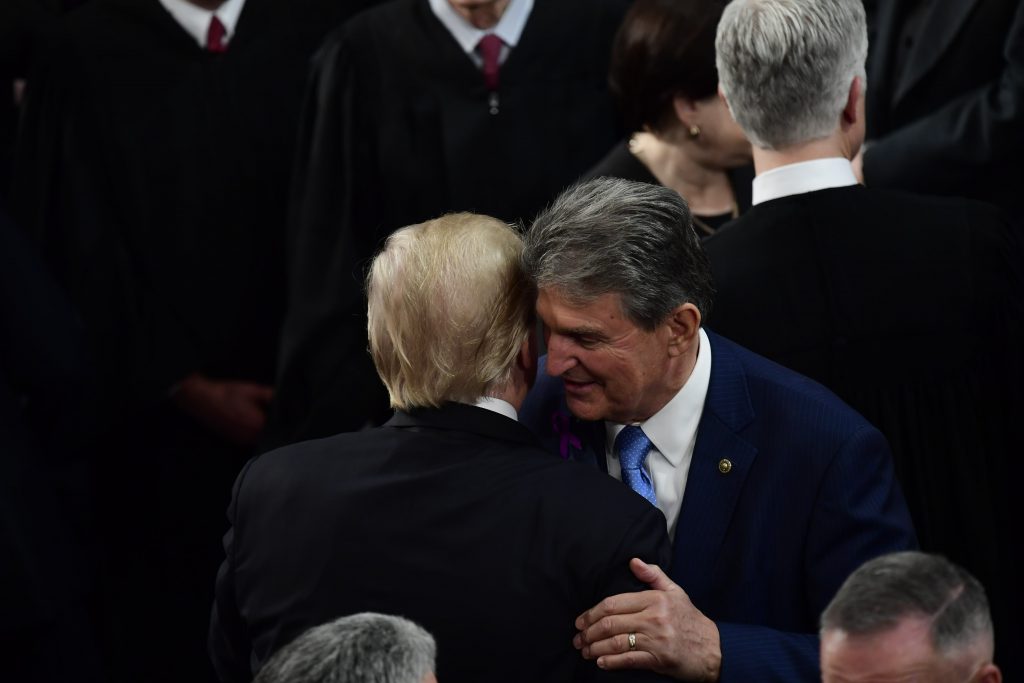 President Donald Trump and White House officials are looking for at least one Senate Democrat to vote against removing the president from office at the end of his impeachment trial, and they see Joe Manchin III, W.Va., as the most likely candidate.

Trump took particular pride that three House Democrats voted against his impeachment, White House officials said, and he would like to be able to get at least one Senate Democrat to vote for his acquittal so he can claim the decision was bipartisan.

Manchin has sided with Trump on tough votes before, such as the confirmation of Supreme Court Brett Kavanaugh. But voting to acquit the president would be an even more politically charged decision, one that could help him maintain his reputation as a moderate back home but would probably make him a pariah within his own party.

The West Virginian struck a conciliatory note toward the president Saturday, becoming the only Democrat to publicly praise Trump’s defense team even as he called for more witnesses, such as former national security adviser John Bolton and acting White House chief of staff Mick Mulvaney.

“I thought they did a good job in presenting the defense for the president,” he said. “The most important thing I took away from today was, they made very clear that there’s not one witness that we’ve heard from . . . that had direct contact with the president. That reaffirms why I have said we should have witnesses.”

Manchin, 72, isn’t the only moderate Democrat who White House aides said they believe could vote to acquit the president. Sens. Kyrsten Sinema of Arizona and Doug Jones of Alabama are also considered possibilities because they represent states Trump won in 2016.

But Manchin is the only one they believe could be swayed not only by politics back home but also by his relationship with the president, according to aides who, like others, spoke on the condition of anonymity to discuss issues involving the impeachment trial.

Trump has interacted with Manchin – a brawny, backslapping former governor – more than any Democrat in the Senate. Manchin has come over for screenings, and the president has given him tours of the family residence and his private study.

“I’m not going to have the kind of relationship with him that Democrats have,” Manchin said in an interview last month.

A White House official noted that Trump has done several favors for Manchin – including giving two basketball players, Jerry West and Bob Cousy, the Medal of Freedom – at the senator’s urging.

Trump agreed to take pictures with Manchin that were used in the senator’s 2018 campaign, and the president has called him out of the blue just to talk politics while repeatedly asking him to become a Republican. People close to the president said he has more affection for Manchin than any other Senate Democrat, and that he understands the transactional nature of the relationship.

Trump recently made a show of his support for a bill he signed into law last year that was championed by Manchin concerning pension and health care benefits for coal miners.

“We will get this done for our great Miners!” Trump wrote on Jan. 10 in a quote-tweet of Manchin’s month-old tweet promoting the deal over the legislation.

Trump has not directly lobbied Manchin on impeachment since the trial started, counting on their past relationship and political pressure back home to weigh on the West Virginian. But people close to the senator and the president said they believe Trump may reach out before the trial is done.

The last time the two spoke was in December, when Trump signed the coal miner provisions into law as part of a bigger legislative package. But Manchin met at the White House this month ahead of the Senate trial with senior aides, including legislative affairs director Eric Ueland, who is taking a central role in the impeachment fight. A White House spokesman did not respond to a request for comment.

Senate Democrats are warily eyeing Manchin, nervous about how he will vote. A senior Democratic aide said Senate Minority Leader Charles Schumer, D-N.Y., was pleased that Manchin has pushed for new documents from the administration and for witnesses to appear before the Senate, even in local media, but they have received no assurances on how he will vote.

“Every member is making up their own mind,” Schumer said in a statement to The Washington Post. “They know how I feel.”

Manchin has also been critical of how Senate Majority Leader Mitch McConnell, R-Ky., handled the run-up to the trial, but he has declined to criticize the president, saying he wants to weight the evidence against him.

Manchin said that “if the facts are totally indisputable,” he would vote to convict. “I’m taking this extremely seriously.”

People who have spoken with the senator said he believes the president behaved improperly but has not decided whether it is an impeachable defense – and is concerned about what precedent it might set to remove Trump from office.

He is also aware of how the issue is playing back home, even if he does not plan to run for reelection in 2024.

A recent poll commissioned by Club for Growth, a conservative group, shows 69 percent of 500 West Virginia voters surveyed oppose impeaching the president. That is consistent with other public polling in the state, where Trump won by 42 percent over Hillary Clinton.

“The voters are signaling to Joe, ‘We like you, but we don’t want you go to against our guy,’ ” said David McIntosh, the leader of Club for Growth. “In West Virginia, they have a deep loyalty to Manchin, but a lot of those same voters are really strong Trump supporters.”

When the two men had lunch just after the 2018 midterm election at the White House, Trump turned to Ivanka Trump and Vice President Mike Pence, smiled and said: “I told you we couldn’t beat him.”

“Well, … it wasn’t for a lack of trying,” Manchin said he responded, mentioning that Trump visited West Virginia multiple times.

The president then laughed and said, “Oh, Joe, you know I like you,” according to Manchin. The senator said he shrugged it off and they had lunch for almost two hours.

“We understand what game we’re in,” he said. “It’s a tough business.”

Manchin has voted with the president more than 53 percent of the time, according to the website FiveThirtyEight – more than any other current Democratic senator.

Manchin said he repeatedly told the president that his base is largely unshakable. “Trust me, Mr. President, I tried to shake your base and I couldn’t do it,” he said he told Trump.

“We have a good relationship because we connect,” he said.