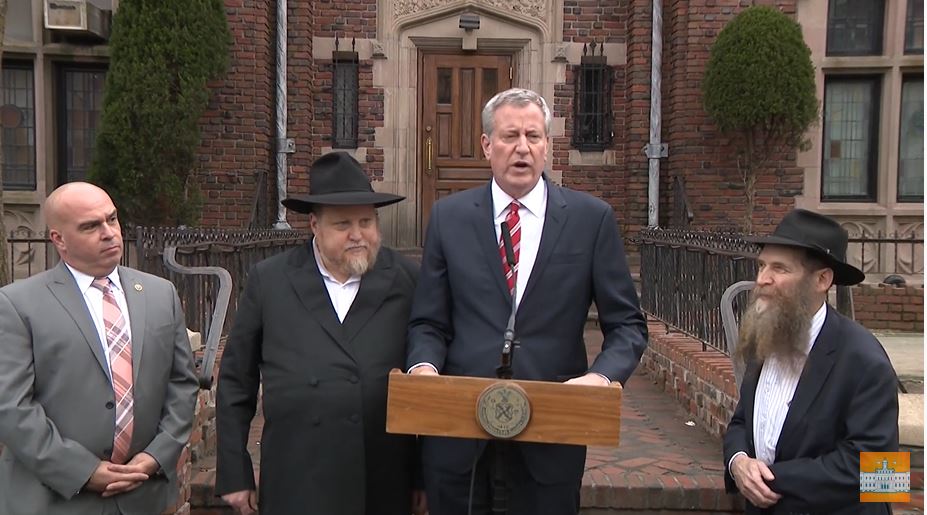 Mayor Bill de Blasio announced the formation of three Neighborhood Safety Coalitions (NSCs) in Brooklyn neighborhoods that have experienced recent disturbing incidents against Jewish community members. The City plans to provide $200,000 to each of the three neighborhoods to help provide day-to-day support for the coalitions’ initiatives.

“Hate has no place in our communities, and in New York City, we watch out for our neighbors,” said Mayor Bill de Blasio. “Our new Neighborhood Safety Coalitions will help communities address the root causes of hate and deter acts of violence before they occur.”

The Coalitions, made up of a diverse cross-section of each neighborhood, bring together leaders from more than 70 community institutions to create a visible network of ambassadors for neighborhood safety and unity, mobilize community response, and promote cultural understanding.

They will meet approximately once a month, and will be operating out of the Williamsburg, Crown Heights, and Borough Park neighborhoods. Their task is to generate concrete strategies to address root causes of hate crimes, mobilize residents in response to incidents, and promote cultural understanding among community groups that leads to opportunities for positive social interaction.

The Mayor’s Office for the Prevention of Hate Crimes will work with the individual coalitions to identify the unique needs within each neighborhood, and will both scale existing efforts as well as develop innovative, long-term strategies that promote respect and break down stereotypes.

“The battle against hate crimes is multi-faceted, necessitating an “all hands on deck approach”. The first hands to come together need to be all segments of the local community where these attacks are happening. Their reach is deep in the community and they are the ones who have the most vested in keeping their homes and community peaceful and safe. The NSC coupled with all levels of government dedicating the appropriate resources will enable us to stabilize the crisis of hate crimes that keeps sinking into our streets. We are grateful to the Mayor for his stewardship of the NSC and the city’s response to anti-Semitic hate crimes,” said Rabbi David Niederman, President of the United Jewish Organizations of Williamsburg and North Brooklyn.

“I thank Mayor de Blasio for creating the Neighborhood Safety Coalition and seeking ways to combat and eradicate hate from our neighborhoods,” said Avi Greenstein, CEO of the Boro Park Jewish Community Council. “I look forward to being a partner with the Mayor’s new Prevention of Hate Crimes office in leading the efforts to work towards the safety of the Boro Park community as an integral part of this vital coalition.”

“We were honored that the Mayor built on the work that has been done in crown heights as a model for the rest of the City,” said Rabbi Eli Cohen, Executive Director of the Crown Heights Jewish Community Council.