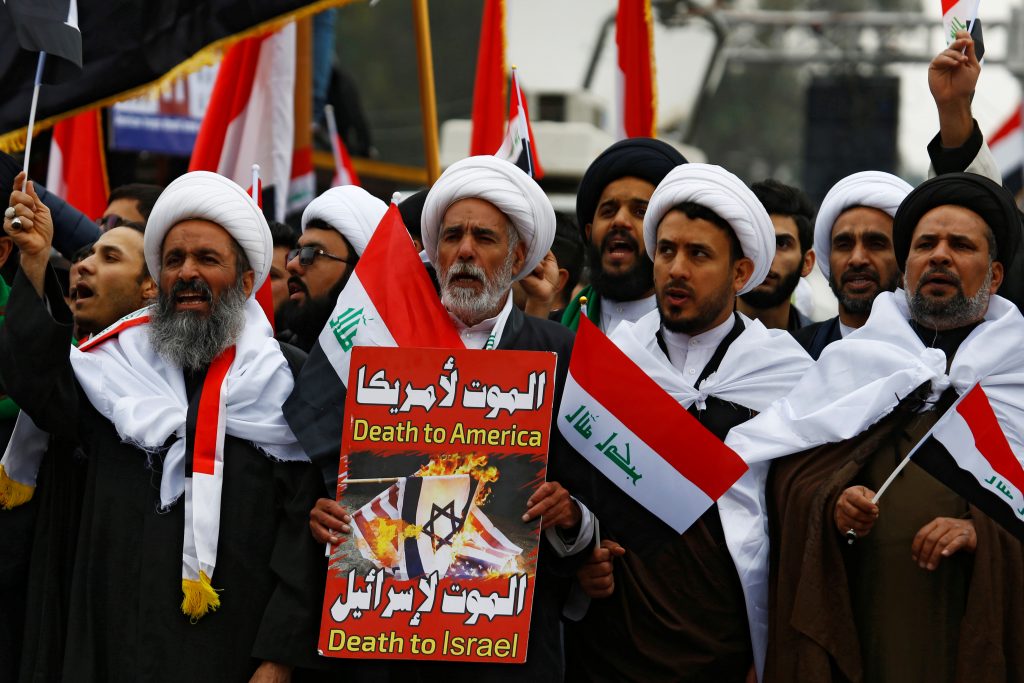 Thousands of supporters of an influential, radical Shiite cleric gathered Friday in central Baghdad for a rally to demand that American troops leave the country amid heightened anti-U.S. sentiment after a drone strike ordered by Washington earlier this month killed a top Iranian general in the Iraqi capital.

Since mid-morning on the Muslim day of prayers, loudspeakers blasted “No, no America!” at a central square in the Iraqi capital. A child held up a poster reading, “Death to America. Death to Israel.”

Roads and bridges leading to the heavily fortified Green Zone, the seat of Iraq’s government and home to several foreign embassies, including the U.S. Embassy, were blocked off by concrete barriers. Iraqi security forces stood guard, blocking access to the gates to the zone.

There was a heavy security presence as the protesters, mostly hailing from the capital but also Iraq’s southern provinces, walked on foot to an assembly point in Baghdad’s Jadriya neighborhood, waving Iraqi flags and wearing symbolic white shrouds.

Shiite cleric Moqtada al-Sadr, whose party won the most number of seats in the May 2018 parliament elections, had called for a “million-man” demonstration to demand he withdrawal of American troops following the U.S. drone strike near Baghdad’s airport that killed top Iranian general Qassem Soleimani and senior Iraqi militia commander Abu Mahdi al-Muhandis, sparking the ire of Iraqi officials from across the political spectrum.

If the conditions were met, the statement said, “the resistance will temporarily stop until the last soldier leaves Iraq,” al-Sadr said, referring to American troops.

Friday’s rally is supported by mainstream Shiite parties, including that of al-Sadr’s political rival Hadi al-Ameri, who heads the Fatah bloc in parliament, as well as the Popular Mobilization Units, an umbrella group comprised of an array of militias, including Iran-backed groups.

In response to a public outcry over the U.S. airstrike that killed Soleimani and al-Muhandis, Iraq’s parliament passed a non-binding resolution this month, calling on the government to expel foreign troops from the country. Kurdish and most Sunni lawmakers boycotted the vote.

“The American forces should leave,” said an 18-year-old protester, Amer Saad. “I am ready to fight against the Americans if Moqtada al-Sadr asks us.”

Police and militiamen of the Popular Mobilization Units also closed off roads leading to the protest site, in both Karada and Jadriya neighborhoods of Baghdad.

Al-Sadr, once a huge thorn in the side of the American occupation after the 2003 invasion, derives political capital from his ability to call on supporters to clog streets and paralyze all movement in Baghdad.