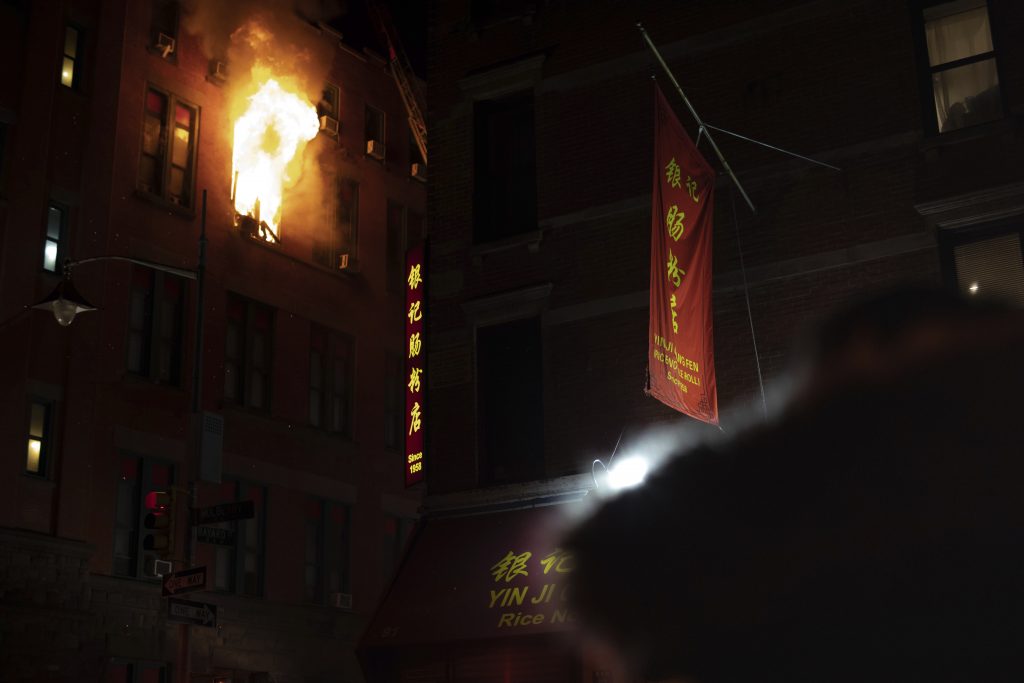 Firefighters toiled all night and were still putting out pockets of fire Friday morning at a building in the heart of Manhattan’s Chinatown.

Nine people were hurt, eight of them firefighters, but none of the injuries was considered life-threatening.

Responders were called around 8:45 p.m. Thursday to Mulberry Street for a fire that started on the fourth floor of the city-owned building and extended to the fifth floor and through the roof.

Videos and photos posted to social media showed flames bursting out of windows and flowing heavily from the roof of the building, which Mayor Bill de Blasio said on Twitter was “a pillar to the Chinatown community.”

Jian Chun told the New York Post that a victim was trapped on the top floor when firefighters arrived.

“They found a guy on the top floor yelling to get out,” the witness said. “They did a great job getting to him. This fire seemed out of control.”

Fire Commissioner Daniel Nigro said firefighters were forced to battle the blaze from the outside.

“The interior became untenable and the units had to be withdrawn,” he said. “It was too dangerous in the building.”

The building near Columbus Park was built in 1900, according to property records.

The fire comes ahead of the Chinese Lunar New Year, which is Saturday.

City Council Member Margaret Chin tweeted that the fire was “devastating” and said it struck a building that houses several community groups.

A third-floor tenant, the nonprofit community organization CMP, had closed early Thursday for the holiday.

The building is also home to the Chen Dance Center and a senior center, and housed documents from the Museum of Chinese in America.

“We will work to make sure vital services aren’t lost,” Chin told WNBC.

“I know the neighborhood is in shock,” de Blasio tweeted. ”We’re going to help the community get through this.”