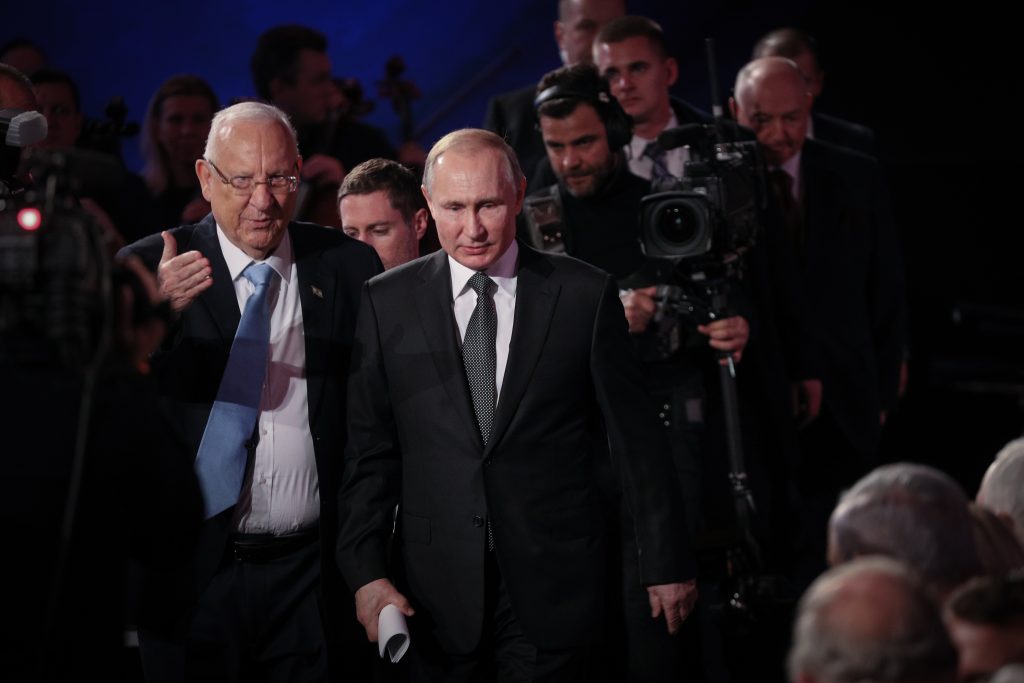 Russian President Vladimir Putin has called for a summit in 2020 of leaders of the five permanent members of the U.N. Security Council to “defend peace” in the face of global instability, the AFP reported.

In a speech at the Fifth Holocaust Forum at Yad Vashem on Thursday, the Russian leader said that “the founder countries of the United Nations, the five states that hold special responsibility to save civilization, can and must be an example,” calling for a meeting “in any place in the world” of the leaders of Russia, China, the United States, France and Britain.

Such a meeting would “play a great role in searching for collective answers to modern challenges and threats,” Putin said.

At the Holocaust forum, he said: “We mourn for all the victims of the Nazis, including six million Jews. These death camps were operated not just by Nazis but by their henchmen in various countries,” a veiled reference to the role of Poles in the death camps set up by the Germans on their soil.

“We need to find the courage not just to speak about anti-Semitism but also to do everything in our power to protect Jews,” he said.

Later on Thursday, Putin was accompanied by Israeli Prime Minister Binyamin Netanyahu‏‏ at the dedication ceremony of a monument in memory of the heroism of the soldiers and civilians who were killed during the siege of Leningrad in World War II.

An estimated 600,000 to 1.5 million local residents perished in the 900-day siege of the city, since renamed Saint Petersburg, among them tens of thousands of Jews, many of whom enlisted in the Red Army or joined volunteer militias in the historic defense.

A team of artists from Israel and Russia — architect Udi Kasif, sculptor Adam Peretz, architect Anatoly Wlada Chernov and Ladislav Manchinski — worked together to build the monument. Work on the monument is currently being completed and it has been put in place in Sacher Park in the capital. The monument is 25.5 feet tall, made of copper and cast bronze to represent the flame of a candle. The movement of the flame finds expression in the form of a lit spiral at night to create the special effect of a perpetual flame, according to a statement from the Israel Government Press Office.

Also in attendance were President Reuven Rivlin, Moshe Lion, the mayor of Yerushalayim, the Russian Foreign Minister, the Governor of St. Petersburg, ministers, deputy ministers, ambassadors and hundreds of additional guests who specially came for the ceremony from Russia and other countries. Around 70 veterans and heroes of the siege of Leningrad, who are currently living in Israel, were also invited.