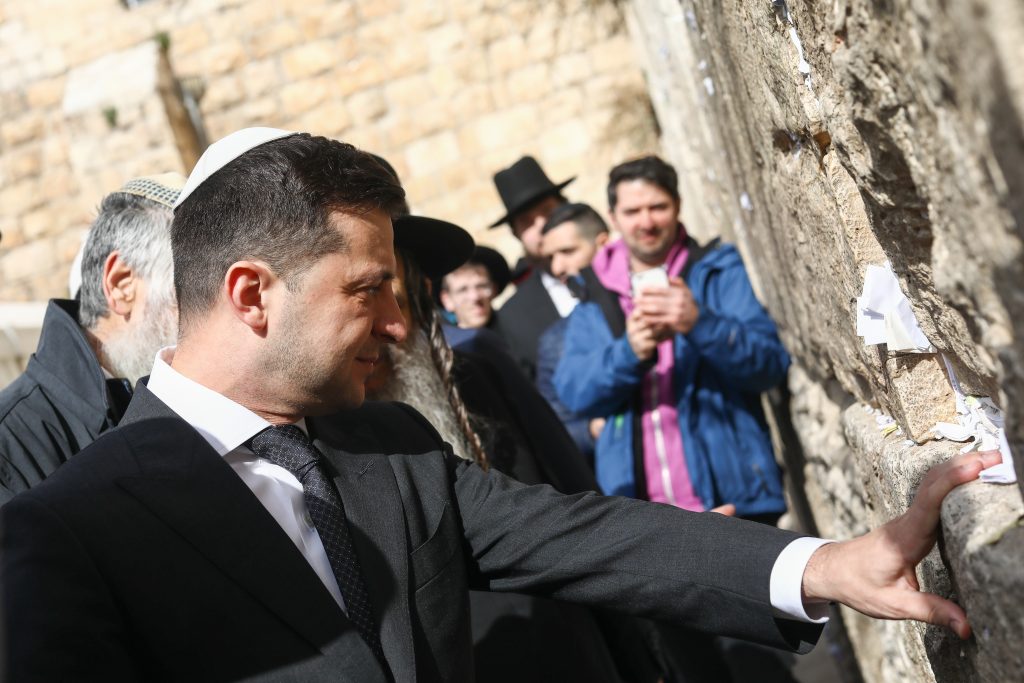 World leaders in Yerushalayim for the Holocaust forum continued on Thursday to visit the Kosel, until recently a rare event until recent times.

U.S. Vice President Mike Pence went there on Thursday with Israeli Prime Minister Binyamin Netanyahu‏‏, ahead of their planned meeting at the U.S. Embassy in the capital.

The area immediately adjacent to the Kosel was partitioned off before their arrival.

Rav of the Kosel Rabbi Shmuel Rabinowitz recited Tehillim as Netanyahu, Pence and Ambassador to Israel David Friedman stood by.

Pence then approached the Kosel by himself and inserted a prayer note in one of the crevices. He then stood, touching the Wall with one hand for a long moment in silence.

Netanyahu followed suit, and then Rabbi Rabinowitz joined them and gave some background about the Kosel for the Vice President.

Pence, maintaining a serious expression throughout, made no statement to the gathered reporters.

Ukrainian President Volodymyr Zelensky, the country’s first Jewish president, also was at the Kosel on Thursday.

Zelensky was accompanied by Rabbi of Ukraine Moshe Hasman and Rabbi Shalom Arush. They said Tehillim together and the president put a note in the Wall.

Since the Trump visit, the stricture about keeping the visits unofficial became obsolete.

“A lot of the inhibitions that might have existed in the past have been dropped. It’s pretty clear to many in the international community that the area of the Wall, if not the whole city, will remain in Israel’s hands in any future peace arrangement,” said Dore Gold, a former Foreign Ministry director-general.

On Wednesday, French President Immanuel Macron went to the Kosel, the first time a French head of state has been there in over 20 years.

Macron on Thursday visited a memorial for the deportation of Jews from France near the city of Beit Shemesh. The memorial, at the Rogleet Forest, is 300 feet long and 39 feet high, containing the convoys of deportations first and last names, and date and place of birth of the deportees, Arutz Sheva reported.

The grove consists of 80,000 pine trees, in memory of the 80,000 Jews who were deported from France to Nazi death and labor camps during the Holocaust.

Macron laid a wreath and met with youth who are descendants of deportees.

On May 22, 2017, Donald Trump became the first sitting U.S. president to visit the Kosel. “Words fail to capture the experience,” he said a few hours later. “It will leave an impression on me forever.”

At the time, Trump was not accompanied by any senior Israeli officials, to maintain it as a “private” visit, not a state visit or a political statement.

The list of foreign dignitaries visiting the Kosel has grown to include U.S. Secretary of State Mike Pompeo (with Netanyahu), Czech Foreign Minister Tomáš Petříček, the president of Liberia, and others.