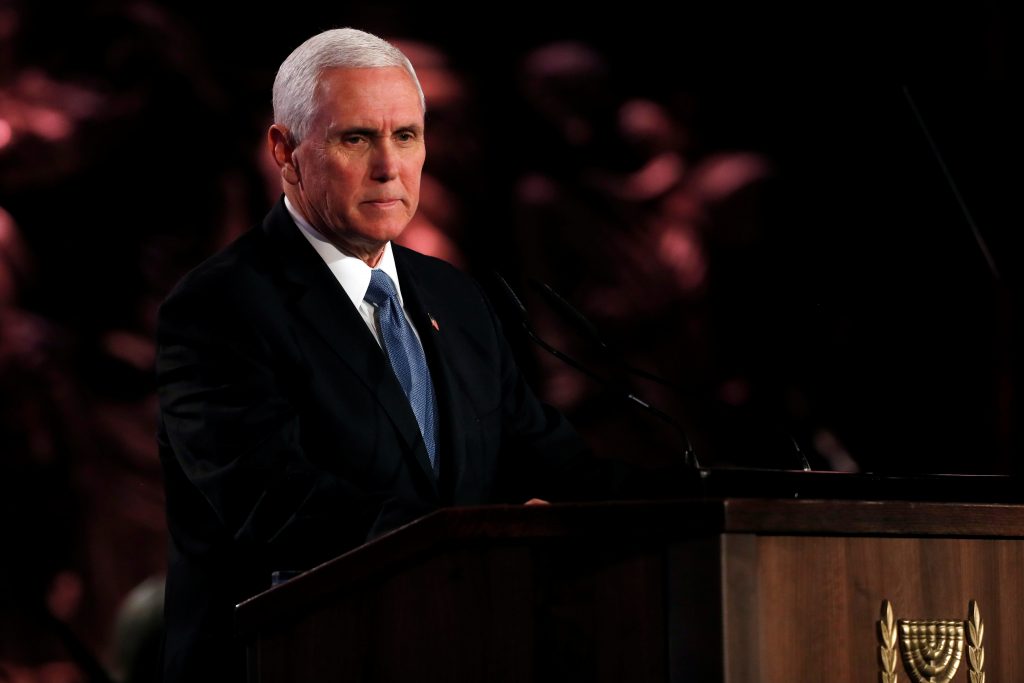 Prime Minister Binyamin Netanyahu denounced Iran on Thursday as “the most anti-Semitic regime on the planet,” telling world leaders at a Holocaust memorial event that Israel would always defend itself against those seeking to destroy it.

Israel has hailed the World Holocaust Forum at the Yad Vashem memorial center, marking the 75th anniversary of the liberation of the Auschwitz death camp during World War Two, as the biggest international gathering in its history.

The conference is being held against the backdrop of a rise in anti-Semitic attacks in the United States and Europe.

“At the core of Israel’s establishment is the command – there will not be another Holocaust. As prime minister of Israel, that is my greatest commitment,” Netanyahu said in his address to world leaders, who included Russian President Vladimir Putin and U.S. Vice President Mike Pence.

Netanyahu then lashed out at his country’s arch-foe Iran, whose nuclear ambitions he says are aimed at building atomic weapons with the aim of destroying Israel.

“I am concerned that we have yet to see a unified and resolute stance against the most anti-Semitic regime on the planet – a regime that openly seeks to develop nuclear weapons and annihilate the one and only Jewish state,” Netanyahu said.

In 2018, Washington abandoned the nuclear deal that Iran signed with world powers in 2015. Under the accord, Tehran agreed to curb its nuclear program in return for a lifting of international sanctions against it.

Netanyahu said his country had learned the lessons of the Holocaust – to take seriously any threats from “those who seek our destruction” and to always have the power of self-defense.

In his comments, Pence also took aim at Iran, saying it was the one country “that denies the Holocaust as a matter of state policy and threatens to wipe Israel off the map.”

A global survey by the U.S.-based Anti-Defamation League in November found that global anti-Semitic attitudes had increased, and significantly so in Eastern and Central Europe. It found that large percentages of people in many European countries think Jews talk too much about the Holocaust.

At a meeting earlier on Thursday with Israel’s President Reuven Rivlin, Russia’s Putin said it was important to oppose xenophobia and anti-Semitism everywhere.

“You just said that it’s not known where anti-Semitism ends,” Putin told Rivlin, referring to remarks the Israeli president made at their meeting. “Unfortunately we do know this – Auschwitz is its end-result.”

More than one million people, most of them Jews, were killed at the Auschwitz-Birkenau camp during World War Two. Overall, some six million Jews died in the Holocaust, Hy”d.

One notable absentee from Thursday’s commemoration was President Andrzej Duda of Poland, where the Auschwitz camp was built by the Nazi German occupiers during the war.

Duda turned down his invitation because Poland was not allowed to speak at the conference, unlike the wartime victors, the United States, Russia, Britain and France, and also Germany.

Polish leaders have also been angered by comments made by Putin last month suggesting Poland shared responsibility for the war. Poland, which was invaded first by Nazi Germany and then by Soviet forces in September 1939, sees itself as a major victim of the war, in which it lost a fifth of its population.

Poland will host its own ceremony at the Auschwitz-Birkenau Memorial and Museum on Jan. 27, as it does every year.