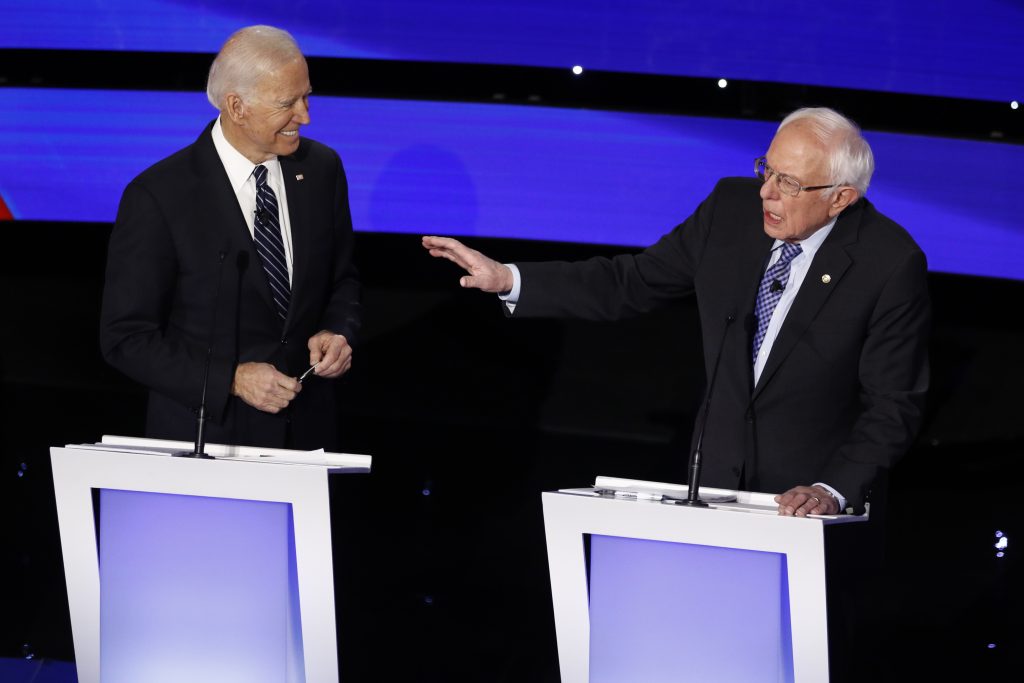 Democratic presidential candidates Joe Biden and Bernie Sanders have overestimated the amount of revenue their tax proposals would generate by hundreds of billions, or even trillions, of dollars, according to a new study.

The former vice president and the senator from Vermont have proposed vastly different tax plans: Biden is calling for rate increases on top earners and corporations, while Sanders wants to raise taxes on wealth, inheritances and financial transactions.

But the discrepancies highlighted by the estimates from the Penn Wharton Budget Model raise questions about the Democratic presidential candidates’ plans to finance new programs and policies to reshape the U.S. economy.

The Penn Wharton Budget Model estimate shows Biden’s plan would raise about $600 billion to $900 billion less than the $3.2 trillion over a decade than his campaign projected.

Sanders is even further off the mark. His proposal to increase the top estate tax rate to 77% and apply the levy to more inheritances would raise an additional $267 billion over a decade. That’s on top of the $249 billion the Congressional Budget Office estimates the tax would raise with no changes. That’s still far short of the $2.2 trillion Sanders’ campaign has estimated, according to the budget model estimates.

Sanders’s wealth tax, which would levy the fortunes of millionaires and billionaires at rates ranging from 1% to 8% annually, comes up at least $1 trillion short. Penn Wharton estimates it would generate $2.8 trillion to $3.3 trillion over 10 years while the Sanders campaign has estimated the tax would raise $4.35 trillion.

There are a lot of reasons for this. Higher taxes motivate people to try to find legal or illegal ways to shield themselves from some or all of a levy. Some taxes can be difficult for the Internal Revenue Service to enforce. Making multiple tax changes at once can cause unexpected interactions. And, most important, candidates are generally using the most favorable estimates they can find for each piece of their proposals, and these blueprints often prove unrealistic.

Senator Elizabeth Warren has run into the same problem. Penn Wharton previously said she is overestimating the proceeds of her wealth tax by at least $1 trillion.

Overly rosy figures are fine for the campaign trail, but they wouldn’t pass muster in Congress, where any plan would be subject to an estimate from the non-partisan congressional Joint Committee on Taxation. That tally would determine how much money Democrats have to work with to implement one of their priorities, such as expanding health care coverage or infrastructure investment.

“To sell the tax to the general public as a third bigger than what it is is misleading,” said Rich Prisinzano, the director of policy analysis for the Penn Wharton Budget Model. “Ultimately I’d rather have information close to the information that Congress will have if they decide to move this through the legislative process.”

Republicans faced a revenue crunch in 2017 when they overhauled the tax code. They passed a budget resolution that would allow their tax cuts to lose $1.5 trillion over a decade, but still had to offset some of the rate reductions by finding new sources of revenue.

Republican leaders had to dig through metaphorical couch cushions and symbolically raid their children’s piggy banks to find the tax revenue they needed to pay for their plan.

The overhaul ended up with lots of small tax increases that many people didn’t know about until months afterward, such as taxes on parking benefits for employees at churches and nonprofits, and the death benefits for military widows.

A 2019 year-end spending bill ultimately undid those changes after political pressure mounted, but the result demonstrates that Republicans had to take the risk of angering key constituencies — churchgoers and military families — to find enough revenue to pay for their tax cuts.

Democrats would face a similar challenge, if they were to sweep Congress and the White House. They’re keen to raise taxes on the wealthy and corporations — and their plans largely do that. Biden’s, for example, would raise taxes for those in the top 0.1% by an average of of more than $1 million.

But to fill the gaps between their estimates and what congressional scorekeepers project, lawmakers may have to look to other, potentially less popular, sources of revenue.