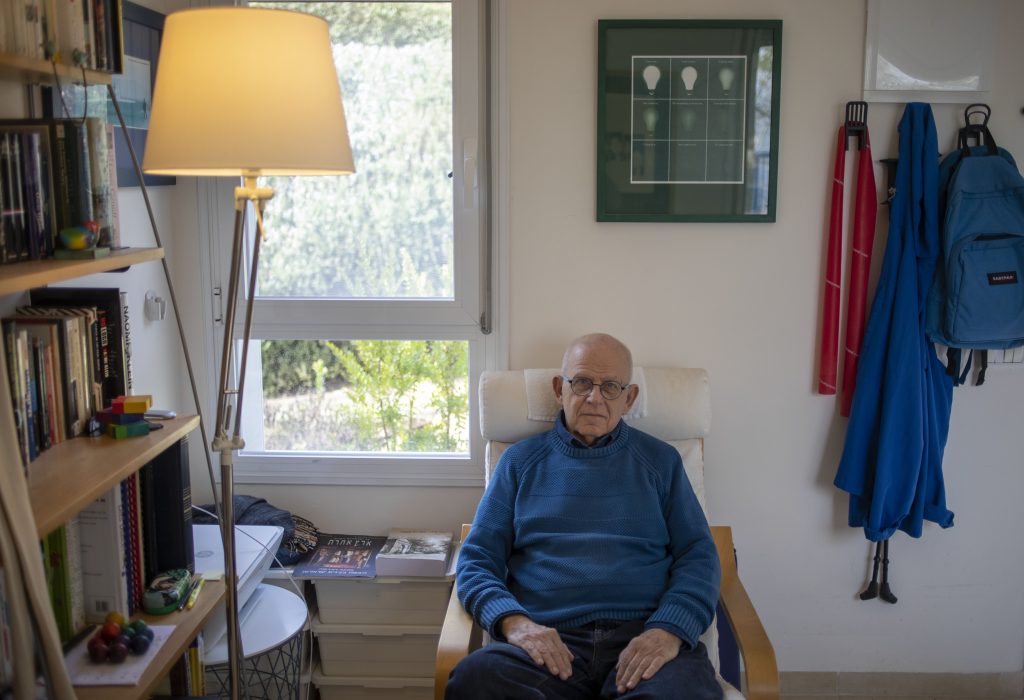 Shortly before they were rounded up by Nazi troops in Belgium and deported to Auschwitz in 1942, the parents of 3-year-old Maurice Gluck placed their only child in the care of a local Christian family. Gluck forgot his Yiddish mother tongue and that he even had parents of his own.

After the war, his devastated father came to claim him and several months later he was introduced to a weeping woman who showered him with hugs and kisses.

“My father said, ‘Look Maurice, this is your mother, Helen,'” he recalled.

Only years later did Gluck discover that his birth mother had actually perished along with more than a million other Jews in the Auschwitz death camp. Helen was in fact his aunt.

“She discovered that her sister had died so she looked for ways to find me immediately,” Gluck explained, choking back tears. “She was my only mother and will always be my mother.”

Seventy-five years after Auschwitz was liberated, Gluck is one of 75 Holocaust survivors featured in a commemorative photo project that Israel’s Yad Vashem Holocaust memorial produced along with award-winning German portrait photographer Martin Schoeller.

The exhibition, which opened Tuesday before German Chancellor Angela Merkel at the Ruhr Museum in Essen, is just one of the various events marking the anniversary and commemorating its victims as the notorious camp’s few and aging survivors slowly disappear.

Merkel said the portraits should be a reminder to everyone “to stand up for humanity, a reminder…not to stay silent and look the other way when someone is attacked, humiliated or their dignity is harmed.”

The main ceremony will be the World Holocaust Forum on Thursday, in which dozens of world leaders will arrive in Jerusalem for the largest-ever gathering focused on commemorating the genocide and combating modern-day anti-Semitism. Russian President Vladimir Putin, French President Emmanuel Macron, Britain’s Prince Charles and the presidents of Germany, Italy and Austria are among the more than 40 dignitaries who will be attending the event.

It comes amid a global spike in violence against Jews and in a climate in which a survey showed that 80% of European Jews said they felt unsafe in the continent. Tel Aviv University researchers reported last year that violent attacks against Jews grew significantly in 2018, with the largest reported number of Jews killed in anti-Semitic acts in decades. They recorded 400 cases, with the spike most dramatic in western Europe. In Germany, for instance, there was a 70% increase in anti-Semitic violence. In addition to the shooting attacks, assaults and vandalism, the research also noted increased anti-Semitic vitriol online and in newspapers, as extremist political parties grew in power in several countries.

“I grew up with this incredible sense of guilt and shock, which led me to question my own identity. How could people from my country commit these horrendous crimes?” said Schoeller, the photographer, explaining the impetus for the photo project. “It is very scary to see what is happening in Europe right now, that anti-Semitism has come back so strongly.”

Schoeller, a former assistant to Annie Leibovitz who is also renowned for his ‘hyper-detailed close ups’ of celebrities, took a series of intimate portraits of the 75 survivors that highlighted their weathered faces. Among those he bonded with during the photo shoots was Gluck, today an 80-year-old retired diamond merchant who lives in northern Israel.

Gluck’s own life story is directly connected to Auschwitz, the notorious Nazi death camp whose very name has become almost synonymous with the Holocaust.

His parents were captured and sent there shortly after the Van den Stock family of Brussels took him in and sheltered him for three years. They were later recognized by Israel for their actions as Righteous Among the Nations, the country’s highest honor for non-Jews who risked their lives to save Jews. Their descendants maintain a relationship to this day with Gluck and his children.

Gluck’s father, Eugene, survived a series of camps and the notorious “Death March” out of Auschwitz in its waning days. His wife Sara died there in 1943, among more than 1.1 million Jews who were killed in Auschwitz and the adjacent Birkenau death camp in gas chambers or from starvation, disease and forced labor in the meticulous Nazi effort to rid Europe of its Jews. Overall, the Holocaust claimed 6 million Jewish lives, wiping out a third of world Jewry.

When Sara’s sister Helen also emerged from the camp, she was determined to track down her nephew and raise him as her own. She eventually married Gluck’s father, moved with him to Israel and they had two other children together. Only at Gluck’s bar mitzvah, when according to Jewish tradition he became a man, did she tell him the truth.

“I ran away and cried all night,” recalled Gluck, now a grandfather of 10. “But in the morning, I went back to her and told her that it didn’t matter. She would always be my mother.”

Despite the early life trauma, Gluck said he considers himself among the lucky ones since he was raised with love.

“Do not forget but try to forgive,” he said of his lessons from the Holocaust. “In this world there are good people and bad people. Try to find the good ones.”