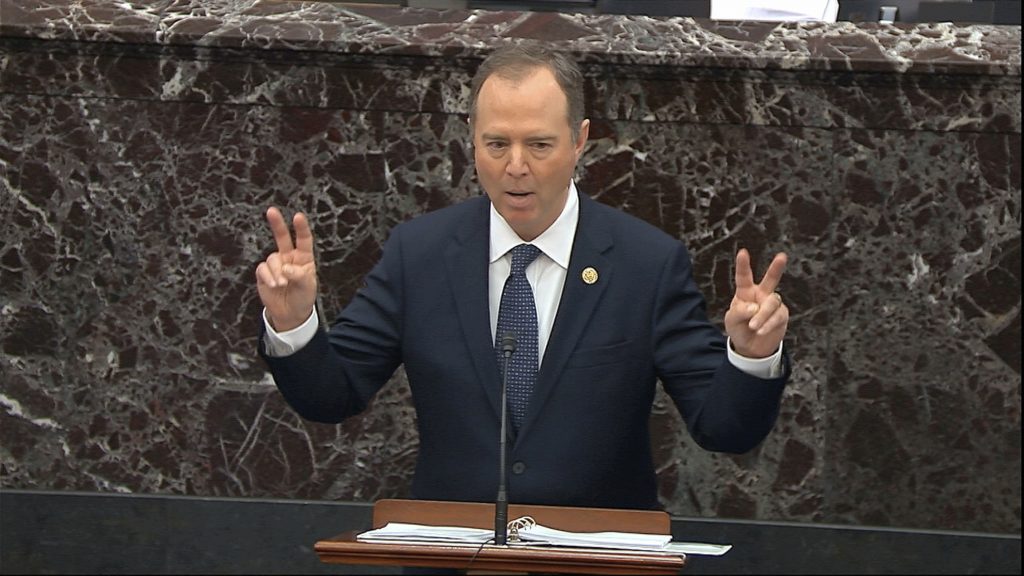 Roberts’ comments came around 1 a.m. Wednesday after another impeachment manager, Rep. Jerrold Nadler, charged that the White House lawyers were lying. Nadler, the House Judiciary Committee chairman, also told senators that voting to deny certain witnesses in the trial, as many GOP senators had, was a “treacherous vote” and a vote against the United States. Trump’s defense team responded that Nadler (D-N.Y.) should be embarrassed and should apologize to the president and the American people.

“I think it is appropriate at this point for me to admonish both the House managers and the president’s counsel, in equal terms, to remember that they are addressing the world’s greatest deliberative body,” Roberts said. He asked them to “avoid speaking in a manner and using language that is not conducive to civil discourse.”

Roberts is presiding over only the third presidential impeachment trial in U.S. history.

Opening the first day of House arguments, Schiff (D-Calif.) said he wanted to begin by thanking Roberts for “a very long day” and by thanking the senators for their patience. He said they were “deeply grateful” for their attention through the long days of arguments.

Schiff, chairman of the House Intelligence Committee, predicted before arguments began that “you’re going to have tempers flare” if a trial were to go late into the night. And on Wednesday, senators expressed frustration at the early morning tone. Sen. Josh Hawley (R-Mo.) called Nadler’s words “extraordinary.”

“They managed to alienate senators, attack their own jury,” said Hawley, who once served as a law clerk for Roberts. “I’ve never heard him deliver an admonishment like that from the bench, ever. He chooses his words very very carefully.”

Roberts’ words came as a surprise after he had remained mostly quiet during the first 12 hours of the day. But he made it clear, to both sides, that he was in charge and monitoring their conduct.

Roberts’ new role presiding over the trial is one of two jobs he is juggling as the impeachment session gets underway. On Tuesday morning, he oversaw two arguments at the Supreme Court before heading across the street to the Capitol.

Roberts was back on the bench at the high court again on Wednesday morning at 10 a.m. — just hours after the first day of the trial adjourned at 2 a.m. The court was hearing arguments in a case from Montana that could make it easier to use public money to pay for religious schooling in many states.

Over the past 14 years, Roberts has gotten comfortable in the role of chief justice of the United States, but presiding over Trump’s trial is a new, public role for Roberts, who is used to proceedings that aren’t televised as they are in the Senate.