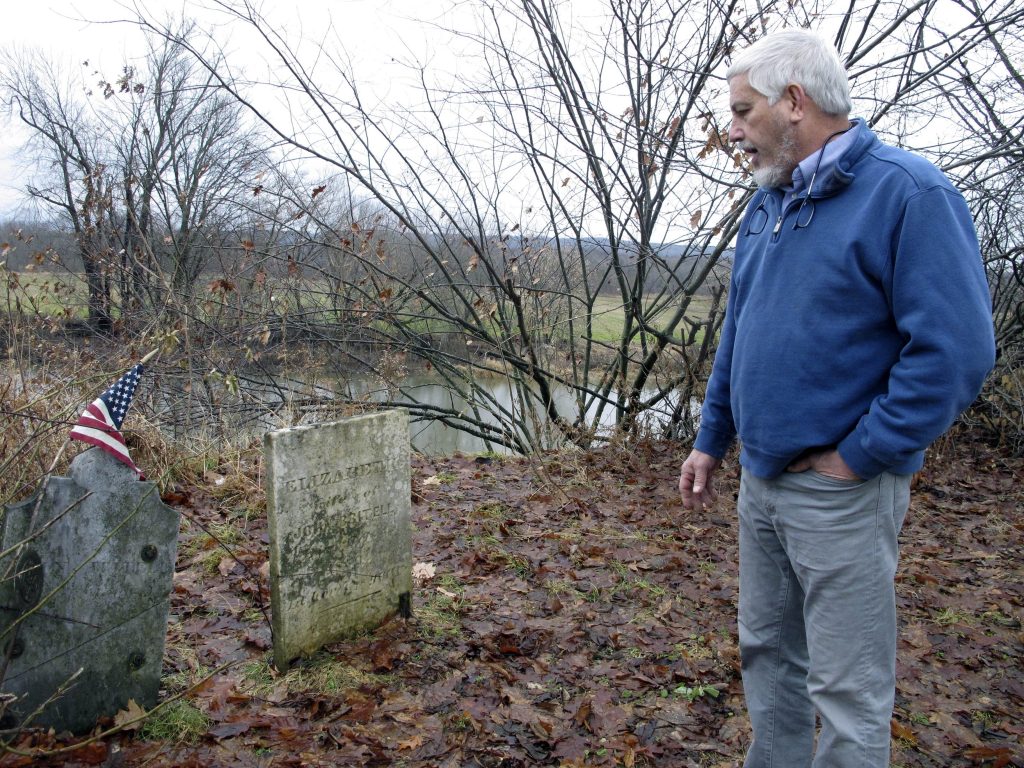 When Revolutionary War soldier Josiah Clark was buried in a small Vermont cemetery near a river bank in 1835, it was supposed to be his final resting place.

But erosion over the years made worse by more intense storms has washed away some graves and left the remains of Clark, who fought at the 1775 Battle of Bunker Hill in Massachusetts, precariously perched on the edge of the steep eroding bank. His bones were exhumed last spring, and now the town is trying to figure out what to do about the eroding cemetery, where another Revolutionary War soldier is also buried.

“That’s a big part of our history, and I think it’s terrible that … this is happening,” said Tom Giffin, president of the Vermont Old Cemetery Association.

Rising seas, erosion and flooding are putting some older graveyards across the country at risk. From western Alaska to Louisiana to the eastern shores of Maryland, some historical burial grounds are sinking or submerged in swamps. And the problems are not just in coastal areas.

“There’s no question but that archaeological and historic resources are threatened and arguably increasingly threatened with climate change effects,” including burial grounds, said David Anderson, a professor of anthropology at the University of Tennessee at Knoxville.

On an island off New York City, authorities in 2018 found 174 bones unearthed on a site that holds the remains of more than 1 million people. The culprit was shoreline erosion.

Hart Island has served as a potter’s field for New York City for nearly 150 years. People who couldn’t afford a funeral or whose bodies were not claimed when they died are buried in mass graves there. But part of the graveyard on a shoreline is gradually washing away.

Every time there’s a storm, she worries about Hart Island, she said.

Preliminary work has started to stabilize and reinforce the seawall that protects the island in various spots, particularly the north shore, which has seen the most erosion and was further damaged by Superstorm Sandy and subsequent storms, said Jason Kersten, a spokesman for the New York City Correction Department, which operates Hart Island.

Much of the project is funded by $13.2 million from the Federal Emergency Management Agency. Once the restoration is complete, the remains will be re-interred, he said. The Department of Parks and Recreation is in the process of taking over the island.

On the Eastern Shore of Maryland, the rising waters are threatening historic cemeteries, including a family burial ground on Robinson Neck Preserve in Dorchester County.

“Maryland’s Eastern Shore is experiencing sea-level rise at an accelerated rate due to land subsidence and other factors, and many of its other historical cemeteries are already experiencing flooding or turning into marshland,” said Joe Fehrer, a project manager for the The Nature Conservancy who is documenting the Robinson Neck site for the Maryland Historic Trust.

Preserving all the affected graveyards will likely be impossible, he said.

Another Vermont cemetery also has been hit hard. Tropical Storm Irene in 2011 swept dozens of sets of remains from a mountain cemetery down a raging stream in the town of Rochester. Some of the 50 sets of remains from the Woodlawn Cemetery were left intact in caskets ripped lose by floodwaters, while others were dispersed around the cemetery or down the stream. Six weeks later about half of the remains had been recovered.

“They will be finding remains in that river for 100 years,” Giffin said.

Off of a dirt road in Weybridge, Vermont, where Clark, the Revolutionary War soldier was laid to rest, some of the other 20 or so sets of remains in the graveyard have been lost in the soil and stream.

“You’re talking about a whole cemetery being eroded over the bank,” Giffin said. “I’ve never seen one as bad as this one, ever.”

For now, the cemetery’s future remains uncertain. A woman who lives part time in the historic stone home adjacent to the cemetery had offered land onto which the graveyard could be moved. Before taking on the cemetery, Selectboard chairman Don Mason said he thinks the dirt road leading to it that was damaged in a storm needs to be repaired first.

Clark’s remains are being held by the town in a box . He and his wife’s headstones have been moved away from the bank.

Like so many aging graveyards, the costly repairs are often the responsibility of the towns or cemetery associations, which may lack the funds to protect these sites.

“When you go to town meeting and you ask do you put money to an old cemetery, (or do) you buy new text books, it’s kind of a no-brainer for the town,” said Giffin. “But this was a big piece of not only Vermont history but United States history.”