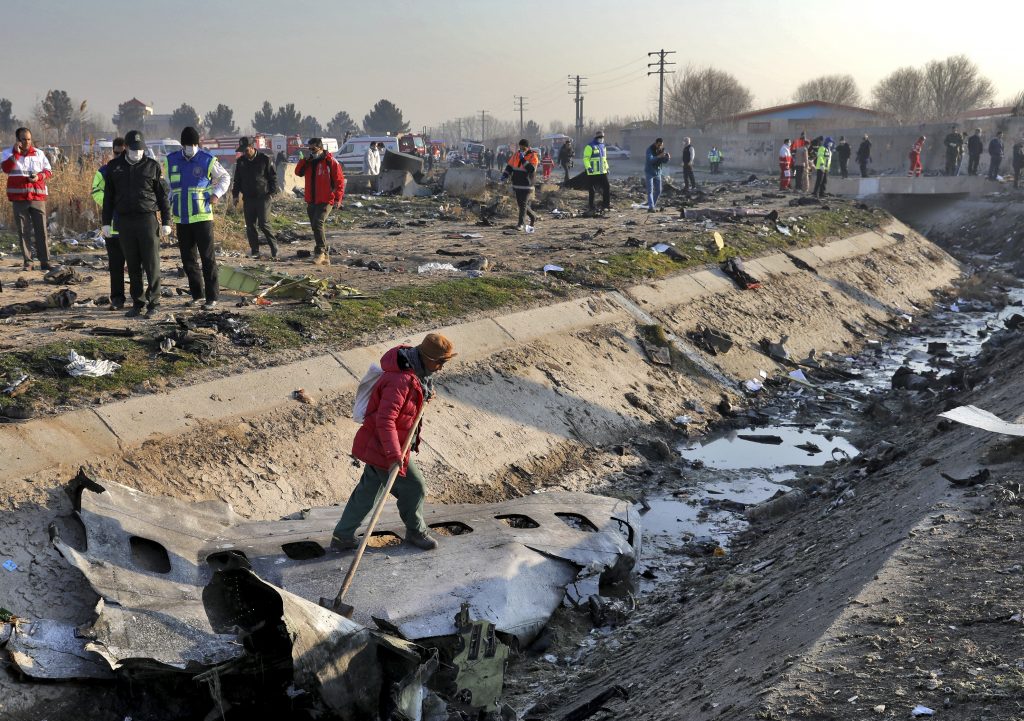 Iran said it had asked the U.S. and French authorities for equipment to download information from the black boxes on a downed Ukrainian airliner, potentially angering countries which want the recorders analyzed abroad.

Prime Minister Justin Trudeau of Canada, which lost 57 of the 176 people killed in the crash, said Iran did not have the ability to read the data and demanded the cockpit and flight recorders be sent to France. Kiev wants the recorders sent to Ukraine.

The U.S.-built Boeing 737 flown by Ukraine International Airlines was shot down in error by Iranian forces on Jan. 8 during a period of tit-for-tat military strikes that included the killing by the United States of a senior Iranian general on Jan. 3.

Tehran, already embroiled in a long-running standoff with the United States over its nuclear program, has given mixed signals about whether it would hand over the recorders.

An Iranian aviation official had said on Saturday the black boxes would be sent to Ukraine, only to backtrack in comments reported a day later, saying they would be analyzed at home.

A further delay in sending them abroad is likely to increase international pressure on Iran, whose military has said it shot the plane down by mistake while on high alert in the tense hours after Iran fired missiles at U.S. targets in Iraq.

“If the appropriate supplies and equipment are provided, the information can be taken out and reconstructed in a short period of time,” Iran‘s Civil Aviation Organization said in its second preliminary report on the disaster released late on Monday.

A list of equipment Iran needs has been sent to French accident agency BEA and the U.S. National Transportation Safety Board, the Iranian aviation body said.

“Until now, these countries have not given a positive response to sending the equipment to [Iran],” it said. It said two surface-to-air TOR-M1 missiles had been launched minutes after the Ukrainian plane took off from Tehran.

Iran‘s aviation body says it does not have the equipment needed to download information from the model of recorders on the three-year-old Boeing 737.

General Electric Co has received a license from the U.S. Treasury Department to help in the investigation of the crash, a GE spokesman told Reuters on Tuesday.

Under U.S. sanctions law, the Treasury’s Office of Foreign Assets Control (OFAC) must grant approval for U.S. investigators to participate in the probe and potentially travel to Iran.

GE co-owns with France’s Safran SA the French-U.S. firm CFM that made the plane’s engines.

Trudeau said the data should be downloaded immediately.

“There need to be qualified experts doing that but it’s also a question of technology and equipment and that is not available in Iran,” he told a news conference in Winnipeg, Manitoba.

“There has been broad consensus in the international community that France would be the right place to send those boxes [and] we continue to pressure Iran to do just that.”

Trudeau also said Tehran’s refusal to acknowledge dual citizenship was posing a challenge when it came to helping support the families of the Canadian victims, many of whom had close ties to Iran.

Iran, which took several days to acknowledge its role in bringing down the plane and faced street protests at home as a result, fired its missiles at U.S. targets in response to a U.S. drone strike that killed General Qassem Soleimani in Iraq on Jan. 3.

Iran has for years faced U.S. sanctions that limited its ability to purchase modern planes and buy products with U.S. technology. Many passenger planes used in Iran are decades old.

Under Tehran’s 2015 nuclear agreement with world powers, Iran received sanctions relief in return for curbing its nuclear work. But Washington reimposed U.S. sanctions after withdrawing from the pact in 2018, a move that led to the steady escalation of tension in recent months between the United States and Iran.

European governments say they want to save the deal but have also suggested it may be time for a broader pact, in line with Trump’s call for a deal that would go beyond Iran‘s nuclear work and include its missile program and activities in the region.

Iran says it will not negotiate with sanctions in place.

Since the plane disaster, Iran‘s judiciary chief Ebrahim Raisi has said compensation should be paid to families of the victims, many of whom were Iranians or dual nationals.

Canada, Ukraine, Britain, Afghanistan and Sweden, which all lost citizens, have demanded Iran make the payouts.