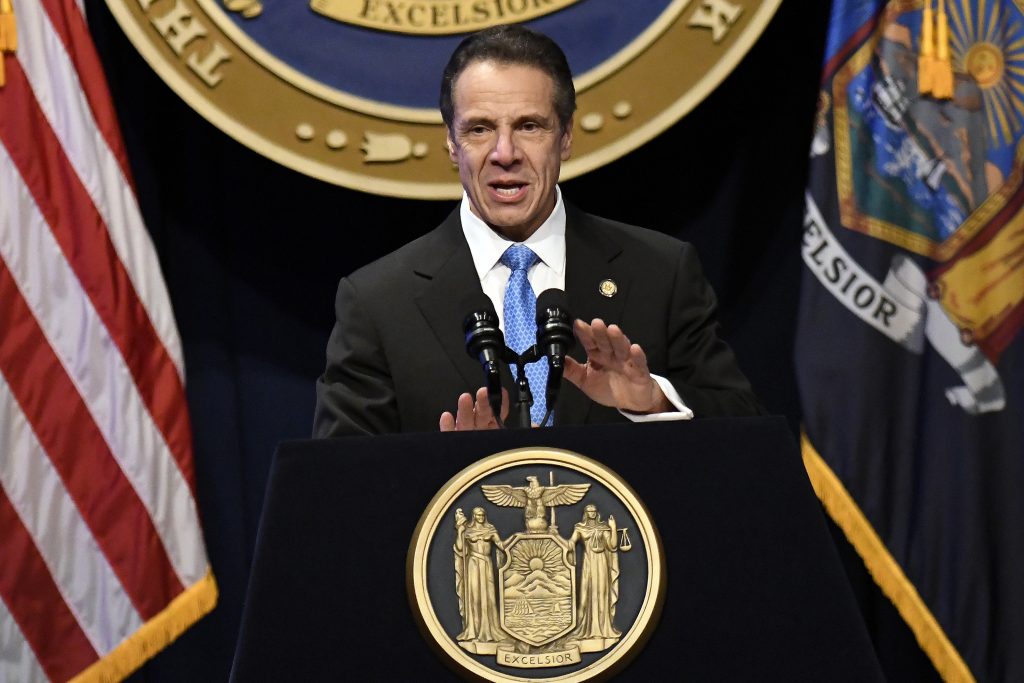 New York Gov. Andrew Cuomo unveiled a $178-billion state budget proposal Tuesday that hinges on a plan to launch a team tasked with reining in the nation’s largest Medicaid program.

The new Medicaid Redesign Team will be asked to find ways to trim $2.5 billion in spending from the program, Cuomo said.

Cuomo said one out of three New Yorkers — 6 million people — are on Medicaid, the government health-care program for people with low incomes.

“And this is something to be proud of,” he said. “But the Medicaid system has to be fiscally sustainable.”

Cuomo, a Democrat, didn’t spell out exactly where he expected those savings to come from, but he hinted that the health-care industry — which has feared an increase in taxes on health insurance that insurers warn could hike consumer costs — may have to provide “new resources,” eliminate inefficiencies or root out waste, fraud and abuse. His budget director Robert Mujica said the Cuomo administration is leaving the substance of potential solutions up to the Medicaid Redesign Team, which would include representatives from the health-care industry.

Cuomo said the savings must have “zero impact” on Medicaid beneficiaries. He also promised the state wouldn’t sock local governments with a higher share of program costs, as long as they could keep cost increases to 3% per year or less. Municipalities now have some of their Medicaid costs covered by the state under a deal cut years ago to limit property-tax increases.

The redesign team will report its recommendations before the April 1 deadline to pass the budget.

Legislative leaders said they want lawmakers involved in trimming Medicaid. “How we get there is the issue, and we certainly want to be involved in that,” Democratic Senate Leader Andrea Stewart-Cousins said.

Republican leaders said they were skeptical of Cuomo’s optimism that New York can cut $2.5 billion in Medicaid without hurting people or localities. “There’s no way, no way you can say you’ll have no effect on local (governments), and no effect on beneficiaries,” Senate Minority Republican Leader John Flanagan said.

The Medicaid proposal was part of an overall spending plan that would increase state spending by 1.9%. Cuomo proposed a $176-billion budget last year, a 2% increase over the previous fiscal year.

The release of Cuomo’s proposal launches a process that includes hearings starting next week, legislative spending proposals and tweaks from the governor ahead of a March 31 deadline. The governor has wide influence on the state budget, which has increasingly included policy proposals on top of spending.

Advocacy groups from across the state that point to signs of a growing New York economy are calling for increased spending on schools, mental-health programs, anti-poverty efforts, substance-abuse prevention, environmental protection and infrastructure projects. The governor proposed a 3% — or $826 million — increase in school aid and called for a new education-funding formula that better helps the neediest school districts.

Some liberal groups are calling for higher taxes on the wealthy to help address the looming $6 billion deficit this year and down the road.

“It’s going to hurt people,” Strong Economy for All Coalition Executive Director Michael Kink said of the cuts. “Billionaries and ultrabillionaires have all the money. Asking them to pay their fair share should restore these cuts.”

Cuomo said on top of Medicaid savings his administration will close the budget gap with over $1 billion in higher-than-expected tax revenues and $1.8 billion in local aid savings. The governor’s budget would allow state budget officials to cut local aid by up to 1% if the state faces a potential budget imbalance of $500 million or more.

Higher-than-expected Medicaid spending fueled by large enrollment growth had been one reason for a ballooning budget gap that was disclosed months ago after lawmakers had passed last year’s budget. Cuomo’s budget director said Tuesday that the administration believes there’s waste, fraud and abuse in Medicaid that’s not getting addressed.

“Some of it frankly, I think that the department was not actually tracking,” Mujica said. “And we accept responsibility for that. That’s why we’re fixing it.”

Leaders of nursing homes and hospitals warn further cuts will harm vulnerable New Yorkers and are calling on the state to work with providers to find possible savings. Cuomo’s administration has previously announced 1% cuts in payments to health-care providers this year under the program, and has pushed for other Medicaid payments cuts in the last year.

“We can’t balance the budget on the backs of vulnerable New Yorkers who depend on Medicaid funding to live,” Consumer Directed Personal Assistance Association of New York Executive Director Bryan O’Malley said.

The governor is also trying once again to legalize marijuana in New York.

Legalization efforts failed last year over disagreements on where an estimated $300 million in annual revenues from marijuana sales should go. Lawmakers instead reduced criminal penalties for possessing small amounts of marijuana.

Cuomo is calling for a new state university center to study cannabis and CBD (cannabidiol). He also wants to work with neighboring states that are also considering legalization.

It’s unclear whether lawmakers seeking reelection this year will pass marijuana legalization. Will Barclay, the top Republican in the Assembly, said it seems contrary that Cuomo and the state are trying to reign in vaping while also proposing to legalize marijuana.

The governor’s proposal would ban both flavored vaping products and the sale of tobacco products — including e-cigarettes — in all pharmacies.