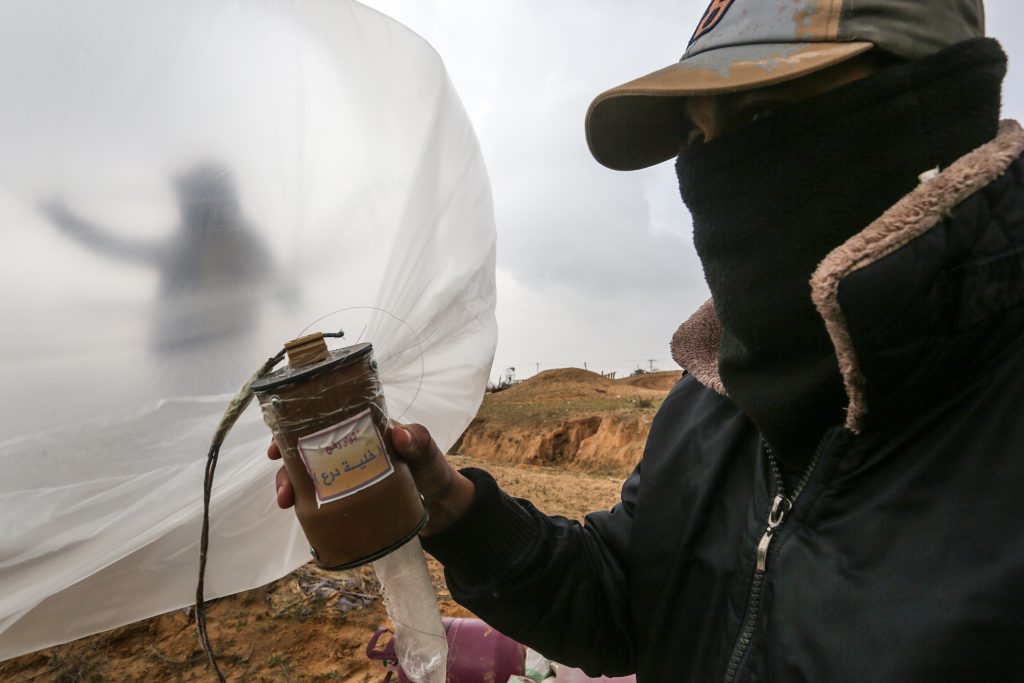 Police on Monday afternoon were called in to check a bunch of suspicious balloons that had landed in the town of Mesilat Tzion, near Beit Shemesh. A police bomb squad arrived to check the balloons for explosives, and to detonate them in a safe manner. Police called on Israelis to be wary of bunches of balloons, and to call police when balloons are sighted.

Police did not immediately say if the balloons found Monday contained explosives, or if they originated in Gaza. Mesilat Tzion is about 75 kilometers from Gaza, which means the balloons would have had to travel a great distance and remain aloft and intact in order to land in the community. The town is much closer to Chevron, from where terror balloons have been launched in the past.

Over the weekend, Gaza terrorists released several volleys of terror balloons, sending them over the Gaza security fence into Israel. One bunch of balloons landed in the backyard of a house in Sderot. Bomb squad officers arrived to defuse explosives that were attached to the balloons. In several cases, bunches of balloons exploded in midair when their payloads were set off by wind or other atmospheric factors. Balloon launches continued Sunday, with a bunch exploding in the air near Netivot.

The Hamas “balloon corps” announced Sunday that it would continue with terror balloon attacks, as part of Hamas’s increased terror efforts. A weekend report in the Lebanese al-Ahbar newspaper said that Hamas and Islamic Jihad had decided to step up their attacks in order to pressure Israel, which they believe has been dragging its feet on a deal for a long-term ceasefire. Under that deal, Israel will issue thousands of work permits to Gaza residents, ease restrictions on imports to Gaza, and help develop infrastructure. Hamas will prevent rocket attacks on southern Israel and limit riots along the Gaza border fence. That latter condition has already been fulfilled, with the terror group holding demonstrations on a monthly instead of a weekly basis.