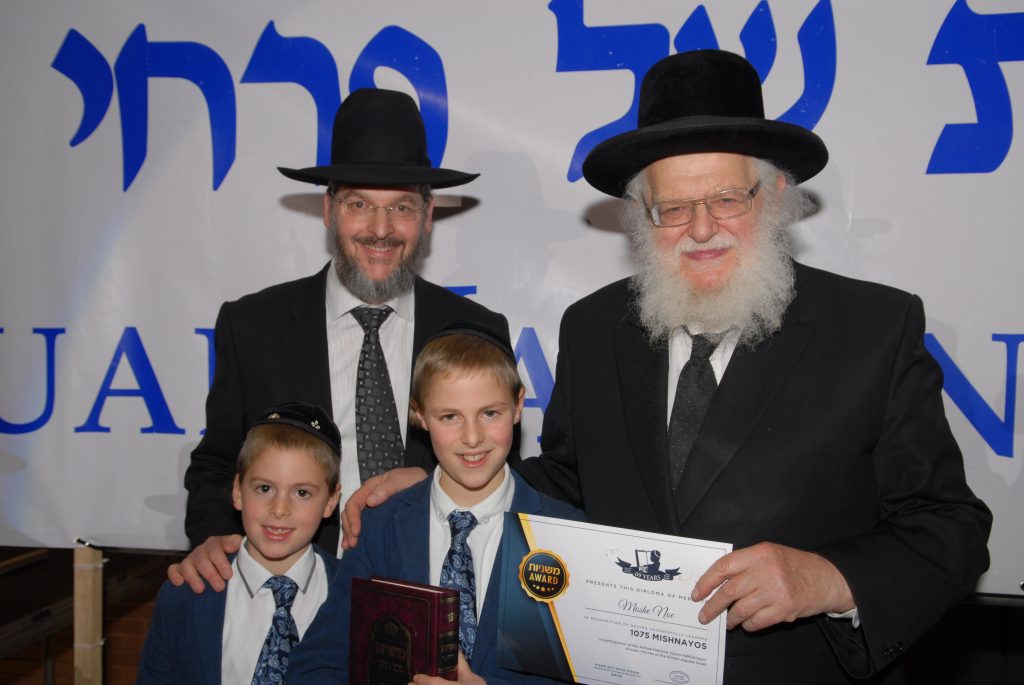 The Torah world was darkened on Monday morning with the sad news of the sudden petirah at the age of 77 of Harav Pesach Eliyahu Falk, zt”l. Rav Falk is known and recognized across the globe as one of the foremost baalei halachah. His sefarim and shiurim can be found in thousands of households. The levayah took place in Gateshead on Monday, midday, and was one of the largest in recent memory. A dense crowd of people filled the streets around Yeshivas Beis Yosef Gateshead and the Gateshead Seminary. They were paying a last tribute to the tzaddik who had walked unobtrusively along those streets for more than half a century and had devoted his life to Klal Yisrael.

Harav Pesach Eliyahu was born in Manchester in an age when learning Torah was not fashionable. His parents, Mr. and Mrs. Avrohom Zvi Falk, were paragons of yashrus. Mr. Falk sold sifrei kodesh and was mekarev many of his customers with his integrity and uprightness. The walls of their house were ingrained with pure yiras Shamayim and kvod Rabbanim. This was the atmosphere that surrounded Pesach Eliyahu in his youth. Even when he was young, he became known as a masmid. His tefillos were always said slowly and with kavanah. He went to Yeshivas Beis Yosef Gateshead, learning under the Roshei Yeshivah, Harav Leib Gurwicz and Harav Leib Lopian, zecher tzaddikim livrachah. Even in those days, Pesach Eliyohu was known to have a good influence over other bachurim who came in contact with him. He later learned in the Brisker Kollel in Yerushalayim, when he married his eishes chayil, daughter of Reb Shraga Steinhaus, z”l. After a time, they moved back to England and settled in Gateshead, where he would stay for the rest of his life.

Harav Pesach Eliyahu was a member of the Gateshead Kollel for many years. Even after he officially left kollel, he still davened there. While in kollel, he began to concentrate on practical halachah, focusing on clarifying each topic shmaatsa aliba d’hilchasa. During these years he began giving shiurim on Mishnah Berurah to small groups of bachurim. These groups would later develop into the large shiurim in many mosdos which followed. Eventually, Rav Falk decided to leave kollel and devote his life to spreading halachah. Initially, this was through his regular shiurim in the yeshiva for bachurim and the seminary for girls. His shiurim became popular due to their precision and clarity. He put much effort into making them available in the form of sefarim. Rav Falk personally supervised the preparation of the original typed texts and similarly later when they were published. Zachor v’Shamor presents hilchos Shabbos in unprecedented clarity, and Oz v’Hadar elucidate the fundamental principles of hilchos tznius.

However, his masterwork is the two-volume Sefer Machzeh Eliyahu. This sefer contains a classic collection of She’eilos U’teshuvos on many practical Orach Chaim inyanim. The sefer has valuable warm haskamos, including Harav Shlomo Zalman Auerbach, Harav Moshe Feinstein, Harav Yitzchok Yaakov Weiss and Harav Shmuel Wosner, zecher tzaddikim livrachah. It is said that when Harav Shlomo Zalman examined Rav Falk’s work, he exclaimed that it was in the style of teshuvos from the older generations, and Rav Falk would merit a place in Gan Eden next to the Chofetz Chaim, zt”l, because of it.

Rav Falk became very much in demand for shiurim in halachah and hashkafah. He spoke in many of the mosdos of Gateshead. He was the guest speaker on many occasions in other towns. The words that came from his pure heart were able to penetrate the hearts of his listeners. Eventually, he became recognized worldwide as a top authority in halachah. Despite his busy schedule, Rav Falk always made himself available at any time of the day or night for anyone who had a problem and wanted to ask advice. Rav Falk never wanted fame, and shunned the limelight. But he wrote for the needs of the generation. His sefer Oz v’Hadar Lvushah was translated into English: Modesty — An Adornment for Life, and instantly became popular. The sefer sets out in practical terms the Torah parameters in tznius. Rav Falk continued his heavy schedule of shiurim despite ill health right up till the end of his life.

The levayah started at his house and was attended by a huge crowd, including people from all the various Gateshead mosdos. Outside the yeshiva, the Rosh Yeshivah, shlita, Harav Avrohom Gurwicz, was maspid. The levayah continued to the Gateshead Kollel, where Harav Yaakov Yehudah Salomon, Mashgiach Yeshivas Tiferes Yaakov and Rav Steinhart, a son-in-law of the niftar, delivered hespeidim. Finally, Harav Simcha Kohn, principal, Gateshead Teachers’ Seminary, was maspid outside the Seminary. Many women, some of whom were his talmidos, were in attendance. The levayah left for London, pausing at Ferrybridge, a station near Manchester. Despite the short notice, a large crowd met the levayah and more hespeidim were delivered before it continued to North West London, where many people assembled at Hendon Adass Shul, where the maspidim were the Rav of the Shul, Rabbi S.Y. Bixenspanner, Harav S.F. Zimmerman and Dayan A.D. Dunner, a brother-in-law. Many of the people who came considered themselves his talmidim and had benefited from his ayin tovah to help everyone. Later in the evening, the aron was flown to Eretz Yisrael. Kevurah was held Tuesday morning on Har Hamenuchos in Yerushalayim.