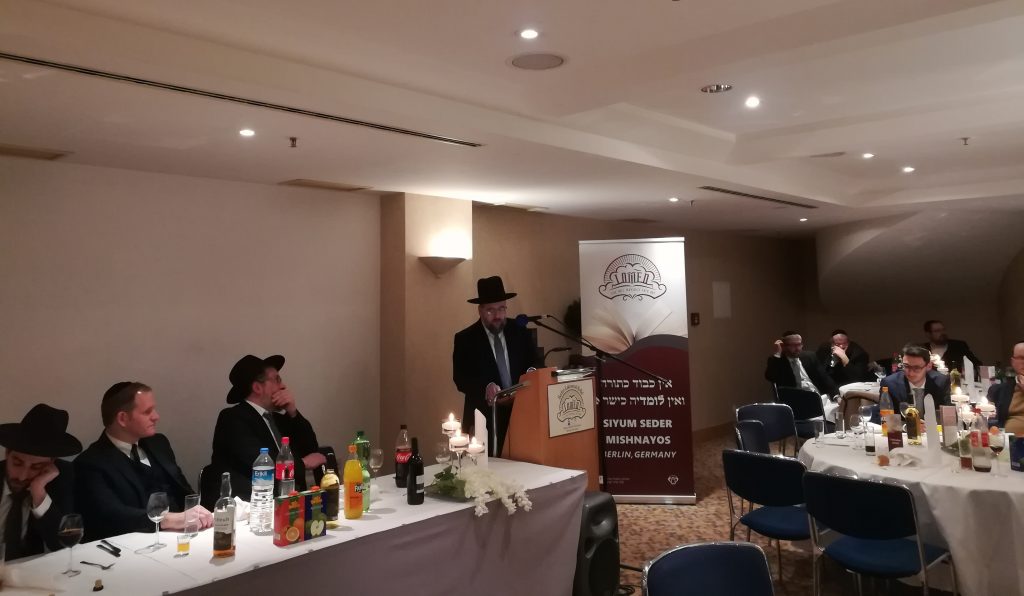 When ordinary things happen in unordinary places, it can be extraordinary. When a Siyum Seder Mishnayos takes place in Berlin, Germany, as it did Sunday, it was just that.

For many, Berlin conjures up black-and-white images of Nazi officers and the Holocaust. But there is a different Berlin that is less well-known: the Berlin that today is home to about 80 shomrei Shabbos families, the largest frum community in Germany.

Germany has some 120,000 Jews, many of whom arrived from the Former Soviet Union after its collapse in 1991. Only a small fraction of Germany’s Jews are observant, but for those who are, Berlin serves as the vibrant hub of Yiddishkeit, and spreads its warmth throughout the country. With the largest frum school and over 150 children in preschool, Berlin’s chinuch options attract families from across Germany.

More recently, Kahal Adass Jisroel charged Beth Medrash Govoha with an important mission: Get five American yungeleit to move to Berlin and start a kollel. BMG complied, and two years ago the first wave of yungeleit arrived. Since then, the kollel and Kahal Adass Jisroel have melded to become one entity.

One of the kollel’s most successful projects is the LOMED Mishnayos program, in which two Mishnayos are studied every day, at which rate a seder is finished approximately once a year.

Today, Berlin celebrated the completion of Seder Nezikin, the second seder to be completed in the program. At a beautiful event, which included a lavish dinner, the kehillah joined together to celebrate this communal achievement of limud haTorah.

Sets of Seder Nashim Mishnayos were given to the mesaymim to aid them in tackling their next seder, as the recognition of past accomplishments joined with the realization that the work is never over. Festive singing and dancing overtook the room, followed by divrei brachah from the Mara D’Asra, Harav Dovid Roberts, and ending with a kumzitz.

But if so many of the parents were at the Siyum, where were the children? More than one hundred children, up to 11 years of age, celebrated in their own way, with the older children sent on an exciting trip, and the younger ones kept entertained on site, joining the adult’s program for the kumzitz – because the Siyum is not just about the community that is here today, but about the Klal Yisrael that will be in the future.