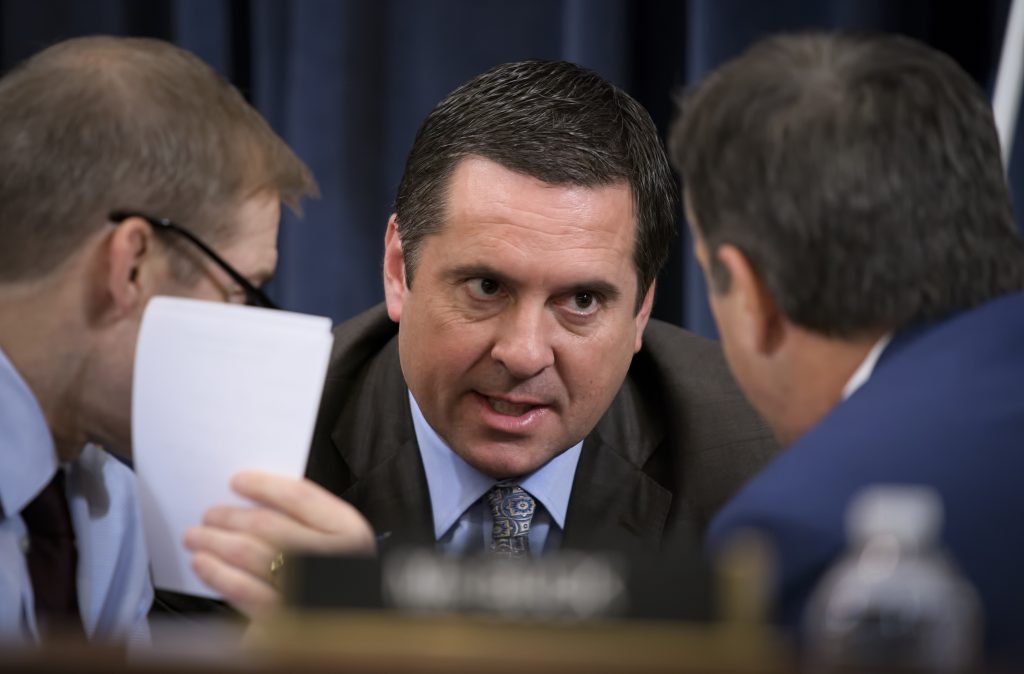 New documents released by House Democrats suggest that Rep. Devin Nunes, the top Republican on the House Intelligence Committee, was more deeply involved than was previously known in efforts by allies of President Donald Trump to dig up dirt in Ukraine on former Vice President Joe Biden.

Democrats on the Intelligence Committee released a trove of text messages, photos and other documents Friday night as part of the impeachment inquiry. The materials were provided to the House by Lev Parnas, a Florida businessman who worked with Trump personal lawyer Rudy Giuliani to try to persuade the Ukrainian government to launch an investigation into Biden.

Nunes initially denied knowing Parnas but has since been forced to admit the two had spoken. The messages released Friday show about 100 text messages traded over months between Parnas and the California Republican’s staffer, Derek Harvey, a retired U.S. Army colonel. Harvey previously served at the White House on Trump’s National Security Council.

Parnas and his business partner, Igor Fruman, both U.S. citizens who emigrated from the former Soviet Union, were indicted last year on charges of conspiracy, making false statements and falsification of records. Prosecutors allege they made outsize campaign donations to Republican causes after receiving millions of dollars originating from Russia. The men have pleaded not guilty.

Friday’s document dump included dozens of texts exchanged between Parnas and Harvey last Spring over the encrypted messaging service WhatsApp. They show Parnas providing documents and helping set up meetings for Harvey with Ukrainians who have made unsubstantiated claims that as vice president Biden orchestrated the firing of a prosecutor who was investigating corruption allegations involving Burisma, a energy company where Hunter Biden served as a board member from 2014 to 2019.

Among the documents Parnas sent to Harvey is a scan of the Ukrainian passport of Burisma’s founder. The texts also show Harvey scheduling phone calls with Parnas and a face-to-face meeting at the Trump International Hotel in Washington.

A spokesman for Nunes’ congressional office did not respond to messages left by email and phone on Saturday.

Phone records released by House Democrats in December showed several calls between Parnas and Nunes, who helped lead the Republican’s defense of Trump during the House impeachment hearings.

Nunes initially said he couldn’t remember ever speaking with Parnas. But this week, after new documents were released showing additional contacts, Nunes said his memory had been jogged.

“I checked it with my records and it was very clear — I remember that call, which was very odd, random, talking about random things, and I said, ‘great,’ you know, ‘talk to my staff,’ and boom, boom, boom,” Nunes told Fox News on Wednesday. “That’s just normal operating procedure.”

Last month, Nunes threatened to sue Democratic Rep. Ted Lieu if his fellow Californian didn’t apologize for statements accusing him of conspiring with Parnas. After the new documents emerged, Lieu responded on Twitter: “Devin, I’m adding to my statement: ‘Your pants are on fire.'”

The documents released late Friday included more text messages between Parnas and Robert F. Hyde, a Republican candidate for Congress from Connecticut, who claimed to be in contact with people in Kyiv who were conducting surveillance on former Ambassador to Ukraine Marie Yovanovitch before she was ousted by the Trump administration last spring.

The messages included screenshots of exchanges between Hyde and a Dutch man named Anthony De Caluwe. Hyde denied he was actually tailing the ambassador.

In a profanity-laced video posted online Friday, Hyde alleged the messages were probably “from some intel guy” who was “trying to set Trump up.” “I’m sure if I disappeared or died or they gag-ordered me, they’re going to use me as a smoking gun, some (expletive) like that I have Ukrainian ties.”

FBI agents were observed visiting Hyde’s home and business on Thursday, while police in Ukraine have opened an investigation into whether the U.S. ambassador was illegally surveilled.

In a statement issued to The New York Times on Saturday, De Caluwe denied having any contacts in Ukraine and dismissed his exchange with Hyde was just “ridiculous banter.”