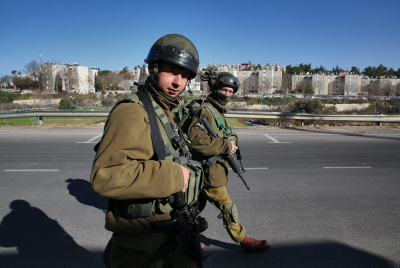 An Israeli was stabbed in Kiryat Arba, on the road between Kiryat Arba and Me’aras Hamachpelah, on Shabbos afternoon. The 22-year-old was stabbed by a 17-year-old terrorist in his shoulder, sustaining moderate injuries. He was treated on site and then taken to a hospital in Yerushalayim for further treatment. The terrorist ran away after stabbing his victim, and was captured a short time later. The stabbing victim is an organizer in the Otzma Yehudit party.

Gaza terrorists over Shabbos released several volleys of terror balloons, sending them over the Gaza security fence into Israel. One bunch of balloons landed in the backyard of a house in Sderot. Bomb squad officers arrived to defuse explosives that were attached to the balloons. In several cases, bunches of balloons exploded in midair when their payloads were set off by wind or other atmospheric factors.

A terrorist was killed in Gaza after he picked up an unexploded shell in a field near the Gaza border fence. A second terrorist was critically injured in the incident. The two were attempting to launch a bunch of incendiary balloons at Israel when the shell exploded.