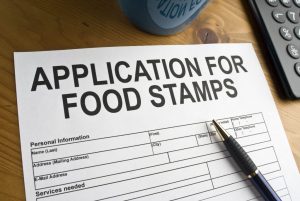 A coalition of 14 states along with Washington, D.C., and New York City sued Thursday to block the Trump administration from cutting off food stamp benefits from nearly 700,000 unemployed people, the first of three such planned measures to restrict the federal food safety net.

In the lawsuit, attorneys general from the District, Maryland, Virginia, New York, California and other states, warned that “drastic” cuts would affect 688,000 to 850,000 adults without children. They asserted the justification for the cuts were based on no evidence and ignored local labor market conditions.

“States are in the best position to evaluate local economic circumstances and to determine where there are insufficient job opportunities such that work requirements would be ineffective,” they said in a 99-page lawsuit, filed Thursday in federal court in Washington. The new rule “eliminates State discretion and criteria” and will terminate “essential food assistance for benefits recipients who live in areas with insufficient jobs.”

The lawsuit is the latest confrontation between the Trump administration and Democratic-governed states, one set off by aiming changes at a program that serves poor and unemployed people and disproportionately affects large cities. Other proposed changes would push 3 million off food assistance.

In the lawsuit, states along the northeastern U.S. corridor joined by California, Michigan, Minnesota, Nevada and Oregon said their governments would face heavy new administrative and financial burdens, economic damages and increased costs from “the negative health effects of malnutrition and instability.”

A Justice Department spokeswoman declined to comment on the lawsuit.

In a joint conference call with reporters, New York State Attorney General Letitia James, a Democrat, added, for unemployed people from rural Appalachia to the Mississippi River delta to the Bronx in New York, “SNAP benefits are often the difference between eating and going hungry. It’s that simple.”