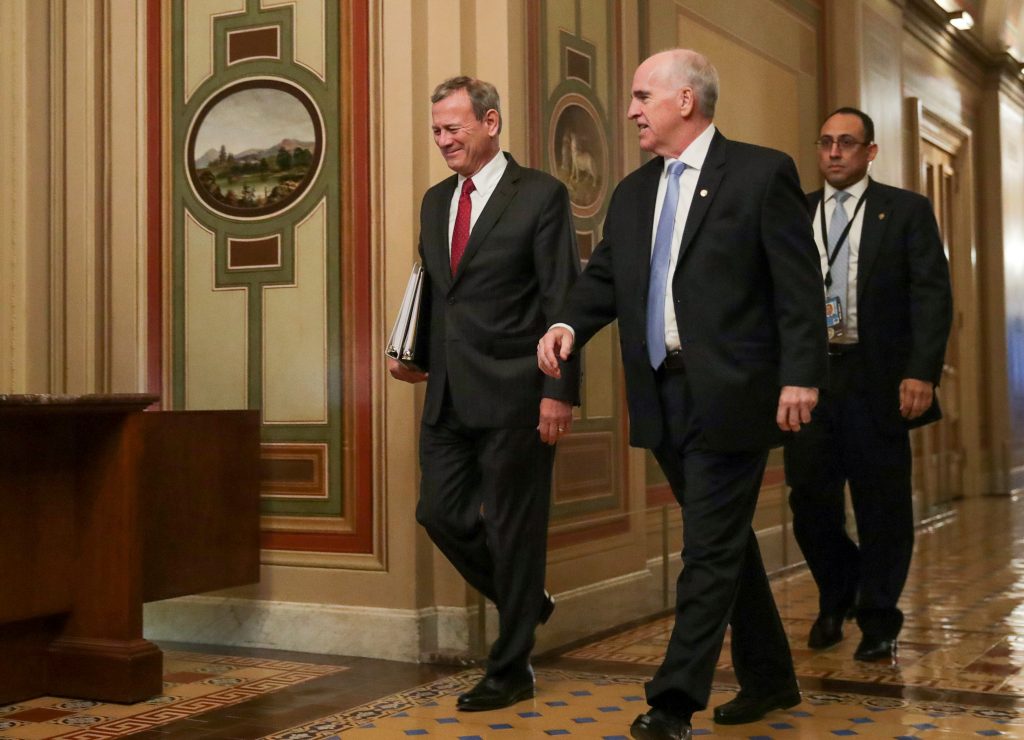 The Senate impeachment trial on whether to remove U.S. President Donald Trump from office formally began on Thursday.

Here is what to look out for next as the proceedings advance.

If the Democratic-led House of Representatives wants to file a trial brief it must do so by 5 p.m. on Saturday.

President Trump has until 6 p.m. to file a response to the impeachment charges. That document is to be submitted to the secretary of the Senate.

The House has until noon to file its reply to the secretary of the Senate.

President Trump has until noon to file a trial brief that would contain detailed materials from his lawyers.

If the White House files a trial brief on behalf of President Trump, the House has until noon to file a rebuttal brief if it so chooses.

The trial resumes at 1 p.m.

A vote could be held sometime during the day on Senate Majority Leader Mitch McConnell’s proposed rules governing the first phases of the trial, which would leave open the option of voting later on whether witnesses would testify and new evidence could be introduced.

Democratic House “managers” who form the prosecution team will begin to present their case against President Trump, and the president’s legal team will respond, with senators sitting as jurors. McConnell has said the Senate will sit in session six days a week, taking only Sundays off.

Following the opening arguments, which could take days to present, senators would then be given time to submit questions to each side.

McConnell has not yet published a draft of his proposal on trial procedures but has said it would be similar to one adopted in January 1999 during the impeachment of Democratic former President Bill Clinton.

That resolution allocated 24 hours for representatives of each side to make oral arguments and set aside 16 hours for senators to ask questions.

The Clinton resolution referenced by McConnell did not resolve whether witnesses would be called. A follow-up resolution allowing for three witnesses to testify in videotaped depositions passed later along a party-line vote.

Democrats will push to hear from witnesses during the trial. If McConnell’s resolution on initial trial rules is adopted, as expected, senators would likely vote some time after the trial has started on whether to introduce witness testimony sought by the Democrats. Republicans could seek to call witnesses of their own as well, though the White House said on Thursday it did not think witnesses are necessary.

The Senate now has 53 Republicans, 45 Democrats and two independents who usually vote with the Democrats. That means four Republicans would need to cross party lines and join Democrats in requesting witness testimony.

The trial could continue into February, when Iowa and New Hampshire hold the first nominating contests for the 2020 presidential election. That could pose logistical problems for the four senators seeking the Democratic nomination: Bernie Sanders, Elizabeth Warren, Amy Klobuchar and Michael Bennet.

On Feb. 4, President Trump is scheduled to deliver the annual State of the Union address to a joint session of Congress. In 1999, Clinton delivered such a speech in the House chamber in the midst of his Senate impeachment trial.