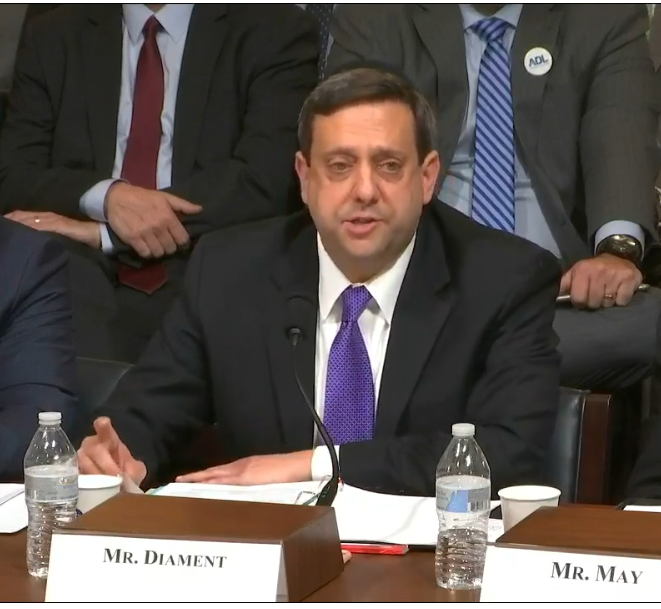 On Wednesday, the House Subcommittee on Intelligence and Counterterrorism held a hearing on “Confronting the Rise in Anti-Semitic Domestic Terrorism.”

Nathan Diament, Executive Director of OU, who also serves on the Homeland Security Advisory Council’s Subcommittee for the Prevention of Targeted Violence Against Faith-Based Communities, was one of seven witnesses.

Following is the complete text of Diament’s prepared testimony:

Chairman Rose, Ranking Member Walker and Members of the Subcommittee, my name is Nathan Diament and I am the executive director for public policy for the Union of Orthodox Jewish Congregations of America (also known as the Orthodox Union) – the nation’s largest Orthodox Jewish umbrella organization.

The Orthodox Union represents more than 1,000 synagogues across the United States and more than 500 Jewish day schools which educate hundreds of thousands of K-12 children. We are a nonpartisan charitable organization.

In the year 1790, in his famous letter to the Jewish community of Newport, Rhode Island, President George Washington prayed:

“May the Children of the Stock of Abraham, who dwell in this land, continue to merit and enjoy the goodwill of the other inhabitants; while every one shall sit in safety under his vine and fig tree, and there shall be none to make him afraid.”

Now, in the year 2020, in the United States of America, the Children of Abraham are afraid in a way we have never been before. We are under threat of violence as we walk down a city street or enter our synagogues to pray. Jews have faced such threats for centuries, and still face them today, in Europe and elsewhere around the world. But in the United States, even if there was discrimination against Jews, it was not predominantly of this violent kind. But now it is.

Jews were gunned down at prayer in synagogues in Pittsburgh and Poway and shopping for kosher groceries in Jersey City. Visibly identifiable Jews – Orthodox Jews and Chassidic Jews – have been assaulted on the streets of New York, Miami and elsewhere.

And indeed, it is the most visible Jews – those of us who wear a hat or streimel or kippah, who may have peyos (side-locks) or a long beard – who have been subject most to these physical and verbal assaults. Anxiety about this new reality is present in Orthodox Jewish communities across the United States.

In the American Orthodox Jewish community, there is a widespread belief that this wave of physical attacks are the outgrowth of many years of expressions of not only anti-Semitic bias, but anti-Orthodox Jewish bias in particular that have long gone unreported and un-repudiated.

In recent years, in too many localities around the country, government officials and community leaders have felt comfortable making anti-Orthodox Jewish statements and undertaken anti-Orthodox actions.

In multiple towns in New Jersey – Ocean Township, Jackson and Mahwah – local leaders sought to use zoning and land use regulations to try to prevent Orthodox Jews from moving into their towns. In the course of doing so, those local officials referred to Orthodox Jews as “invading” the community, as “dirty” or as “religious zealots.”[1] It took the intervention of the U.S. Department of Justice[2] or State Attorney General’s office[3] to resolve these disputes.

In Chester, New York – upstate in the Hudson Valley – the town supervisor and leadership have spoken openly about blocking housing developments to prevent Chassidic Jews from moving in saying “if there’s any way for us to choose who could live there, we would.”

In Jersey City, days after the shooting which killed two Orthodox Jews (as well as a police officer and wounded others) a member of the local Board of Education referred to Orthodox Jews as “brutes” who “waved bags of money” and asked if people in the community at large are “brave enough” to explore the “message” the shooters were trying to send. This person still sits on the Jersey City Board of Education.

Finally, in Rockland County, New York – where the Chanukah celebration attack occurred last month – the Rockland County Republican Party released a video advertisement last summer criticizing an incumbent County official who is an Orthodox Jew and supports housing developments that would allow more Orthodox families to move into the area. The video accused the identifiably Orthodox county legislator as “plotting a takeover” of the community that “threatens our way of life.” The video was eventually taken down after a flood of criticism.

These are just a few of many examples and incidents in which Orthodox Jews are portrayed as some “other” – as not part of the American community.

It is important to realize that these offensive incidents targeted at Orthodox Jewry are amplified and accelerated by the broader surge in anti-Semitism we are experiencing in the United States. As the ADL has documented, there was a dramatic increase in anti-Semitic incidents in general and physical assaults upon Jews in particular last year. This too comes in the context of anti-Semitic tropes and slanders being spread by some local and national politicians.

It is in this context – Orthodox Jews being explicitly slandered and Jews generally being subjected to classical anti-Semitic accusations – that visible, recognizable Jews are being targeted for physical assaults and verbal abuse and suffering this reality in an unprecedented way in this great country.

Mr. Chairman, I will conclude these opening remarks by saying that even in the face of all of this, I am not without hope.

The fact that elected leaders from President Trump to Governor Cuomo and Governor Murphy and many others have not only spoken out against this surge of anti-Semitic and anti-Orthodox Jewish attacks – but undertaken concrete actions to have our federal, state and local governments begin to respond and begin to make our communities safer gives me hope.

The fact that you – Congressman Rose and your colleagues – have convened this hearing to confront this problem and look for more effective ways we can stop it and roll it back gives me hope.

And the fact that I, an Orthodox Jew, was able to join with people of many different faiths to serve on the DHS Advisory Committee chaired by General Allen and make recommendations for how our government can protect not only America’s synagogues but also our churches and mosques and temples – this too gives me hope.

I am hopeful that we can all work together to keep the prayer of President Washington the reality for the American Orthodox Jewish community.

To effectuate George Washington’s prayer, I will join to it the prayer of Rabbi Chaim Rottenberg, whose home in Monsey, New York was invaded during Chanukah by a machete wielding anti-Semite. Rabbi Rottenberg delivered the prayer last week in Albany at the Governor’s State of the State Address.

“Merciful G-d, bless us all with the courage to overcome tragedy, heal the wounds of hatred and bless us with solidarity to promote tolerance and brotherhood… among all our communities.”

Chairman Rose, Ranking Member Walker – all Americans must join in this prayer and in this effort. If America slides further into the swamp of anti-Semitism it means our beloved country is losing an essential element of its founding identity – to be a beacon of religious freedom to the world.

I thank you for holding this hearing today and I thank you, in advance, for the actions you will take in the coming days and weeks to protect my community and all communities of faith and thereby protect out nation and fulfill its promise for us all.