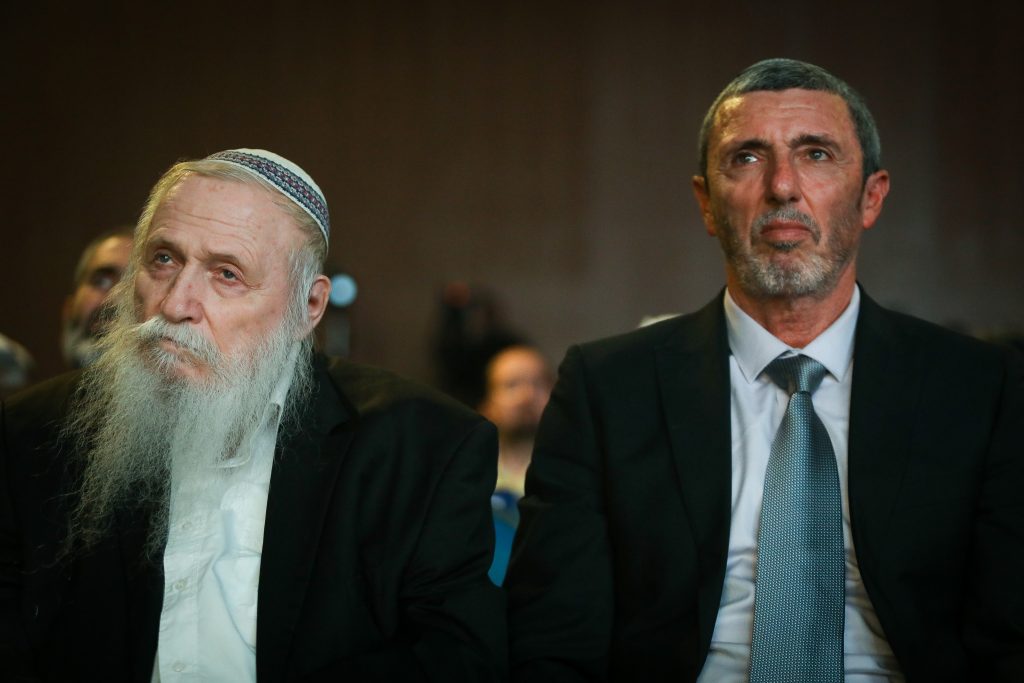 With scant hours to go before final lists must be submitted to the Central Elections Committee, Prime Minister Binyamin Netanyahu has been feverishly working to unify all parties to the right of the Likud in order to ensure that no votes are lost – but so far in vain. Reports Wednesday morning said that Netanyahu has tried several tacts, including personally appealing to Naftali Bennett, Rafi Peretz and Betzalel Smotrich to put their differences aside and join together, at least in a “technical bloc” that will break up after the election.

Among other things, Netanyahu reportedly spoke overnight Tuesday with Rabbi Chaim Druckman, acknowledged as the spiritual leader of the Religious Zionist movement. Netanyahu appealed to him to take the leadership of Jewish Home from Peretz, thereby eliminating the personality issues between him and Smotrich that have made coming to an agreement nearly impossible. Rabbi Druckman reportedly turned Netanyahu down, but said he would do what he could to ensure that Jewish Home passes the electoral threshold. Netanyahu reportedly also spoke with popular media personality Shimon Riklin, but the latter turned down the offer of placement on the Jewish Home list.

Meanwhile, the pressure is on Peretz to join Bennett and Smotrich on the New Right list, after Smotrich signed a deal with Bennett Tuesday. That pressure is coming from within Jewish Home, from among the many activists and party members who were opposed to the deal that brought Itamar Ben-Gvir’s Otzma Yehudit list into Jewish Home. That deal was signed several weeks ago, and is seen as a major reason for why Smotrich gave up on making a deal with Jewish Home, as the National Union leader does not think much of Ben-Gvir.

Jewish Home party loyalists on Wednesday were inundating Peretz with demands that he make a deal with Bennett – even if that means he will not lead the unified party. “I cannot see how we pass the electoral threshold,” said Rafi Terbelsi, a Jewish Home member of the Teveria city council. “This is not the time to be right, it is the time to be smart.” Maale Adumim council member Eyal Fishler was quoted by Channel 20 as saying that “after Smotrich signed his deal, it is too dangerous for us to run alone with Otzma Yehudit. We have no choice, we have to try and get something out of Bennett and make a deal with him, and if that means giving up on Ben-Gvir, so be it.”

Smotrich’s deal with the New Right came hours after Smotrich said earlier Tuesday that efforts to integrate his list with Jewish Home had failed. Differences remain between Peretz and Smotrich, mostly on how the joint list will appear and who will lead it. Peretz insists on retaining leadership of the list, while Smotrich prefers party primaries. Smotrich will be number three on the New Right list, after Naftali Bennett and Ayelet Shaked.

In their first response to the development, Peretz and Ben-Gvir said in a statement that “the true faces [of Bennett and Smotrich] have been revealed. They are destroying Religious Zionism. We called for unity from the beginning, but they preferred to divide the voting public, and are thus damaging the entire right. Smotrich all along wanted open primaries, but all of a sudden this does not interest him anymore. All that interests him is the ministerial seat he thinks he is going to get with the New Right. We will inform the public on our next steps in the near future.”