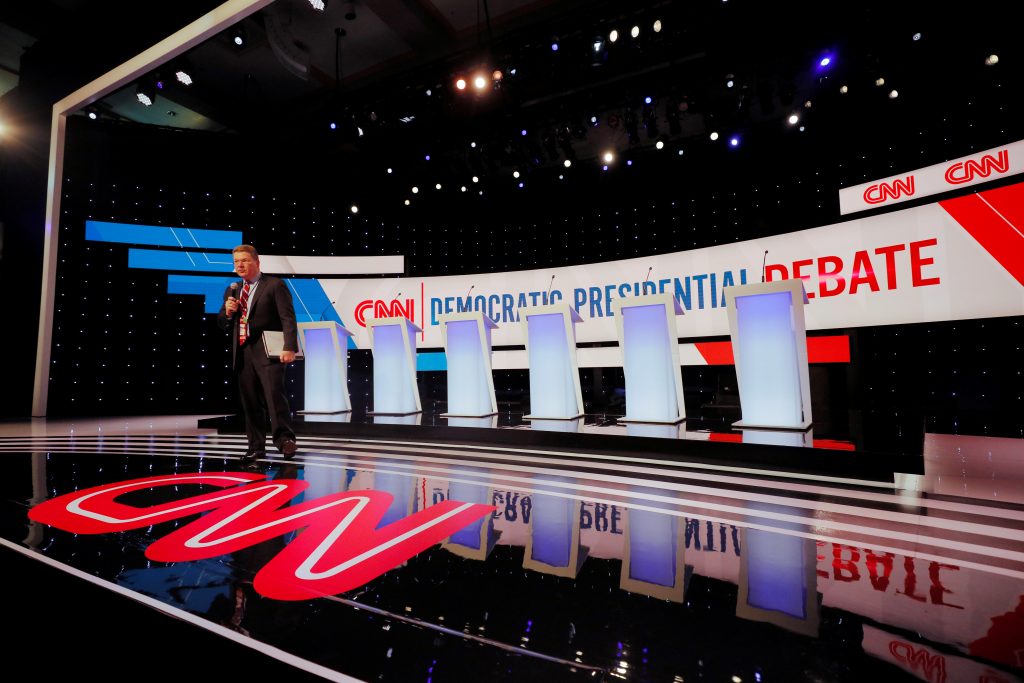 Six Democratic presidential candidates sparred over war and trade, gender and health care, in a pressure-packed debate in Des Moines, Iowa, on Tuesday, with the first nominating contest in the state less than three weeks away.

Here is how each of them fared:

The former vice president, who has been showing fresh signs of competitiveness in Iowa and New Hampshire, and who still leads in polls nationally, needed only a steady performance on the evening and largely delivered it.

He benefited from much of the attention staying on the flap between progressive allies Bernie Sanders and Elizabeth Warren over whether he once told her a woman could not win the White House in 2020, which allowed Biden to stay above the fray.

When Sanders did turn his attention to Biden, it was regarding issues that have long been part of Biden’s record: his vote as a senator in favor of the Iraq war and his support for global trade deals such as the North American Free Trade Agreement.

Beyond Sanders, Biden was hardly challenged, even by other moderates such as Pete Buttigieg and Amy Klobuchar, who may have the most to gain from him faltering.

Coming into the debate, Sanders’s campaign had been rocked first by reports that his volunteers had denigrated Warren to Iowa voters and then by another report that he had told Warren that a woman could not be elected to be president in 2020.

When the senator from Vermont was asked by a debate moderator whether he indeed made the remark to Warren, he forcefully denied it. But Warren insisted he had, essentially accusing Sanders of lying.

The tension between the two was palpable – as were the conflicts between their supporters on social media.

The main question for Sanders going forward is whether the row with Warren slows some of the momentum his campaign had been building at a time when progressive and moderate Democrats alike want less intra-party fighting and more of a united front against their common enemy – Republican President Donald Trump.

Bottom line: Sanders may face questions about his appeal to female voters.

Did Warren get the better of the exchange with Sanders over gender? Likely. She attempted to take the high road and not dwell on what he may or may not have said.

Still, in a thinly veiled case against the most unapologetically liberal candidate in the race, Warren said there was a “real danger” in Democrats “picking a candidate who can’t pull our party together or someone who takes for granted big parts of the Democratic constituency.”

She said, “We need a candidate who will excite all parts of the Democratic Party, bring everyone in.”

There is also no mistaking that her campaign, whether it intended to or not, has now put gender front and center in a way it had not before.

Warren explicitly made the case that women, in fact, make for better candidates than men. “Look at the men on this stage,” she said. “Collectively, they have lost 10 elections.”

Bottom line: Warren is making a high-stakes bet on gender.

In a different debate, the 37-year-old former mayor of South Bend, Indiana, might have been the top target of the evening. He has surprised – and at times annoyed – his rivals with his staying power. Polls show him a major player in both Iowa and New Hampshire, the two early voting states.

His lack of political experience and his lack of support from voters of color remain significant weaknesses, but both went largely unremarked upon on Tuesday. At one point, Klobuchar was given an opportunity to take a shot at Buttigieg’s record and let it pass.

For his part, Buttigieg did what he has done at most debates: provide solid, if slightly wonky, answers to every question. He, more than anyone in the race, may benefit from being able to campaign while the U.S. senators in the race return to Washington for Trump’s impeachment trial.

Bottom line: Buttigieg got a pass.

The senator from Minnesota likely needed a dominating performance on Tuesday to gain some real traction in the race. Polls show her still trailing behind the top grouping of candidates in Iowa, where she must perform well to remain a viable candidate.

To that end, Klobuchar, more than any other candidate on stage, repeatedly turned the conversation back toward Trump’s presidency. When she did focus on the rivals, she, as she has done before, effectively delivered a critique against the progressive agenda of Sanders and Warren.

But time is running out for Klobuchar, and she’ll have to spend much of her time off the campaign trail and back in Washington for the upcoming impeachment trial.

Bottom line: A strong night, but likely not enough.

The billionaire from California was a last-minute qualifier for the debate and largely remained an afterthought throughout the evening, failing to make a case why he would make a better Democratic nominee than the other candidates on stage.

He was able to continually bring up his number-one issue, climate change.

His willingness to spend millions of his own dollars on his campaign, however, means that he could end up playing a spoiler role later in the race. He has shown surprising strength in polls of the early voting states Nevada and South Carolina.