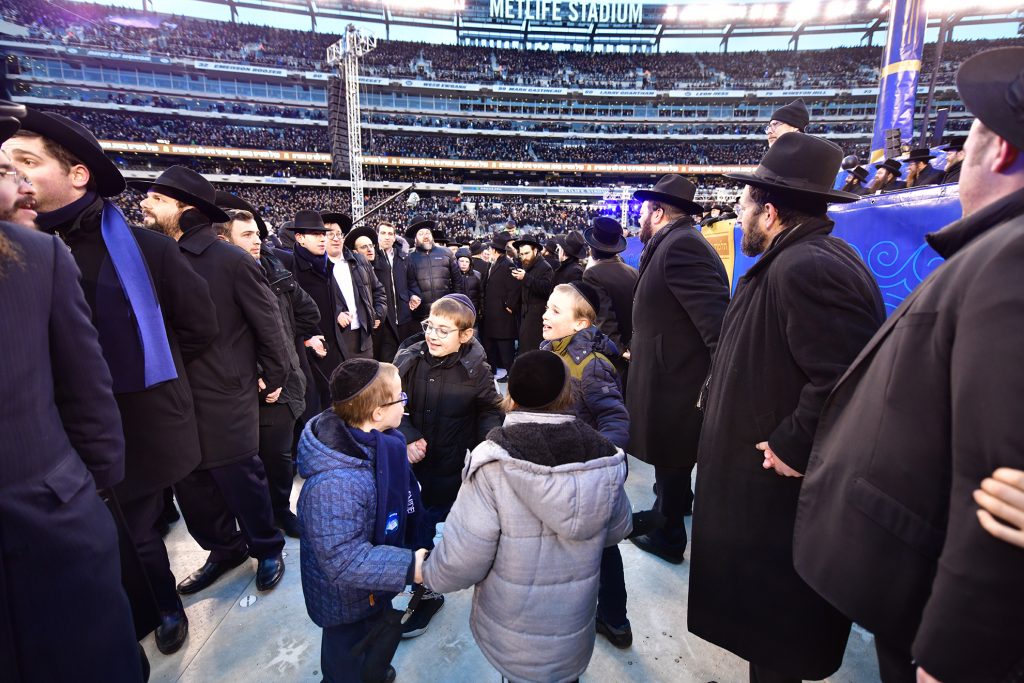 With the help of Hashem, more than 90,000 of us gathered at MetLife Stadium and at Barclays Center to be mekadesh Shem Shamayim.

There were more than 90,000 openly observant and clearly recognizable Jews — of all stripes and colors — men, women and children who smiled, said “thank you” and acted as true Children of Hashem as they interacted with people of all races and colors.

The law-enforcement personnel who provided security were effusive in their praise of the Bnei Avrohom, Yitzchok and Yaakov, as were all the ushers, workers and other staff of MetLife Stadium.

Therefore, it behooves us — we as Jews about whom the Mishnah says, “Beloved are Israel, for they are called children of Hashem” — not to allow the momentum of last Wednesday’s events to remain just a memory to wax nostalgic about.

Rather, just as at the moment we conclude Shas we begin Shas anew, so too with regard to our middos and our ability to be mekadesh Hashem, we have to continue to go from strength to strength.

Many of us recall the Eighth Siyum HaShas, which was held Sunday, November 14, 1982, in New York’s Felt Forum.

Many of us will no doubt recall how the Sanz-Klausenburg Rebbe exhorted all of those present that for the ninth cycle, the Daf should be studied with Tosafos as well as Rashi.

To the amazement of all those present, when Harav Yaakov Kamenetsky approached the podium, he announced, “The words of the Klausenburger Rav are emes! I, too, will now begin to study the Daf with Tosafos.”

The lesson we can glean from these two giants of Torah is that we should never become stagnant or static about our Torah and our mitzvos. Rather, we must continually strive for greater and greater heights.

When we all made sure to recognize the tzelem Elokim in our fellow human beings by acting civilly and politely, we were making a tremendous kiddush Hashem.

However, we must not rest on our laurels.

We must continue to grow and now act properly to all, not only with “just” Rashi — we must now do our mitzvos with Tosafos as well!

We must smile when we see someone created in the image of Hashem.

We must create a constant cadre of kiddush Hashem ambassadors.

We must excel, as the Jewish people have always done, in being the true ohr lagoyim, to be an example of proper behavior for all.

By acting civilly, by continuing that which we started at the Siyum HaShas — namely to say “good morning,” to smile and to say “thank you,” and to extend this behavior to our daily lives, we are mekadesh Shem Shamayim.

Particularly in our times, when Esav has lifted his hand, it is incumbent upon Yaakov to make his kol — his voice — heard loud and clear.

We may not be able to always deflect the dangerous arrows of Esav; however, we should never allow the corrupted behavior of Esav to be adopted by the Bnei Yaakov.

Just as we begin Shas anew, with renewed vigor, so too each day gives us its own unique opportunity to prove to all that we are worthy of being called banim laMakom, children of Hashem.