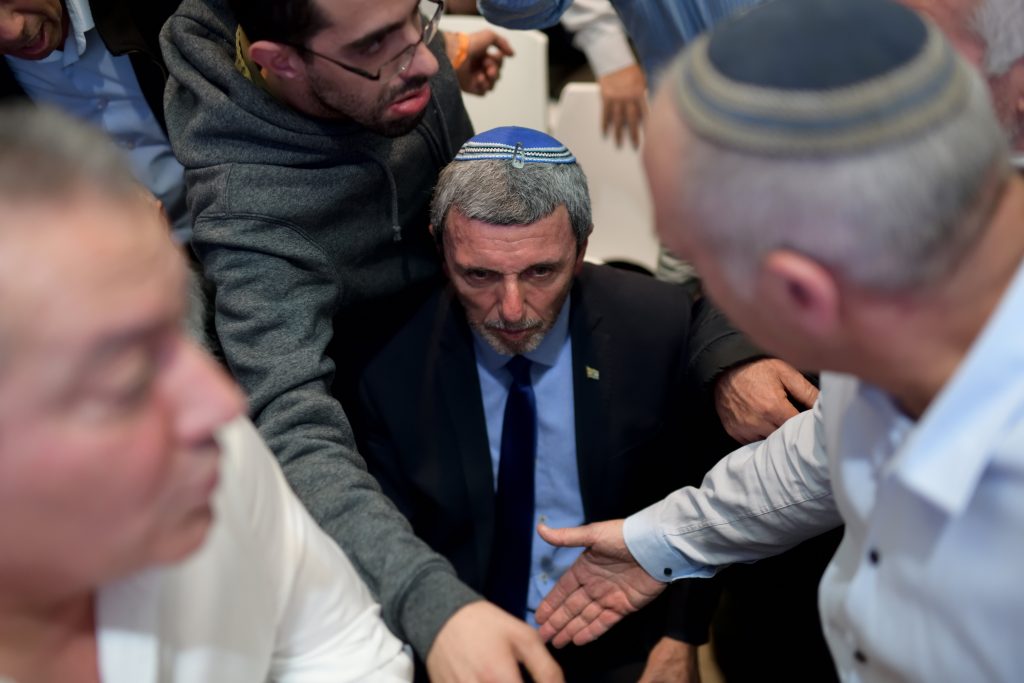 A day before the final party lists need to be submitted to the Central Elections Committee, the prospect of a unified party on the religious right appeared more distant than ever.

After a shoving match at a meeting of the Jewish Home’s central committee Monday night, the National Union said in a statement Tuesday that “the basis of unification between Jewish Home and National Union has been upended, after Jewish Home did not ratify the deal, as was promised by party head Rabbi Rafi Peretz.”

Sources in both parties told Arutz Sheva Tuesday that an agreement on a joint run “is not on the horizon.” Differences remain between Peretz and National Union head Betzalel Smotrich, mostly on how the joint list will appear and who will lead it. Peretz insists on retaining leadership of the list, while Smotrich prefers party primaries. The National Union will hold its own meeting Tuesday night, in which it will decide on its political future.

Trouble ensued at the Jewish Home meeting Monday night, when Peretz took the microphone amid loud grumbling from party members who demanded a united list. Shoving matches broke out between factions supporting Peretz and those in favor of primaries. The National Union said in its statement Tuesday that regardless of what happened, Smotrich will continue to work to unify the party.

But speaking to Arutz Sheva, a Jewish Home source said that “Smotrich is playing games with us. After the meeting Monday night both he and Peretz were supposed to meet with Rabbi Chaim Druckman,” a senior Rabbi in the Religious Zionist movement, “to finalize the deal, but Smotrich ducked out. We agreed to everything he asked for, there are no gaps between us. Apparently he got an offer he couldn’t refuse from the New Right,” the source said.

Naftali Bennett and Ayelet Shaked of the New Right were invited to the meeting as well, but declined, announcing that they had made a final decision on running separately.

“We have important news for the Religious Zionist and liberal right voters,” Bennett said in a statement. “The New Right is running on its own. We are the right that will unify everyone. We are the right that already have and will continue to bring results in the legal sphere, security, the economy and national values,” said Bennett, adding “we call on all right-wing voters, especially those who felt compelled to vote for Blue and White, Liberman, or those who stayed home, to join us. You have a home here. Come home and vote for the New Right.”