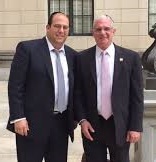 Only weeks after violent attacks on Jews shook the metropolitan area, both houses of New Jersey’s legislature overwhelmingly approved two bills aimed at protecting communities against threats and bolstering law enforcement’s ability to prevent them from occurring. Once bill doubled the state’s appropriation for nonprofit security grants from $1 million to $2 million for the coming year and the second created a statutory designation for “domestic terrorism.”

Assemblyman Gary Schear (D-Passaic), who was a leading sponsor of both bills, told Hamodia that high-profile attacks in Jersey City and Monsey made it relatively easy to garner broad support for the measures.

“Unfortunately, with the threats we are increasingly facing, it was not a heavy lift to get the Senate and Assembly leaders as well as the Governor on board with these bills, as it seemed pretty apparent how necessary they are,” he said. “New Jersey is ahead of the game on a few of these issues, and we hope to keep moving in the right direction.”

Last year, in the wake of the shooting at the Tree of Life Congregation in Pittsburgh, Pennsylvania, New Jersey passed a law that opened its Non-Profit Security Grant Program (NPGS) to houses of worship and allotted $1 million for qualifying locations deemed to be at risk of attacks. The law allows for the awarding of grants up to $50,000 for organizations to acquire target hardening equipment such as cameras and barriers. An additional $10,000 can be awarded to fund security personnel at certain times of the year viewed as being more vulnerable to attacks.

Assemblyman Schear had been working on raising funding to $3 million. A proposal from Senator Joseph Cryan (D-Union) doubled the allocation to $2 million, which was accepted by the legislature’s leadership.

“One million more dollars will dramatically assist local religious and cultural intuitions in terms of target hardening,” said Assemblyman Schear. “Really much more is needed, but this is an excellent next step to take and I hope that we can steadily increase it.”

The funding closely mirrors federal NPGS program which was introduced in the wake of the September 11 attacks. It has rapidly multiplied in recent years and in December, Congress approved $90 million for the 2020 budget. In light of recent threats against faith communities, particularly Jewish institutions, Senator Charles Schumer (D-NY) has proposed quadrupling the level to $360 million – a call that was quickly seconded by New Jersey’s Senators, Robert Menendez and Cory Booker.

The bill has been a lobbying priority of the Agudath Israel of America, which issued a statement welcoming its passage.

“Doubling the amounts of funds available in the grant program ensures that even more New Jersey nonprofits, including synagogues, private schools and community centers will be able to receive the much-needed funds,” read the statement in part.

The bill creating a designation of domestic terrorism opens additional options for state law enforcement to get warrants and investigate suspected attacks in the planning stages. It will also stiffen sentencing for those convicted of involvement in such acts.

As mass shootings and other targeted acts of violence have risen, many have called for a similar law to be enacted on the federal level as well, because law enforcement officials say present guidelines still have too many hindrances blocking the investigation of such threats.

New York is presently considering a similar law. The present bill in New Jersey was drafted in conjunction with the state’s Attorney General, Gurbir Grewal.

“The domestic terrorism bill is fundamentally necessary to address acts intended to scare entire communities,” said Assemblyman Schear. “Unfortunately, it cannot prevent all attacks, but we hope it will make more of these subhuman creatures who commit them think twice about what they plan to do.”

Monday was the last day of the state legislature’s two-year session, and bills were passed, together with many other pieces of legislation that had not yet been addressed. Both bills have won the support of Governor Phil Murphy, who is expected to sign them into law in the near future.