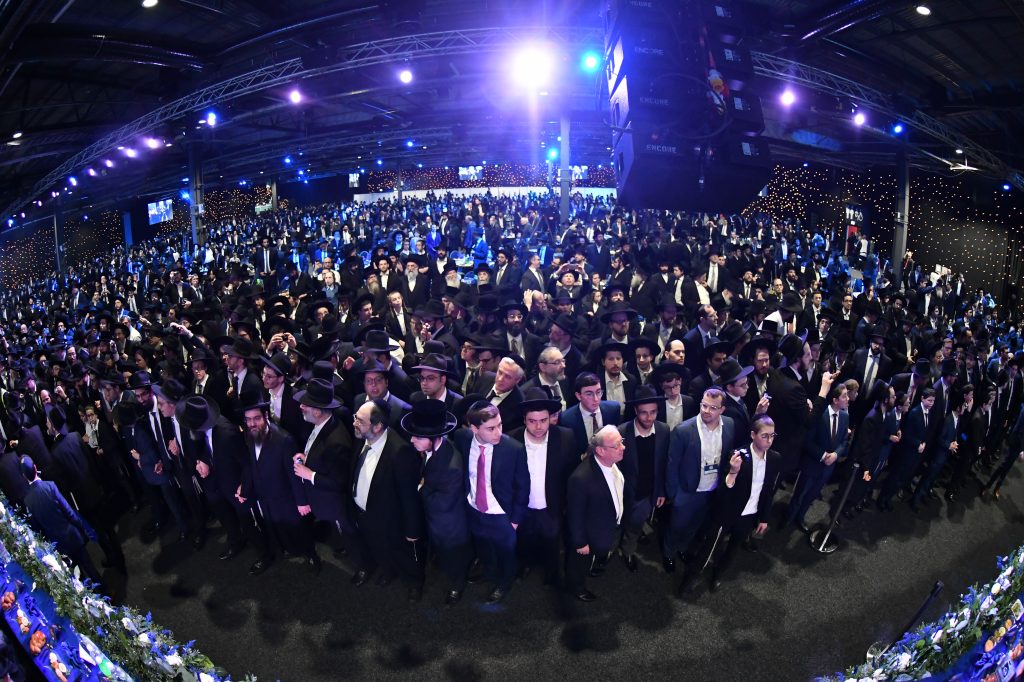 From the moment when Harav Pinchos Schneebalg, shlita, Rosh Yeshivas Viznitz-London welcomed the guests, until the final burst of dancing at the end of the evening, the entire event ran smoothly and on time, uniting all the guests, those who were personally mesayem and those who did not, in a tremendous display of achdus and kavod haTorah.

Harav Yisroel Friedman, Rav of the Chortkov Kloiz-Manchester, began the next cycle with the first page of Maseches Brachos. Harav Friedman humbly shared the honor with everyone present, as he said that we are all able to become maschilim beginning the next cycle.

Rabbi Dovid Hofstedter, Nasi of Dirshu, praised the “wonderful community of Manchester that has come together to celebrate in achdus.” Stressing the importance of immersion in learning, Rabbi Hofstedter said, “A Dirshu Yid does not just say the Daf or learn the Daf – he lives the Daf!”

The next speaker was Harav Simcha Bamberger, shlita, who has delivered a unique Daf Yomi shiur for 45 years. Rav Simcha is world famous for the depth and clarity of his shiurim, delivered in his inimitable style. He described attending this siyum as being present at a contemporary matan Torah.

The distinguished guest speaker was Harav Aharon Schiff, shlita, Rav of Antwerp, Belgium. In his inspiring divrei chizuk, Harav Schiff warned that the only way to pass on our love of Torah to the next generation is to demonstrate tangibly the enjoyment that we derive from learning Torah. In the enlightening words of the Mabit, learning Torah without feeling any enjoyment or benefit is not considered proper talmud Torah. Conversely, seeing the positive dedication of a father when he learns the Daf and being present at the beautiful siyum afterwards leaves a lasting impact on our children.

At the end of the Siyum, presentations were made to some of the hardworking Manchester committee members. Although much of the arrangements were made by the Dirshu team who flew in from Eretz Yisrael, the Siyum would not have been possible without the input of Manchester askanim. The well-deserved presentations were made to Baruch Meir Bamberger, Yanky Silber, and Chanoch Greenblatt. The bentching was led by Rabbi Yechiel Emanuel.