National Pelosi: ‘I Know Exactly When’ to Send Impeachment to Senate
National 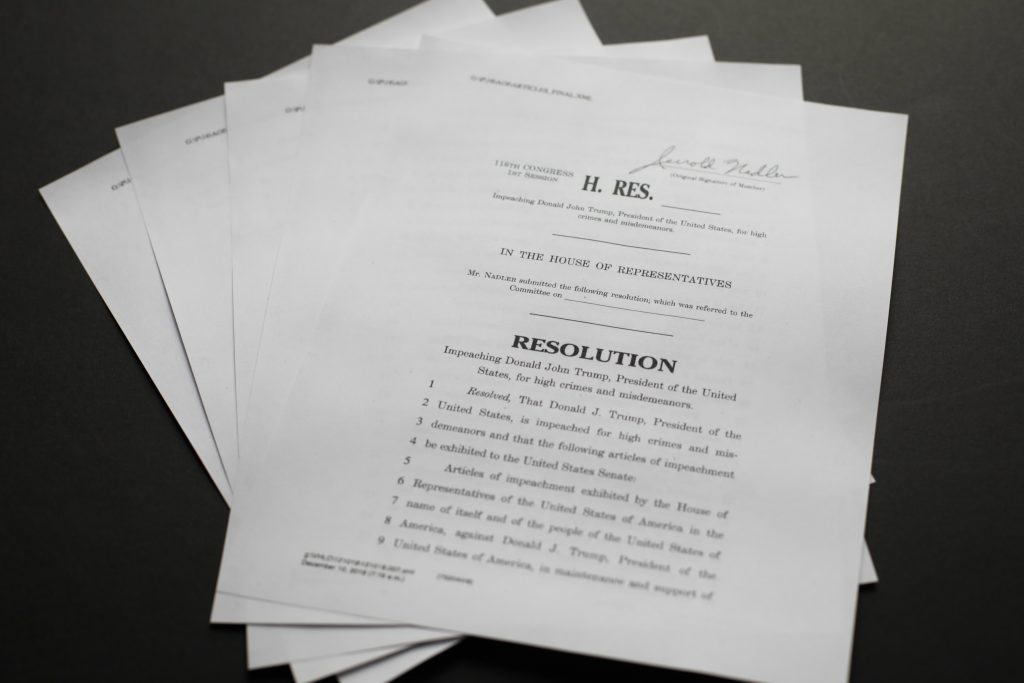 House Speaker Nancy Pelosi said Thursday she knows ‘’exactly when” she’ll be transmitting the articles of impeachment against President Donald Trump, brushing back Democratic comments that the time has come to start the Senate trial.

Pelosi told reporters at the Capitol she had no concerns about the anxiety some House and Senate Democrats are showing over the standoff with Senate Majority Leader Mitch McConnell about the terms of the delayed trial. It’s now more than three weeks since the House impeached Trump on charges of abuse and obstruction.

“Same thing I’ve said before,” Pelosi told The Associated Press as she entered the Capitol. “We’d like to see how we’re going to proceed, and then we’ll know who to send. I have an obligation to my members, especially those on the committees, to do justice to their work.”

Asked later as she headed for a morning meeting if she had any concerns about losing support from Democrats for her strategy, she said: “No.”

Pelosi told reporters, “I know exactly when” she plans to send the impeachment articles over, but, “I won’t be telling you right now.”

The standoff over Trump’s impeachment trial deepened this week as McConnell said there will be “no haggling” with Democrats as Pelosi demands for more details and witnesses.

McConnell’s Senate majority has the leverage Republicans need to launch Trump’s trial toward swift acquittal of the charges, but Pelosi’s reluctance to transmit the articles of impeachment leaves the proceedings at a standstill.

What started as a seemingly minor delay over process and procedures is now a high-stakes showdown between two skilled leaders facing off over the rare impeachment trial, only the third in the nation’s history.

“There will be no haggling with the House over Senate procedure,” McConnell, R-Ky., said Wednesday before meeting with Trump at the White House. “We will not cede our authority to try this impeachment. The House Democrats’ turn is over.”

Trump tweeted Thursday that “Pelosi doesn’t want to hand over The Articles of Impeachment, which were fraudulently produced by corrupt politicians like Shifty Schiff in the first place, because after all of these years of investigations and persecution, they show no crimes and are a joke and a scam!” Rep. Adam Schiff, D-Calif., led the House impeachment inquiry.

Three weeks have passed since the House impeached Trump on the charge that he abused the power of his office by pressuring Ukraine’s new leader to investigate Democrats, using as leverage $400 million in military assistance for the U.S. ally as it counters Russia at its border. Trump insists he did nothing wrong, but his defiance of the House Democrats’ investigation led to an additional charge of obstruction of Congress.

Senators from both sides are eager to serve as jurors for Trump’s day in court. The trial will be conducted in the Senate, where Republicans have a thin majority.

The impeachment timeline is complicating the political calendar, with the weekslong trial now expected to bump into presidential primaries. Several Democratic senators are running for the party nomination.

Returning to Washington from the campaign trail, Sen. Elizabeth Warren, D-Mass., told reporters she was confident in Pelosi’s plan.

“I have no doubt that she will get this right,” Warren said. ”Some things are more important than politics, and the impeachment of a president is certainly one of those. No one is above the law, not even the president.”

The showdown is expected to be resolved this week, lawmakers said.

Pelosi wants McConnell to “immediately” make public the details of his trial proposal, according to a letter to colleagues. She wants to know how much time will be devoted to the trial and other details about the “arena” before announcing her choice of House managers to try the case in the Senate, according to Democrats familiar with the situation and granted anonymity to discuss it.

“Sadly, Leader McConnell has made clear that his loyalty is to the President and not the Constitution,” Pelosi wrote to colleagues late Tuesday. She said the process he is outlining is “unfair.”

The confrontation over a Senate trial had been building for weeks. But McConnell gained ground when he announced Tuesday that he has support from the majority of senators to start a trial structured like the last one, against President Bill Clinton in 1999. Those proceedings also began without an agreement on witnesses.

It takes 51 votes for agreement on the trial proceedings, and with Republicans holding a 53-47 Senate majority McConnell has a slight advantage if he can hold GOP senators together. Democrats are trying to peel off support from a few Republicans to support their demands.

McConnell, who has resisted calling new witnesses, expects a speedy trial that will end with Trump acquitted of the charges. He complained about Pelosi’s “endless appetite for these cynical games” and said it will be up to senators to decide if they want more testimony.

On the Senate floor Wednesday, Democratic leader Chuck Schumer promised he would force votes on witnesses, requiring senators to choose whether they want to hear from Trump’s former national security adviser John Bolton and others.

“When the Senate has votes on witnesses and documents, my Republican colleagues will have to answer to not just the president,” Schumer said. “The American people do not want a cover-up.”

Some Senate Democrats have said the time has come for Pelosi to send the articles so the trial can begin. Pelosi has yet to choose House impeachment managers for the trial, a politically sensitive next step with many lawmakers vying to be candidates. But aides downplayed any riff between the leaders, saying senators are simply eager to have their say on Trump’s impeachment.

Pelosi told House leaders in a private meeting Tuesday that she believed the decision to delay the articles was working as a strategy to apply pressure on the Senate for a more fulsome trial, according to those in that meeting.

Republicans countered that Democrats rushed to impeach and then delayed the process.