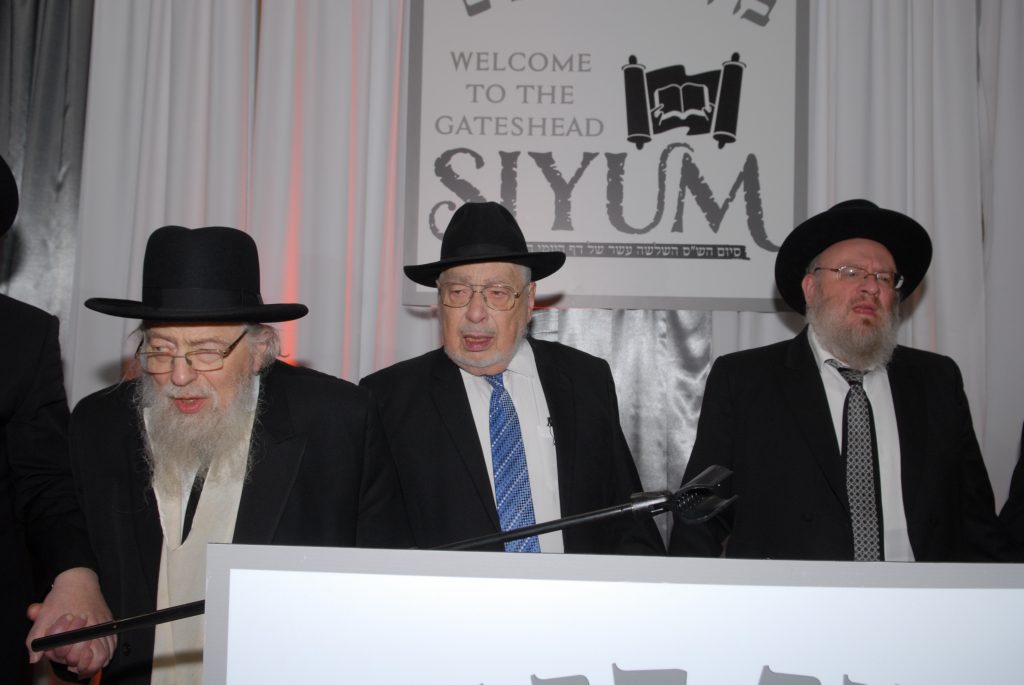 The Gateshead kehillah event to celebrate the Siyum Hashas of the Daf Yomi cycle was held last Motzaei Shabbos in the Bewick Center, under the leadership of Mr. Menachem Schleider and his committee.

Held in the presence of The Gateshead Rav, Harav Shraga Feivel Zimmerman, shlita, and the Rosh Yeshiva, Harav Avrohom Gurwicz, shlita, the siyum, catered by the ladies’ catering committee, was sponsored by Mr. Dovid Gurwicz in the memory of his late wife Mrs. Naomi Gurwicz, a”h.

Following Tehillim, the final words of Shas Bavli were read by Mr. Gurwicz, following which the kaddish was recited by his two sons, Rabbi Shimon of North West London and Rabbi Tzvi of Manchester, before the hall broke out in a rekidah to musical accompaniment.

Commencing the new cycle, Rabbi Avrohom Yaakov Schechter, the senior local Daf Yomi maggid shiur, began by expressing his gratitude, singling out his deputy maggid shiur, Rabbi Rafael Salzer, as well as the wives of participants who enable and encourage their husbands to learn.

Harav Zimmerman, spoke of the two-fold obligation to not only learn Torah, but to have fixed times of day when this must take place come what may, even where one may miss the opportunity to make a profit.

The guest speaker was Rabbi Yehuda Leib Wittler, Rosh Yeshiva of Shaarei Orah, Manchester, whose theme was the Vilna Gaon’s description of the pivotal role played by the dual concepts of “sasson” and “simchah” in our avodas Hashem. Simchah, he said, is the excitement and anticipation of starting a new project, while sasson is the satisfaction of bringing it to its completion.

Presentations were made to the three Gateshead maggidei shiur – Rabbi Schechter, Rabbi Mordechai Chody and Rabbi Yossef Shlomo Kahn – in gratitude for their hours of preparation.

The evening was interspersed by the harmonious singing of Buchi Gluck and the Sameach choir, accompanied by Mr Zally Fordsham on keyboard.