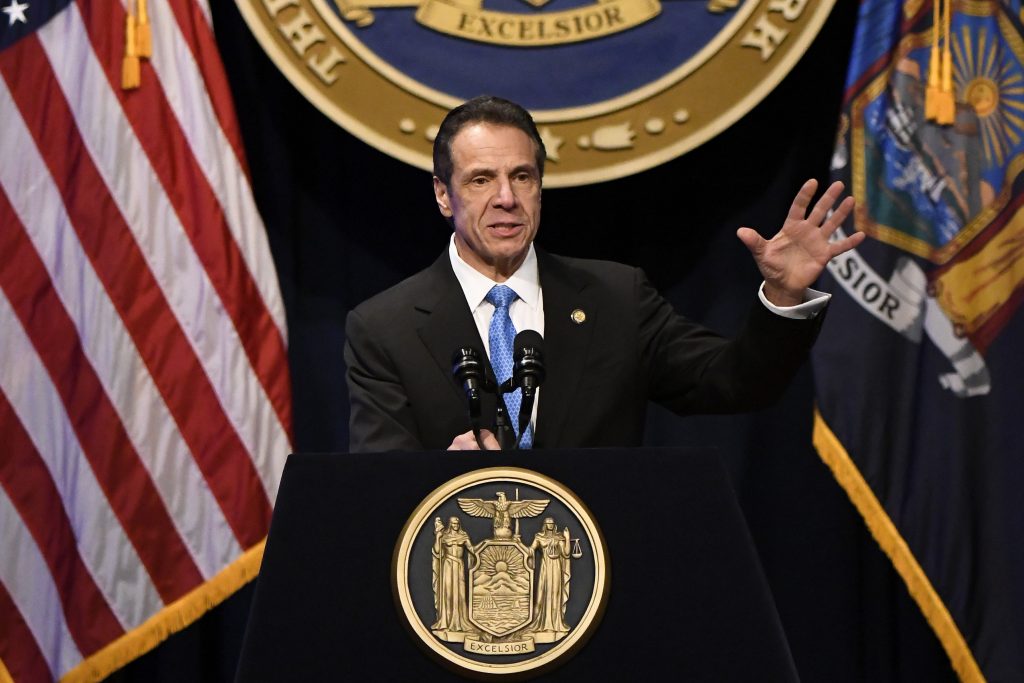 The third-term Democrat touted past achievements and trumpeted a long list of policy initiatives, many of which he previewed in a series of announcements over the past month. Cuomo also stressed the need for fiscal restraint, with the state staring at a $6 billion budget gap, caused largely by soaring Medicaid spending.

“New York at her best is the progressive capitol of the nation, and we must fulfill that destiny again this year,” Cuomo said.

Cuomo delivered his address at the Empire State Plaza Convention Center in downtown Albany to an audience of members of the Legislature and top politicians from around the state. The speech kicked off a legislative session running through June 2.

The governor’s address comes after several episodes of violence targeting Jewish people, including an attack by a man who stormed inside the home of a Monsey Rabbi Chaim Rottenberg, and stabbed five people at a Chanukah celebration.

Rabbi Rottenberg delivered a blessing before Cuomo’s address and called for tolerance.

Cuomo is proposing a new law targeted at domestic terrorism and said New York would be the first state in the U.S. to enact such legislation. The new law would apply to crimes in which at least one person died and victims were targeted by their race, religion and gender, among other topics.

Cuomo called the attack “intolerable” and pledged the state won’t stand for it. “They attacked me, and they attacked you,” Cuomo said.

“These are the times, my friends, when New York state is called upon to lead to set a course for a troubled nation searching its way through the fog of confusion,” he said.

In a policy briefing book that accompanied his speech, Cuomo said his proposal to legalize marijuana would limit the sale of cannabis products to adults over age 21. But he only briefly mentioned his legalization proposal in his address Wednesday, to tepid applause.

A similar proposal to legalize recreational marijuana failed last year among disagreements over funding and hesitation from suburban Democrats. Lawmakers instead scaled back penalties for possession of small amounts of marijuana and created a process for expungement.

Cuomo has declared “Making Progress Happen” as his slogan for 2020. But any progress will have to come while the state is grappling with a budget gap fueled by soaring Medicaid costs. Debate over how to handle the shortfall is expected to color virtually every policy debate this year.

Cuomo called climate change the “transcendent threat of our times” and proposed sending voters a $3 billion bond in November to fund a flood reduction and habitat restoration program he is calling Restore Mother Nature.

Cuomo has yet to share many details about his plans to address soaring costs of the Medicaid program, which serves over 6 million people.

The governor called Wednesday for improved accountability in the Medicaid system, saying safeguards were needed to limit potential overspending on the program by municipalities.

More details of how the administration plans to address the funding gap may have to wait for his budget proposal, expected in mid-January.

Cuomo has cautioned against overspending while pledging not to raise taxes. That budget-conscious message could clash with more left-leaning lawmakers and advocates who want to balance the budget with new taxes on the wealthy.

The governor’s party has seen big political wins in recent years, even as some long-time Democratic incumbents have lost to more left-wing challengers. But Cuomo argued Wednesday true progressive politics must be grounded in “reality” and champion results over rhetoric.

Republicans, who have seen their clout diminish in Albany, say they will hold down spending and resist new taxes.

Republican leaders including state GOP chairman Nick Langworthy criticized the governor for failing to address the budget deficit as well as a mounting debate over bail reforms enacted last year. Cuomo and other Democrats have signaled they are open to making changes to the statute.

In his preview announcements over the past month, Cuomo has released proposals to ban untraceable guns, study high speed rail, and require the use of American-made steel and iron on infrastructure projects among other initiatives.