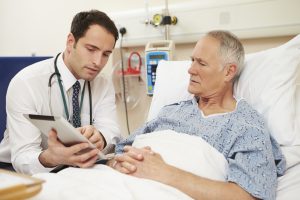 The cancer death rate in the U.S. fell by the most on record as advances in treatments for lung tumors like video-assisted surgery helped prolong the lives of patients.

The mortality rate from cancer has been gradually declining for 26 years, thanks in large part to fewer people smoking cigarettes. But from 2016 to 2017, the most recent period available, it dropped by 2.2%, the most ever in a single year, according to a report released Wednesday by the American Cancer Society. That compares with an average 1.5% yearly decline over the decade.

The drop translates to roughly 2.9 million fewer cancer deaths than would have occurred had mortality rates remained at their peak. For lung cancer specifically, the mortality rate declined 4.3% annually from 2013 to 2017.

“It is really lung cancer that is driving this,” said Rebecca Siegel, scientific director of surveillance research at the American Cancer Society, and lead author on the new study. “We found increases in survival for lung cancer at every stage in diagnosis.”

She attributed the lower deaths to improvements in treatments, including video-assisted surgery that enables more patients with early lung tumors to become eligible for operations; more precise radiation treatment; and better scanning technology that allows doctors to better assess the stage of tumor, so the patient gets the best treatment right away. At later stages of illness, new, targeted drugs that aim at specific disease-causing genes are helping patients whose tumors have those genetic flaws.

Lung cancer still kills far more people than any other tumor. It will cause more than 135,000 deaths this year, roughly 22% of all cancer fatalities, the American Cancer Society estimates.

There’s the potential for more progress in future reports. That’s because the latest death-rate statistics go only through 2017, and likely don’t include the potential impact in lung cancer mortality from immune-therapy drugs such as Keytruda from Merck & Co. and Opdivo from Bristol-Myers Squibb Co. Those type of drugs have led to rapid improvements in melanoma death rates, but they became widely used in lung cancer only in the past few years.

The report, based on U.S. government data, isn’t all good news. Prostate cancer death rates have leveled off recently after a period of decline. That may be because many doctors pulled back on using the controversial prostate-specific antigen test, or PSA, which can spot the disease but can lead to over-treatment of men who may never have died from their tumors, Siegel said.

“Though it was definitely causing harm, it was also contributing to declines in mortality,” Siegel said. What’s needed now is better screening tests to detect only the prostate cancers that will go on to cause harm.

Population mortality rates are considered one of the most reliable ways of measuring progress in cancer treatment and prevention. By contrast, cancer survival rates can sometimes be influenced by improvements in diagnosing tiny, early stage tumors that wouldn’t necessarily be deadly.

The results are being published in CA: A Cancer Journal for Clinicians.