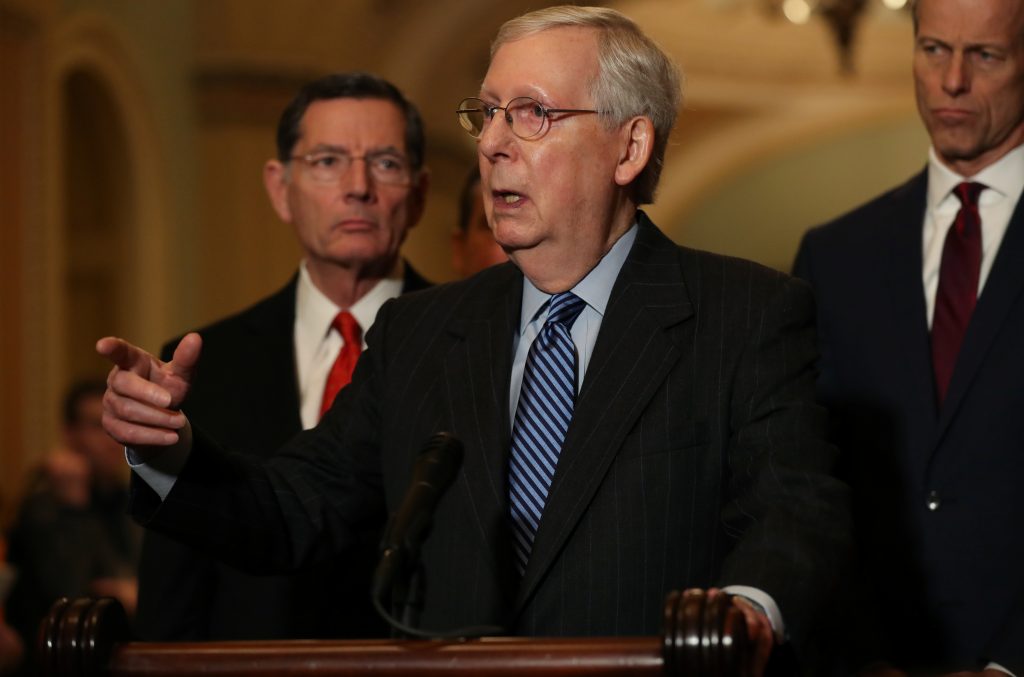 Senate Majority Leader Mitch McConnell told Republican senators Tuesday that he is prepared to proceed with President Donald Trump’s impeachment trial with no agreement with Democrats on witnesses, according to two officials familiar with his comments.

The announcement came as House Speaker Nancy Pelosi, D-Calif., faced increasing pressure to send the two articles of impeachment – abuse of power and obstruction of Congress – to the Senate to allow a trial to begin. Pelosi has held on to the documents as Democrats seek guarantees about the scope of a trial, including witnesses.

The crux of the Democrats’ case is the allegation that President Trump tried to leverage a White House meeting and military aid, sought by Ukraine to combat Russian military aggression, to pressure Ukrainian President Volodymyr Zelensky to launch an investigation of former vice president Joe Biden and his son Hunter Biden, as well as a probe of an unfounded theory that Kyiv conspired with Democrats to interfere in the 2016 presidential election.

McConnell, R-Ky., said he has the minimum of 51 votes to begin the trial in the format that he has long envisioned: opening arguments for both the House impeachment managers and for Trump’s defense team, as well as ample time for questioning by senators, said the two people on condition of anonymity.

The vote would be held after the Senate receives the articles from the House, and a decision would be made on whether to call witnesses once the first phase of the trial is over, under the majority leader’s plan.

Senate Republican leaders did a final vote check Tuesday morning to make sure they have the votes for McConnell’s plan, according to a GOP senator familiar with the discussions.

That echoes the format of President Bill Clinton’s impeachment trial that was held 21 years ago, and McConnell has been able to persuade his members that Trump should be treated in the same fashion.

Democrats have been pressuring a cadre of persuadable Republican senators to demand a slate of four witnesses before the trial begins, an effort that ramped up Monday after former national security adviser John Bolton announced that he would testify if subpoenaed by the Senate.

But Bolton’s announcement did not appear to move any of the Republicans who may have sided with Democrats, such as Sens. Susan Collins of Maine and Lisa Murkowski of Alaska. Both indicated Monday that a decision on witnesses could be made further into the trial.

Sen. Mitt Romney, R-Utah, said he would like to hear from Bolton, but did not endorse subpoenaing him to do so.

“The Clinton trial process provided a pathway for there to be witnesses,” Romney said Tuesday. “And presuming we have a process like that, again I would be able to support the Clinton impeachment process.”

Sen. Chris Murphy, D-Conn., said Tuesday that Pelosi should go ahead and send the articles of impeachment to the Senate since it appears that McConnell is holding the GOP in line against a deal with Democrats on witnesses for a Senate trial.

“I think the speaker should send the articles regardless,” Murphy told reporters.

Asked whether the time has come, Murphy said: “I think the time has passed. She should send the articles over.”

Sen. Richard Blumenthal, D-Conn., said Pelosi “has to make a decision based on her own judgment, but my (Republican) colleagues will be in effect aiding and abetting a coverup.”

Asked if there was any point in continuing to hold the articles if Republicans are dug in, Blumenthal said, “Well, there has to be a trial, the Constitution requires it.”

Senate Minority Leader Chuck Schumer, D-N.Y., on Tuesday pressed his case for calling witnesses in a Senate impeachment trial, warning in a floor speech that Republicans in the chamber would be part of a “large and awful coverup” if they prevent a full airing of the evidence.

“A trial isn’t a trial without evidence,” Schumer said. “If the president is ultimately acquitted at the end of a sham trial, his acquittal will be meaningless.”

Sen. Elizabeth Warren of Massachusetts, a Democratic presidential candidate, said by blocking witnesses and documents in the impeachment probe, the White House has made it difficult to be impartial.

“So long as all we’re hearing is Trump squeezed the president of Ukraine for personal gain . . . then I don’t see how it’s possible not to vote for impeachment,” she said during an appearance.”But bring forward a defense if you’ve got one.”

Sen. Mark Warner, D-Va., pushed back on Tuesday on a plan by McConnell to delay a decision about witnesses, saying it “doesn’t pass the smell test.”

“My hope again will be that we get a chance to hear from everyone who’s got firsthand knowledge,” Warner told reporters. “These are individuals who could clear the president.”

“He’s a very smart guy, as you know, and I’m sure he would not have said what he said without gaming this thing out,” Cornyn told radio host Hugh Hewitt on his syndicated show.

Rep. Will Hurd, R-Texas, a member of the House Intelligence Committee, said he has no say in whether Bolton testifies before the Senate but would like to have heard from Trump’s former national security adviser during the House impeachment proceedings.

“I would have loved to see John Bolton in the House hearing,” Hurd said during an appearance on CNN.

Hurd said that he believes House Intelligence Committee Chairman Adam Schiff, D-Calif., will eventually summon Bolton to a hearing, adding, “I’d participate in the hearing, for sure.”

During the House impeachment proceedings, Hurd was critical of the Trump administration’s actions toward Ukraine, saying it amounted to “bungling foreign policy.” But Hurd said he had not seen sufficient evidence to vote for impeaching Trump.

“We haven’t taken that off the table,” Schiff said during an appearance on MSNBC. “I think what makes the most sense, though, frankly, is for him to testify in the Senate trial. . . . They should hear directly from one of the key witnesses.”