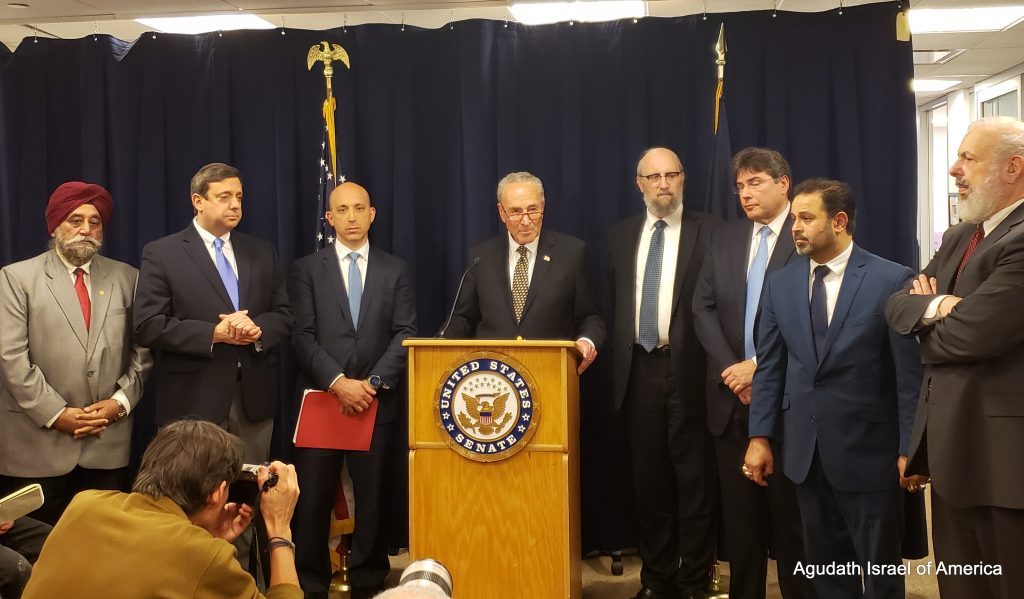 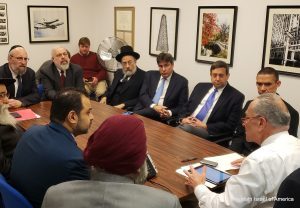 After two years of steadily increasing assaults against Orthodox Jews in the New York area, the lethal attack in Jersey City followed by a near-lethal one in Monsey have moved elected officials to call for stronger action to address the trend of anti-Semitic violence. While most of this effort has been at the local and state level, several members of Congress and advocates for the Jewish community have said that the federal government is obliged to play a key role in addressing the threat as well.

Proposals vary, with some focusing on security measures, law enforcement and prosecution, and others suggesting that the federal government needs to take a more active role in delving into the roots of the uptick in violence.

Rabbi Abba Cohen, Vice President for Government Affairs and Washington Director for Agudath Israel of America, said that in light of the growing and multi-faceted nature of the threat, the government’s responsibility to address what he referred to as a “national crisis” is by nature a broad one.

“Aside from the specifics of this program or that, I think a most fundamental role the federal government can play here is for both Congress and the administration to use its bully pulpit to send a clear message that anti-Semitism is something that is not acceptable and will not be tolerated in our society,” he told Hamodia. “I do not believe that there has been an increase in Jew-hatred, per se. Anti-Semitism, both actual and latent, has always been with us. What we do have now is an uptick in anti-Semitic incidents, and that has come as a result of the fact that there is no more “badge of shame” or societal disapproval or embarrassment associated with openly expressing anti-Semitic hatred through physical or verbal violence, and that is the evil root of what we are experiencing. “When Congress or the administration take concrete steps to call out and fight anti-Semitism and to protect the Jewish community, that sends an important signal that such hatred is not something that is acceptable under our laws or by the standards of our society,” he said.

Rabbi Cohen said that such a message of condemnation should be delivered by government, not only through formal and direct statements, but also through concrete legislative and public policy initiatives.

“The most immediate step the federal government can take is to raise the level of security and protection that the Jewish community enjoys, which starts with increases in security grants for our shuls, schools and community institutions. And there have been additional proposals that I think hold promise for making our communities safer.”

The attack in Monsey came not only on the heels of the Jersey City shooting, but also amid some dozen more minor assaults on Orthodox Jews in Brooklyn. While it is widely believed that all assailants acted alone, city and state officials have been largely silent on what is driving the sharp upswing in attacks.

In the immediate aftermath of the Monsey attack, Senate Minority Leader Charles Schumer called for a federal investigation to look for any linkage “direct or indirect — between this attack and the ones of the past several days.”

Should the Senator’s call lead to action, it would be the first major attempt to study the sharp rise in hate crimes aimed at the Jewish community in New York, in search of common causes.

“[Senator Schumer] wants the FBI to look at all facets of this in terms of patterns, possible links…He believes the current state of hate in America is a national crisis that demands a much stronger federal response,” a spokeswoman for the Senator told Hamodia.

Asserting that the threat level and the nationwide nature of the problem justified a federal investigation, Rabbi Cohen observed, “It certainly falls within the bailiwick of the federal government to look at the causes and solutions to anti-Semitic violence, which has essentially become a national problem that is too big for any single local government to evaluate or address adequately on its own.” Senator Schumer also requested “an assessment of what is currently being done by federal law enforcement officials to prevent these attacks and what more can be done.”

In a similar vein, freshman Congressman Max Rose (D-NY) announced that the Homeland Security Subcommittee on Intelligence and Counterterrorism, which he chairs, would dedicate its first hearing of the year to the federal government’s response to “the rise of anti-Semitic domestic terrorism attacks… and additional steps that can and should be taken to properly address the threats and ensure safety and security for Jewish communities.”

The Congressman, who represents Staten Island and some of southern Brooklyn, has been outspoken about efforts to combat violence associated with “white supremacy,” but until recently has not directed the committee’s attention to violent attacks in the New York area — committed almost exclusively by blacks.

The Department of Justice has taken over the case against Grafton Thomas, the alleged Monsey attacker, and he has been charged under several federal statutes. Yet it was not clear whether any federal entity had undertaken a broader study of the phenomenon.

At a press conference with representatives of the Jewish community and various other faith groups, Senator Schumer announced that he would seek to triple the funding for a program known as Non-Profit Security Grants (NPSG). The grants, initiated in the wake of attacks on the World Trade Center, are distributed by the Department of Homeland Security to non-profit organizations that are deemed high risk. Shuls, schools, and other Jewish institutions receive a large portion of the NPSGs. The program has seen gradual increases, but as threats have grown in recent years, funding has rapidly multiplied, and Congress recently approved $90 million in its 2020 budget.

Senator Schumer called for funding to be quadrupled, which would bring it to $360 million.

Mr. Nathan Diament, Executive Director for Public Policy at the Orthodox Union (OU), who played a leading role in developing and advocating for the NPSG, said that under the circumstances, such a dramatic increase is in order.

“I don’t think that we are currently in the same situation as Jews in Western Europe [where heavy security around Jewish institutions has become routine], but I do think there is a need on the short- term basis to ramp up security significantly,” he told Hamodia.

Rabbi Cohen applauded Senator Schumer’s proposal to significantly boost the federal security grant program, and said he will work closely with the Senator and other Capitol Hill leaders to provide more funds and offer Congress a better understanding of the scourge of anti-Semitism and effective ways to combat it.

Another proposal that has been discussed calls for DOJ funds, already available to support local police departments for special needs, to make protection of houses of worship a priority.

“Programs and funds do already exist that could be used for these purposes,” said Rabbi Cohen. “But in many cases, due to technical problems, they are not so easily available or accessible to our community to address its needs. After all, when they were written, they were geared to different kinds of threats against different kinds of institutions. So it would make sense to revisit and adjust the programs to make them more compatible and useful.”

Mr. Diament added that such funding would be useful in beefing up policing in smaller municipalities that have limited resources.

“The NYPD has alot of resources, but go across the river to Teaneck and the most you will see at a shul are off-duty police officers who are paid to be there out of the congregation’s pocket,” he said. “We think under the circumstances that these smaller police departments could use additional resources that they simply don’t have on their own.”

At the aforementioned press conference, Senator Schumer also referenced an existing program intended to provide $5 million for the DOJ to provide “technical, forensic, prosecutorial or any other form of assistance” to local officials in investigating or prosecuting hate crimes. Though passed into law in 2009, the statute has never been fully funded — something the senator called on Congress and the administration to rectify.

Mr. Diament, who serves as a member of the Department of Homeland Security’s Subcommittee for the Prevention of Targeted Violence against Faith-Based Communities, referenced a recent report by the committee on “Preventing Targeted Violence against Faith-Based Communities,” which proposed a list of suggestions as to how to address rising threats nationally. On Monday, he was present at a meeting with White House officials to discuss action the administration could take to implement the report’s findings.

Another talking point regarding ways to raise the bar in terms of federal efforts to combat violent “hate crimes” in general involves calls to create a statute for domestic terrorism.

“Based on what we’ve heard from law enforcement, the way the laws are currently structured, if a person comes from a foreign county and is engaged in certain activities that raise suspicions, the FBI has legal ways of opening an investigation and conducting surveillance, but that it’s much harder for them to do for an American citizen who might be planning an attack. It seems that what it would take to change that is a statue that specifically covers domestic terrorism,” said Mr. Diament.

Rabbi Cohen said that the creation of a statute for domestic terrorism is an idea worth considering and pursuing, and he pointed to other areas where adjustments to existing laws could be tailored to better address the threat faced.

“Hate crime prosecutions should be strengthened and broadened,” he said. “We have heard complaints that, under the present system, there are difficulties related to the reporting and investigation of such crimes, sometimes making it too long before action can be taken. We need a way to enhance and streamline the process — one that encourages reporting and broadens the jurisdiction of the federal law-enforcement agencies.”

A subject that has been the object of increased focus is the role of the internet — and specifically social media — in fostering violent ideologies and facilitating attacks. Attackers in Pittsburgh, Poway and Jersey City, left clear footprints on social media showing their malice towards Jews. Forums that focus on agitating against Orthodox communities, especially those based in the Lakewood, New Jersey or Monsey areas, have been faulted by community advocates as perpetuating anti-Semitism and even at times being sources of incitement.

“Social media has brought violent hate crimes to such a new and dangerous level. It’s a forum that as of now is essentially unfettered, and we are not finding a lot of sensitivity to our concerns with the owners of the companies that operate them,” said Rabbi Cohen. “It seems overdue for government to insist that the social media giants adhere to certain standards that would rein in this threat.”

While laws protecting freedom of expression and the sheer volume of internet rhetoric make it difficult for law enforcement to act or even monitor online hate speech, some in Congress have called increasingly on private companies like Facebook to take a more aggressive role in regulating the forums they provide.

“A big piece of this has to do with the internet and social media, and that is an aspect of combatting the current surge that only the federal government can do,” said Mr. Diament. “We are facing a reality where people who would have just been isolated individuals without the motivation and resources to commit harm can now attach themselves to a community that has a hateful ideology and find plans and plots for how to carry out an attack. There’s no local police department that can take that on; you need the federal government to step in.”