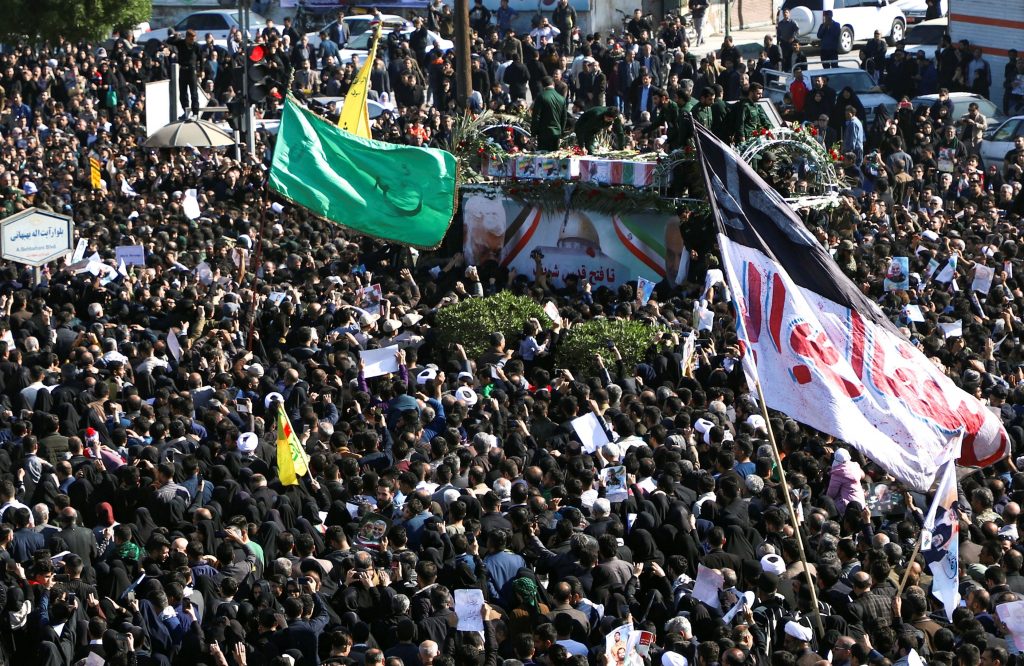 In the wake of the elimination of Iran’s Qassem Soleimani, the chances of war in the Middle East during 2020 have risen, a report by the Institute for National Security Studies said. The report by the Tel Aviv University-based security think tank was presented to President Reuven Rivlin Monday.

The report was an update of a previous report, reissued with an analysis of what the Soleimani elimination means for Israel. “The elimination of Soleimani makes an uptick in tension likely, and requires the formulation of a new Israeli security strategy,” the report said, pointing to northern Israel as the most likely target for attacks by Iranian-backed Syrian and Hezbollah terror forces. Israel has been working hard to deter Iranian efforts to strengthen the country’s base in Syria and Lebanon, but the elimination of Soleimani is likely to strengthen Iran’s determination to base itself on Israel’s borders – likely eliciting a stronger Israeli response that could quickly slide the region into war.

While Iran is unlikely to open outright hostilities immediately, both Tehran and Washington are likely to be feeling their ways in a new reality, the report said. Much depends on whether the Soleimani elimination signals a change in American policy to a more aggressive policy against Iran, or will remain an isolated event. “The U.S. and Iran will both be testing its steps, raising the level of uncertainty and instability, which was already high in the Middle East even before the elimination of Soleimani.” Instability makes war more likely, the report said.

Increased tension is also possible in the south, the report said. “If Israel and Hamas do not reach an agreement on a ceasefire and follow through on it, the chances of a military conflict will increase in Gaza, leading to increased tension that neither side wants,” it added.

Iran has sworn to retaliate against the U.S. and Israel in the wake of the elimination of Soleimani. Soleimani was the head of Iran’s Quds Force, Iran’s external “black ops” military group, which worked throughout the Middle East to advance Iranian interests. The Golan is among the fronts the Quds Force is very active in. The U.S. action is seen as a retaliation of the attempt earlier this week by Iran-backed Iraqi militia groups to take over the U.S. Embassy in Baghdad. Israel has begun to prepare itself for a possible Iranian attack, and security has been heightened on all fronts. The most likely target for an attack, if one does come, would be northern Israel, but no special instructions have been issued yet for residents of the region.

A report Sunday in Arabic media said that although Hamas was also a beneficiary of Iran’s largesse, the Gaza terror group has decided not to ratchet up tension. The report in the Al-Sharq al-Awsat newspaper said that Hamas had told Islamic Jihad and other groups that “it will not allow Gaza to become an operational field for international disputes taking revenge.”