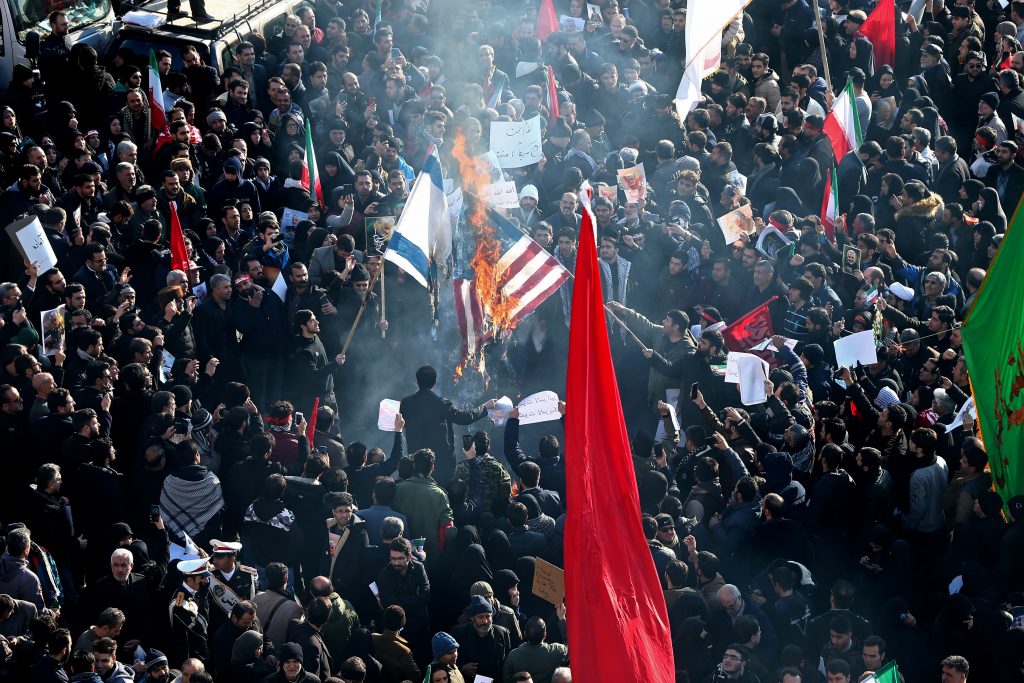 Iranians, who state media said numbered in the millions, poured onto the streets of the Iranian capital to bid farewell to the commander of the Quds Force, the unit in charge of foreign operations of Iran’s Revolutionary Guards.

The scale of the crowds in Tehran shown on local media seemed to be the biggest since the 1989 funeral of the founder of the Islamic Republic, Ayatollah Ruhollah Khomeini, who led the revolution that set Iran on its political collision cause with Washington.

Many Iranians considered Soleimani, who was a decorated veteran of the eight-year war with Iraq, a national hero. He was widely seen as the second most powerful figure in Iran after Khamenei.

The crowds chanted “Death to America.” One poster held aloft by a mourner read: “It is our right to seek a harsh revenge,” echoing comments by Iranian military and political leaders.

The coffins of Soleimani and the Iraqi militia leader, Abu Mahdi al-Muhandis, who was also killed in Friday’s attack, were draped in their national flags and passed from hand to hand across the heads of mourners in central Tehran.

The vast procession, which media footage showed blocking off entire streets of the capital, began at Tehran University and moved towards Azadi Square, or Freedom Square.

President Donald Trump has said the U.S. military had drawn up a list of 52 targets, the same number of U.S. Embassy hostages held for 444 days after the Iranian revolution, that he said would be hit if Americans or U.S. assets were attacked.

Trump, whose administration has imposed new sanctions on Iran since 2018 over its nuclear ambitions and other activities via proxies in the region, said the targets included cultural sites. His comments have drawn criticism from his U.S. political opponents.

“America and Zionism should know that my father’s martyrdom will lead to awakening … in the resistance front and bring about a dark day for them and flatten their homes,” Zeinab Soleimani, the commander’s daughter, said in her address to mourners.

Iran usually refers to Israel as the Zionist state and describes regional countries and other forces opposed to Israel and the United States as a “resistance” front.

“Crazy Trump, don’t think that everything is over with my father’s martyrdom,” she said.

Iran’s allies in the region have also gathered for the funeral, including Ismail Haniyeh, leader of the Palestinian group Hamas, who told the ceremony: “I declare that the martyred commander Soleimani is a martyr of Jerusalem.”

Iranian commanders have issued a range of threats since the U.S. strike at Baghdad Airport, although they have not offered any specifics about how they will respond.

“Even killing Trump is not a sufficient vengeance, and the only thing that can pay for the blood of martyr Soleimani is completely expelling America from the region,” Revolutionary Guards Aerospace Force chief Amirali Hajizadeh said in comments carried by Iranian media.

On Sunday, the Iraqi Parliament backed a recommendation by the prime minister for all foreign troops to be ordered out of Iraq.

Tehran has often said it would choose the time and place of any retaliation in past standoffs with Washington.

Soleimani was quoted as telling the United States in 2018: “If you begin the war, we will end the war.”