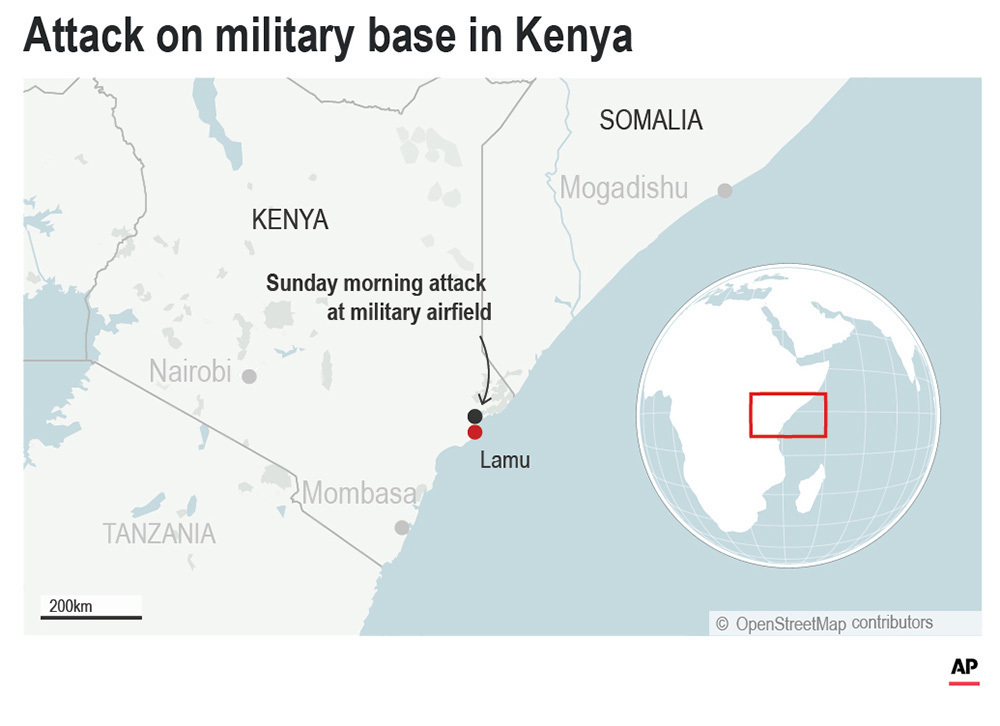 Al-Shabab terrorists overran a key military base used by U.S. counterterror forces in Kenya before dawn Sunday, killing three American Department of Defense personnel and destroying several U.S. aircraft and vehicles before they were repelled, U.S. and Kenyan authorities said.

The attack on the Manda Bay Airfield was the al-Qaida-linked group’s first attack against U.S. forces in the East African country, and the military called the security situation “fluid” several hours after the assault.

Al-Shabab, based in neighboring Somalia, claimed responsibility for the assault.

One U.S. serviceman and two contractors with the U.S. Department of Defense were killed in the fighting, according to a statement issued late Sunday by the U.S. Africa Command, or Africom.

The attack on the compound “involved indirect and small arms fire. After an initial penetration of the perimeter, Kenya Defense Forces and U.S. Africa Command repelled the al-Shabaab attack,” said the AFRICOM statement. “Reports indicate that six contractor-operated civilian aircraft were damaged to some degree. Manda Bay Airfield is utilized by U.S. forces whose missions include providing training to our African partners, responding to crises, and protecting U.S. interests in this strategically important area.”

Kenya is a key base for fighting al-Shabab, one of the world’s most resilient terrorist organizations. A large plume of black smoke rose above the airfield Sunday and residents said a car bomb had exploded. Lamu county commissioner Irungu Macharia told The Associated Press that five suspects were arrested and were being interrogated.

An internal Kenyan police report seen by the AP said two fixed-wing aircraft, a U.S. Cessna and a Kenyan one, were destroyed along with two U.S. helicopters and multiple U.S. vehicles at the Manda Bay military airstrip. The report said explosions were heard at around 5:30 a.m. from the direction of the airstrip. The scene, now secured, indicated that al-Shabab likely entered “to conduct targeted attacks,” the report said.

The U.S. military said only that “initial reports reflect damage to infrastructure and equipment.” The Kenya Civil Aviation Authority said the airstrip was closed for all operations.

The military’s Camp Simba in Lamu county, established more than a decade ago, has under 100 U.S. personnel, according to Pentagon figures. U.S. forces at the adjoining Manda Bay airfield train and give counterterror support to East African partners. A U.S. flag-raising at the camp in August signaled its change “from tactical to enduring operations,” the Air Force said at the time.

According to another internal Kenyan police report seen by the AP, dated Friday, a villager that day said he had spotted 11 suspected al-Shabab members entering Lamu’s Boni forest, which the terrorists have used as a hideout. The report said Kenyan authorities didn’t find them.

Al-Shabab has launched a number of attacks inside Kenya, including against civilian targets such as buses, schools and shopping malls. The group has been the target of a growing number of U.S. airstrikes inside Somalia during President Donald Trump’s administration.

The latest attack comes just over a week after an al-Shabab truck bomb in Somalia’s capital killed at least 79 people and U.S. airstrikes killed seven al-Shabab terrorists in response.

Last year, al-Shabab attacked Baledogle — a U.S. military base inside Somalia that is used to launch drone strikes — but reportedly failed to make their way inside. The terrorist group also has carried out multiple attacks against Kenyan troops in the past in retaliation for Kenya sending troops to Somalia to fight it.

“Launching a deliberate assault of this type against a well-defended permanent base occupied by [Kenya Defence Forces], contractors and U.S. military personnel required a great deal of planning, rehearsals, logistics and operational capability,” he said. Previous attacks against security forces have mainly been ambushes on Kenyan army or police patrols.

The early Sunday attack comes days after a U.S. airstrike killed Iran’s top military commander and Iran vowed retaliation, but al-Shabab is a Sunni Muslim group, and there is no sign of links to Shiite Iran or proxies.

“No, this attack was no way related to that incident” in the Middle East, an al-Shabab spokesman told the AP on condition of anonymity for security reasons.

One analyst, Rashid Abdi, in Twitter posts discussing the attack, agreed, but added that Kenyan security services have long been worried that Iran was trying to cultivate ties with al-Shabab.

“Avowedly Wahhabist Al-Shabaab not natural ally of Shia Iran, hostile, even. But if Kenyan claims true, AS attack may have been well-timed to signal to Iran it is open for tactical alliances,” he wrote.

But a former member of the U.N. committee monitoring sanctions on Somalia, Jay Bahadur, said in a tweet that “the attack is far more related to AS wanting a do over on their spectacular failure at Baledogle four months ago.”

When asked whether the U.S. military was looking into any Iranian link to the attack, U.S. Africa Command spokesman Col. Christopher Karns said only that “al-Shabab, affiliated with al-Qaida, has their own agenda and have made clear their desire to attack U.S. interests.”

The al-Shabab claim of responsibility said Sunday’s attack was part of its “Jerusalem will never be Judaized” campaign, a rarely made reference that also was used after al-Shabab’s deadly attack on a luxury mall complex in Kenya’s capital, Nairobi, in January 2019.

Somalia’s government, which is fighting al-Shabab with the help of a multinational African force, The Federal Republic of Somalia, joins the rest of the world in condemning the cowardly attack that targeted joint Kenyan and U.S forces based at Manda Bay Airfield, Kenya, earlier today.